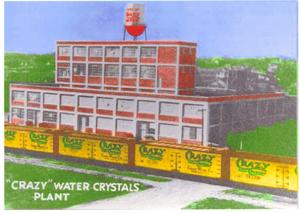 Crazy Water Crystals, a laxative made by the Crazy Water Crystals Company of Mineral Wells, Tex., became known to many rural and working-class North Carolinians during the Great Depression through the company's sponsorship of "hillbilly" music programs on radio stations such as WBT in Charlotte. The crystals-also advertised and sold under such names as Crazy Mineral Water and Crazy Fiz-were produced by the evaporation of mineral water drawn from "world-renowned Crazy Wells." When reconstituted, they were said to aid in the treatment of a variety of intestinal disorders resulting from "faulty elimination."

WBT's salesman-announcer Grady Cole (at the station from 1930 to 1961 and well known as "Mr. Dixie") advertised the product as "the crystals in the bright green box." Popular radio shows featuring local musicians-such as Charles Crutchfield's Briarhoppers, Dick Hartman's Crazy Tennessee Ramblers, Mainer's Crazy Mountaineers, and Fisher Hendley and his Carolina Tarheels-were frequently interspersed with commercials for Crazy Water Crystals. The willingness to spend large amounts of money on radio advertising in the midst of the Depression reflected both radio's selling power and the popularity of the music used to push the product. A mix of homespun humor, flamboyant salesmanship, and extravagant health claims made up the Crazy Water image. Print ads included pictures of a large, modern processing facility in Mineral Wells as well as strings of refrigerated cars painted with the Crazy Water logo. Drugstores often displayed prominent arrangements of the trademark green boxes, augmented by green and white streamers.

The relationship between Crazy Water Crystals and WBT lasted until about 1937, when J. W. Fincher, Crazy Water's North Carolina representative, severed it, apparently over financial disagreements. The product continued to be advertised over other Piedmont stations, however, until a drop in demand forced cutbacks. The company's subsequent demise by the late 1930s has been attributed to investigations by the Food and Drug Administration and the Federal Trade Commission, both concluding that the outlandish claims of Crazy Water's effectiveness were clearly exaggerated.