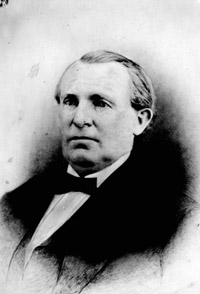 Curtis Hooks Brogden (1816-1901) was elevated to the Governor’s Office upon the death of Tod R. Caldwell and, over the course of his administration, faced strong opposition from a heavily Democratic legislature. The son of Pierce and Amy Bread Brogden, he was born on November 6, 1816, into the yeoman farmer class of Wayne County society. He attended the local field schools when possible, but essentially was self-educated. Reaching his impressionable teen years during the height of Andrew Jackson's popularity in North Carolina, he became an advocate of Old Hickory’s brand of democracy. Just shy of his twenty-second birthday, he entered the race in 1838 for the legislature as the representative from Wayne County. He was elected and became the youngest member of that session of the House of Commons. Thus commenced a career of public service that spanned half a century and included seven terms in the lower house, three in the state senate, a decade as state comptroller, a year and a half as lieutenant governor, two and a half years as governor, and two years as a congressman.

As the nature of the Democratic Party changed in the last decade of the antebellum period, Brogden allied himself to the philosophy and policies espoused by William W. Holden in the North Carolina Standard. He admired and supported the editor and the two formed a lifelong friendship. The 1857 General Assembly elected Brogden state comptroller, a position he held through the Civil War and its immediate aftermath. In 1862 Brogden broke with the Democrats and voted for Zebulon B. Vance in the gubernatorial election. He quietly supported Holden during the war and afterwards followed him into the Republican Party. A large black population in Wayne County helped return him to the state senate in 1868 and reelected him two years later. He favored the Reconstruction Acts and military rule, and he wrote a number of letters justifying Governor Holden’s actions in regard to the Ku Klux Klan uprising. As a state senator, he voted for Holden’s acquittal in the impeachment trial.

Brogden’s Republican loyalty and service to the party were rewarded in 1872 when he was nominated to run as lieutenant governor on the ticket with incumbent Tod R. Caldwell. A year and a half later, on July 11, 1874, Caldwell died in office and Brogden became governor. In that post, Brogden faced a hostile Democratic legislature (fewer than one-third of its members were Republicans) but won some support because he was less aggressive than his predecessor and more willing to compromise. He called for consolidation of the state’s railroad holdings; an adjustment in, but not repudiation of, the state debt; and a higher caliber of education, placing emphasis on the need for a state-supported black college. During his term of office the University of North Carolina reopened in September 1875.

Governor Brogden chose not to seek re-election in 1876, preferring to stand as a candidate for Congress. Elected in the Republican primary over incumbent John A. Hyman, the first black congressman from North Carolina, Brodgen represented the Second District for one term. There he worked to gain for his district and for North Carolina internal improvements. Brodgen was not renominated for the post and Democrat William W. Kitchin took the seat.

For the next eight years, the former governor encountered frustration in his attempts at elected office. His last victory came in 1886 when he represented Wayne County in the state House for one term. Brogden, who never married, retired to his home in Goldsboro where he died on January 5, 1901, at age eighty-four. He was buried in that city’s Willowdale Cemetery.