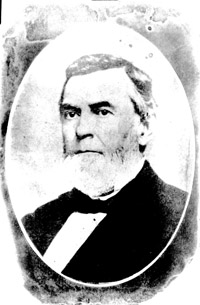 Thomas Bragg (1810-1872) was a member of the prominent Bragg family of Warren County; Confederate General Braxton Bragg was his brother. Born on November 8, 1810 in Warrenton, he was one of the six sons of Thomas Bragg, a carpenter, and his wife Margaret. Thomas Bragg read law with John Hall of Warrenton and set up practice in Northampton County in 1833. He was appointed county attorney and became entranced with politics. But he was a Democrat in a Whig stronghold; consequently, his early political career was less successful than his law practice. He served one term in the state House in 1842-43. He married Isabelle Cathbert in October 1837; they would have seven children.

Through his work at the national Democratic conventions in 1844, 1848, and 1852, Bragg rose to a party leadership position in the state. Pitted against Whig Alfred Dockery in the 1854 gubernatorial election, he squeaked out a victory by just over 1,400 votes out of more than 94,700. Two years later, with the Whig party in rapid decline, Bragg easily defeated John A. Gilmer in the first state election to see more than 100,000 votes cast.

His two-term administration reflected a blending of old Whig and Democratic programs. The law eliminating the freehold requirement to vote for state senators was finally passed; Bragg continued support for internal improvements, particularly the North Carolina Railroad; and he pushed for an improved banking system to help stabilize the economy. Yet, the threat of secession hung over his entire tenure. Bragg was a strong states’ rights Democrat who vocally objected to encroachments by the federal government, but he urged moderation in resistance and did not favor secession. He was elected to the United States Senate in 1859 and served until March 1861. He made few public statements about the looming crisis; yet he privately lamented to his friends that he saw no future success in leaving the Union even though it might seem justified. Despite his concerns for the South, Bragg would not abandon North Carolina in the event of secession, stating “I will stand by the old State, and if the worst shall ultimately come, as I very much fear, I will go down with her, and when all is over I will do what I can to save what is left of her.”

He returned to Raleigh after leaving the Senate only to be called a few months later by President Jefferson Davis to replace Judah P. Benjamin as attorney general of the Confederacy. Bragg began his duties in November 1861, but the Davis administration was fraught with political bickering and Bragg resigned on March 18, 1862. He spent the last years of the war in Raleigh.

The war virtually bankrupted Thomas Bragg; however, he reestablished his law practice, earning a reputation as a strong defender of constitutional law and personal liberty. Feeling that those rights had been violated by Governor William W. Holden in his struggles with the Ku Klux Klan, Bragg joined the team of prosecutors in the impeachment and removal of the governor from office. Thomas Bragg died at his Raleigh home on January 21, 1872, and was buried in Oakwood Cemetery.

Montgomery, Lizzie Wilson. 1996. Sketches of old Warrenton, North Carolina: traditions and reminiscences of the town and people who made it. Spartanburg, S.C.: Reprint Co.