The growth of book publishing in North Carolina came late relative to other states, primarily because of the state's early agricultural economy. Most books owned in colonial North Carolina were imported. The first recorded printer of books in North Carolina was James Davis, a Virginian who established a shop in New Bern in 1749 at the behest of the colonial Assembly and published mostly legislative acts.

The marketing and distribution of books was limited in North Carolina until the early nineteenth century as a result of the state's high illiteracy rate. Considering the effort involved in transporting books on long sea voyages or overland journeys, it is clear that books owned by early American settlers were valued possessions. Settlers needed books to fulfill practical purposes, and their meager libraries contained volumes on subjects such as exploration, religion, and law. Books exclusively for entertainment were not popular until later in the eighteenth century. 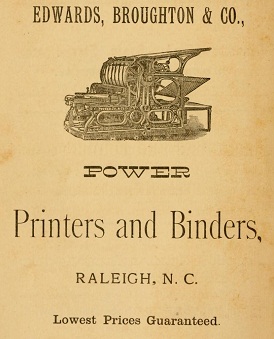 Several booksellers existed in North Carolina during the late eighteenth and early nineteenth centuries, and many printed the books that they sold. In the eastern part of the state, booksellers were active in Edenton, New Bern, Swansboro, and Wilmington; farther west, Salisbury, Salem, and Morganton all had booksellers. Raleigh featured two successful printers and booksellers, Edwards & Broughton and Branson & Farrar. Selling books by subscription was common in the state from the early eighteenth century to the mid-nineteenth century. The interests of North Carolinians had by then expanded to include history, poetry, biography, literature, essays, geography, travel, science, foreign language, and shorthand as well as religion and law.

Records of nineteenth-century publishing endeavors are scarce and frequently do not distinguish among printers, royalty publishers, and self-publishing authors. E. J. Hale & Son, founded in 1825 in Fayetteville, published mostly books of local interest and soon became one of the most important book publishers in the South, as well as the publisher of a newspaper, the Observer. A study of the importation into North Carolina of books published by Ticknor & Fields in the United Kingdom suggests a small but active book trade based in Raleigh and Wilmington around 1856. However, it would not be until nearly the start of the twentieth century that book publishing in North Carolina would thrive with permanence. In 1888 the trade journal Publishers Weekly listed only one North Carolina firm, Alfred Williams & Company of Raleigh, in its publishing directory. In 1900 three firms were listed, including one in Charlotte. By 1919 the journal listed publishing enterprises in Asheville, Charlotte, Concord, Chapel Hill, and Raleigh.

In the early twentieth century, university presses became important publishing entities throughout the United States. The University of North Carolina Press, founded in 1922, was the first university press in the South and a pioneer in the publication of books on regional topics. The UNC Press list has featured groundbreaking studies of the South, including books about African American life and works on regional folkways as well as popular works such as cookbooks and nature guides. The press at Trinity College in Durham began as an intermittent program, originally publishing papers of the historical society of the undergraduate division. After the founding of Duke University, Trinity College Press became Duke University Press, issuing its first book, E. Malcolm Carroll's Origins of the Whig Party, in 1925. Duke University Press continues to publish more scholarly than regional works, as well as a few medical titles and a large number of scholarly journals.

Book publishing in North Carolina was further enhanced by John F. Blair, Publisher, which was established in 1954. As an editor at the UNC Press, Blair had come to believe that many worthwhile and entertaining regional works went unpublished because of the strict scholarly requirements of university presses. Blair subsequently published hundreds of books of North Carolina poetry, literature, and folklore as well as popular regional cookbooks and travel guides. John F. Blair, Publisher, has also distributed titles from other publishers, including Down Home Press, Bank Channel Books, and Crane Hill Publishers.

At least 25 notable book publishers, including university presses, operated in North Carolina in the early 2000s. Most were located in the Triangle area (Raleigh, Durham, and Chapel Hill) or the Triad (Winston-Salem, High Point, and Greensboro). Many commercial houses produce hardcovers and trade paperbacks (originals and reprints) of mainly regional nonfiction and some fiction. McFarland & Company, Inc., Publishers, based in Jefferson, is the state's most prolific commercial publisher, averaging about 135 titles per year (nonfiction, primarily reference, technical, and educational resources). Algonquin Books of Chapel Hill was founded in 1982 by Louis D. Rubin Jr., a respected author, critic, editor, and authority on southern literature at the University of North Carolina at Chapel Hill. Algonquin specializes in fiction and literary nonfiction and has published the works of many important local authors, including Clyde Edgerton, Lee Smith, Jill McCorkle, and Kaye Gibbons. Other large publishers in the state include the Carolina Academic Press (legal casebooks and academic studies); Lark Books (nonfiction on crafts and leisure); and SAS Institute, Inc. (nonfiction, including technical titles, computer resources, and textbooks).