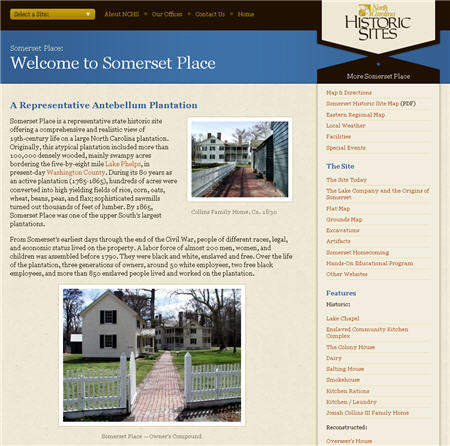 One hundred fifty years ago, nearly all North Carolinians made their living by farming. And even the majority of those who did not actually farm were still tied to the state’s agricultural economy: merchants who bought and sold farm produce, craftsmen who made and repaired tools and equipment, and mill workers who processed crops into goods that could be sold or traded, among others. Some of these people also farmed part of the time. During the antebellum period, basically two types of landed, or landowning, people were found in North Carolina. A minority of them were wealthy planters. The larger group was often called yeoman farmers, or sometimes common whites.

Planters specialized in raising cash crops like tobacco and cotton. In order to make money from these crops, planters had to raise them in large amounts with cheap labor and then transport them inexpensively to market. Planters generally owned enslaved Africans and later African Americans, on whom they relied to provide cheap labor. They ideally situated their plantations near the coast and along navigable rivers or, later, close to railroads to ensure inexpensive, reliable transportation.

An example of one small planter, who kept a journal, was William Wallace White. White owned a 614-acre plantation called Holly Hill in Warren County, and in 1860 he owned approximately fifteen slaves. On his plantation, these enslaved persons produced tobacco, wheat, oats, corn, and potatoes; raised hogs; and kept a dairy herd of eleven cows. White’s plantation also had an extensive garden for his family, as well as gardens for his slaves. His slaves usually worked all day and often into the evenings, six days a week. But, according to his journal, in August 1857, as his crops were laying in, he gave his enslaved workers a daylong “holiday”—he decided to throw them a barbecue. White also lightened their workloads around Christmas, and, judging from his journal, little work of consequence was done in January.

Most white North Carolinians, however, were not planters. They owned their own small farms and frequently did not own any slaves. These farmers practiced a “safety first” form of subsistence agriculture by growing a wide range of crops in small amounts so that the needs of their families were met first.

Emsley Burgess of Randolph County was an example of a yeoman farmer. Burgess, who kept a journal, lived in a log cabin with his wife and eight children. A Quaker who owned no slaves, he relied on the labor of his children and relatives, a few neighbors, and some hired help—often poor whites looking for work—to maintain his small farm. He was often busy. The forty-three-year-old Burgess recounted a day’s accomplishments one October:  “... put up husks at the barn sowed some wheat gathered corn over the creek sowed wheat hauled a load of corn.” Still, he could take days off and often enjoyed summer evenings visiting neighbors and relatives and eating watermelon.

Burgess grew corn, wheat, rice, potatoes, and oats, and kept a large garden where he grew peas, onions, beets, lettuce, radishes, watermelons, beans, and cucumbers, among other vegetables. Burgess also had patches of cotton and flax to satisfy some of his family’s textile needs. To make money for buying household items he could not raise or produce himself, Burgess made barrels and metal cans to sell and repaired stovepipes, gutters, and household items.

Despite their economic and social differences, White and Burgess and the people who labored with and for them shared a common calendar of work. Both planters and farmers organized their lives according to daily, weekly, monthly, and yearly routines based on the seasonal rhythms and demands of growing crops and raising animals for food and money.

To accomplish these routines, planters and farmers usually relied heavily upon tradition—an accumulated knowledge of experience that was passed on from one generation to the next. Both Burgess and White relied on tradition in their agricultural practices when they planted their crops in individually made hills instead of furrows, or rows, for example, and when they allowed their hogs and cattle to range freely through the woods.

But during the antebellum period, some people began to deviate from these traditional methods and look toward science to assist them in producing higher yields and greater profits. By the 1850s, some were looking toward new information that was becoming available through agricultural societies, books, and newspapers. White’s interest in “scientific farming” is reflected in his use of guano as a fertilizer.

Some yeoman farmers like Burgess were adopting “progressive” agricultural techniques on a more modest scale. Burgess apparently rotated his crops and planted clover and timothy (a type of hay) in fields that had previously grown wheat or corn to save and replenish the nutrients in his soil. He also spread leaves and manure onto his fields and plowed them into the soil.

Plenty of Work to Do

Antebellum planters and farmers faced a labor-intensive, never-ending cycle of planting, cultivating, harvesting, and processing crops. They seldom had the assistance of mechanical labor-saving devices. All work had to be accomplished by hand with only the aid of draft animals like horses, mules, or oxen. Even the removal of insect pests had to be done by hand. Burgess wrote on April 9, 1847: “I cleaned the appletrees of catterpillars.” White’s enslaved workers also spent many late summer and early fall days “worming,” or picking worms, in his tobacco fields by hand. Seemingly simple tasks took a great deal of time and effort, so planters and farmers seldom had little or no work to do.

When an important task had to be accomplished, work continued until it was completed. At tobacco harvest time, White’s slaves spent long days in backbreaking labor cutting, sticking, and housing the crop. White often noted that they did not cease work until after ten o’clock in the evening.

Bad weather sometimes postponed outdoor work, but other tasks always awaited. February 26, 1847, dawned cold and cloudy, but farmer Burgess had his two hired boys haul wood until noon, when he directed them to construct a shelter for the woodpile. When rain began, he sent them indoors to shuck corn for the rest of the day. His two hired boys husked and shelled corn until ten o’clock on one April night in 1846.

Though yeoman farm women sometimes worked in the fields and at chores alongside men, they usually tended to their own tasks and responsibilities. Every day, for example, these women built and maintained fires for cooking, heating, and lighting, and hauled water from a spring, a stream, or a well to the house for cooking, drinking, and washing. They cared for children and prepared and served meals. At least weekly, they had laundry to wash and iron and bread to bake. In addition, women regularly fed livestock, milked cows, and churned butter. On a seasonal basis, they made soap and candles, maintained gardens, and preserved foods for use later in the year. Women were also responsible for certain aspects of textile production such as spinning, dyeing, sewing, and sometimes weaving.

Enslaved women had to perform not only the domestic chores of their own households but frequently those of their masters, too. Furthermore, they typically worked in the fields alongside men. White frequently mentions having “all hands” working in the fields.

Children were of course expected to contribute to work around their parents’ farm or owner’s plantation. As soon as possible, they worked at nearly all the same tasks as adults.

For some planters, the monetary rewards were great. But for farmers like Burgess, the rewards were considerably more modest. Burgess by his own admission was not a successful farmer. “I cannot help feeling rather discouraged and under the weather fer the hand of misfortune has seamed to laid heavy on me,” he wrote after the death of one of his horses in April 1847. Still, possibly recalling the pleasures of visiting friends and relatives, the fellowship of his Quaker meeting, and the taste of his watermelons, he concluded that all was not bad, for there “has been some sunny spots too in the path.”

At the time this article was written, Charles LeCount was the curator of agriculture and industry at the North Carolina Museum of History.

this website is very unique and it is very great to use for many occasions........