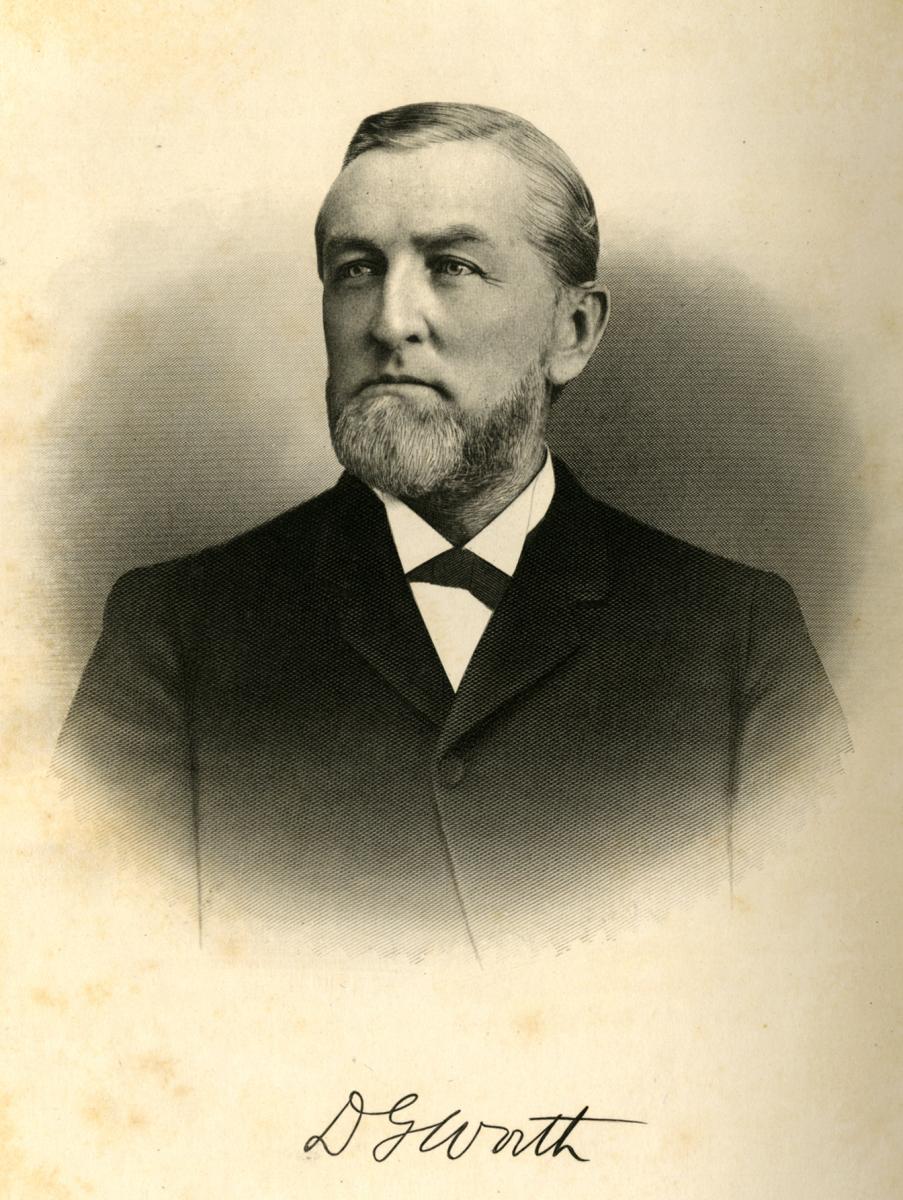 David Gaston Worth, merchant and state salt commissioner during the Civil War, was born in Asheboro, the only son of eight children of Jonathan and Martitia Daniel Worth. His father was state treasurer during the Civil War and governor during Reconstruction. Young Worth acquired his early education at his home in Asheboro. He entered The University of North Carolina at age seventeen and was graduated as one of the first honor men in the class of 1853. At Chapel Hill Worth was a member of Delta Kappa Epsilon fraternity, an association he continued for the rest of his life, contributing to the building and furnishing of the fraternity hall. He was a large contributor towards the construction of the alumni hall and in 1891 donated $500 to help in remodeling the university chapel.

Following graduation he entered the turpentine business in Harnett County, and in 1861 he moved to Wilmington to associate with his uncle, N. Green Daniel, his mother's younger brother, in the merchandise and commission business. The store of Worth and Daniel was located on Water Street between Princess and Chestnut. After Daniel's death in 1870, Worth became a partner with his uncle, Barzillai Gardner Worth, in the firm of Worth and Worth, a wholesale grocery business. Their store was destroyed by fire in February 1885, and a new store was designed and built by James F. Post at Nutt and Mulberry streets. Mulberry afterwards became Grace Street.

Active in civic affairs, Worth served as president of the Produce Exchange and of the Chamber of Commerce; for several years he was a member of the board of aldermen. He also belonged to the Wilmington Steam Fire Engine Company No. 1 and Wilmington Lodge No. 319 of the Ancient Free and Accepted Masons. He was associated with the YMCA and sat on the board of directors of the First National Bank.

In July 1863 Governor Zebulon B. Vance appointed him salt commissioner of North Carolina in place of his uncle, John Milton Worth, who had resigned. The State Salt Works, located at Myrtle Grove Sound, was about seven miles from Wilmington. He held this position until the end of the war. Also during the war he was the overseer of his sister Roxana's plantation in Harnett County, as her husband, John McNeill, had died in 1857.

In 1839 his father was one of five commissioners appointed to raise funds to establish a school for girls in Asheboro. One of the first teachers in this academy was Julia Anna Stickney. Born on 23 Oct. 1830 in Rockwell, N.Y., Julia was the daughter of William and Caroline A. Stevens Stickney. She attended an academy in Sandy Hills, N.Y., a seminary in Poultney, Vt., and Troy Female Seminary (later the Emma Willard School) in Troy, N.Y. David Gaston Worth and Julia Anna Stickney were married on 7 July 1853. They had eight children, of whom only three survived childhood: Charles William (1861–1930), who became associated with his father in business; Dr. George Clarkson (1867–1936), a medical missionary in China; and James Spenser (1869–1900). At one time the Worths lived at 410 South Second Street in Wilmington. Julia's brother, Henry Stickney, entered Wilmington in February 1865 with the 169th New York Volunteers, one of the first units of the Federal troops to enter the city. Another brother, Charles, was killed at South Mountain, Md., during the war.

The Worths were members of the First Presbyterian Church, and he was elected a deacon in 1864 and became a ruling elder in 1891. His funeral was held in the church, and both he and his wife, who died in 1911, were buried in Oakdale Cemetery, Wilmington. A memorial service was held for Worth at The University of North Carolina. He was characterized by an associate as "quiet, modest, conscientious."

Julia A. Worth to David Gaston Worth, 27 Feb. 1865 (copy in possession of Leora Hiatt McEachern).