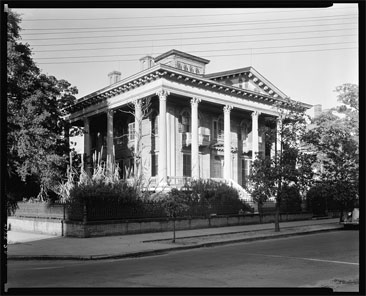 James Francis Post, railroad official and a native of Wilmington, was the son of James Francis and Mary A. Russell Post. His father was born in New Jersey and moved in 1849 to Wilmington, where he became one of the first men to devote himself exclusively to the practice of architecture in North Carolina. He enlisted in the Confederate army and served throughout the Civil War as a lieutenant, having charge of the fortifications in the harbor. Later he was the architect of City Hall, St. Paul's Lutheran Church, the John D. Bellamy mansion, and other buildings in Wilmington.

The younger Post was educated in the public schools and at Wilmington Academy. At age nineteen he entered the railroad service as a freight clerk of the Wilmington and Weldon Railroad, a part of the Atlantic Coast Line system. He held various positions in the company and was treasurer of the entire system for the last sixteen years of his life.

A Methodist, Post was superintendent of the Sunday school at Grace Church for twenty-five years, a magistrate for ten years, and at one time acting mayor. Interested in education, he was chairman of the Wilmington School Board and a trustee of the Agricultural School for Negroes and for the State Normal School for Women. He was a member of St. John's Masonic Lodge, Woodmen of the World, Knights of Pythias, Cape Fear Club, and Cape Fear Country Club. He also was a member of the Society of Railway Financial Officials of America, an honorary Fellow of the American Geological Society, and a member of the National Society of Political Economy.