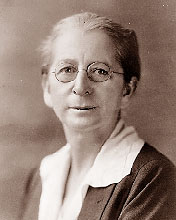 Mary Bayard Morgan Wootten, photographer and artist, was born in New Bern, the daughter of Mary Devereux Clarke and Rufus Morgan. Her maternal grandmother was Mary Bayard Devereux Clarke, author and editor; her maternal grandfather was William J. Clarke, commander of the Twenty-fourth Regiment, North Caroline Troops, in the Confederate army. She attended New Bern Collegiate Institute and in 1892 enrolled for a year's instruction at the State Normal and Industrial College (now the University of North Carolina at Greensboro).

When she was seventeen financial necessity prompted her to accept a position as an art instructor in the Arkansas School for the Deaf. This opportunity came through the influence of her uncles, Francis D., head of a school for the deaf in Flint, Mich., and Thomas P. D. Clarke, a teacher of the deaf in Vancouver, Wash. It probably also was they who persuaded her to move the following year to the Georgia School for the Deaf, where she taught for four years. While there she met and in 1897 married Charles Wootten; they had two sons, Charles Thomas and Rufus Morgan. The couple separated in 1901, when she returned to New Bern to support her sons and to help her mother care for her aged stepfather, a half brother, and a half sister.

Painting flowers on calendars, greeting cards, fans, and china provided a meager livelihood for two years. In about 1902 she designed the first Pepsi-Cola trademark at the request of the pharmacist, Caleb D. Bradham, a neighbor who invented the drink. With a borrowed camera she supplemented one of her calendar paintings with a photograph. Orders for photographs followed and she soon bought her own camera. Basic instruction and encouragement from a local portrait photographer led her to open a studio on a lot by her mother's home in New Bern. 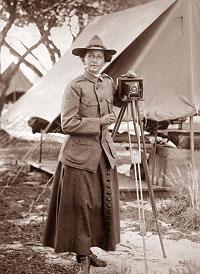 Business for a free-lance photographer was limited in the summer, and Mrs. Wootten sought supplementary work in nearby Camp Glenn, where the North Carolina Guard trained during the summer. The morale-boosting effect of her photographic services and the publicity they provided for the Guard prompted the commanding general to offer her official membership in the Guard with a uniform and the title, chief of publicity. This association continued until after World War I, when the U.S. commanding general at Fort Bragg asked her to set up a studio on the base.

In 1914 Bayard Wootten made perhaps the first aerial photographs by a woman. In a Wright Brother's plane, with a camera aimed straight down between her feet, which rested on the metal struts, she took views of New Bern and the Neuse River. In 1917 Albert Rogers, a New York advertising executive and manager of the Grand Central Palace, the city's exposition building, was so impressed with Mrs. Wootten's work that he used her photographs for sales promotion, and he appointed her official photographer for the Palace. This led to a brief period of operating her own studio in New York.

Mrs. Wootten bought her first car, a Ford touring model, in 1918 and began a statewide portrait photographic service. Through a chain of agents in various towns who made appointments for sittings according to a preplanned schedule, she had clients from the mountains to the coast. Her innovative idea of posing her subjects in their home or other familiar environment instead of before a velvet curtain in a studio attracted favorable notice and imitation. Later, before there were good roads in many parts of the state, she extended her work to taking scenic pictures all over North Carolina for book illustrations and murals.

Through her affiliation with the National Guard and her growing reputation over the state, Mrs. Wootten came to the attention of a wide range of people. Among them, in 1919, was Professor Frederick Koch, director of the Carolina Playmakers, who invited her to become the Playmakers photographer. This Chapel Hill association was expanded in 1921 to include the Yackety Yack, the university's yearbook, and these contracts continued until 1947. In 1928 she opened a studio in Chapel Hill, where her half brother, George Moulton, later joined her in business.

After 1928 she spent most of her time in Chapel Hill, where, in addition to doing portrait work at her studio and traveling across the state, she collaborated with a number of authors in providing illustrations for their books. Among these were Backwoods America by Charles Morrow Wilson; Cabin in the Laurel by Muriel Sheppard; Charleston, Azaleas, and Old Bricks by Samuel Gaillard Stoney; Old Homes and Gardens of North Carolina, published for the Garden Clubs of North Carolina with text by Archibald Henderson; New Castle, Delaware, 1651–1939, by Anthony Higgins; and From My Highest Hill by Olive Tilford Dargan.

Wide recognition also came to Mrs. Wootten through the exhibition of her work. In addition to numerous shows in North Carolina, her photographs were displayed in Charleston, Richmond, Boston, Chicago, and New York.

After taking approximately 600,000 pictures, she retired from working behind the camera in 1948 after suffering an eye hemorrhage. Nevertheless, she continued to direct the operations of her Chapel Hill studio until 1954, when she returned to New Bern. She died there five years later and was buried in Cedar Grove Cemetery. There is a large collection of Mary Bayard Wootten's photographs and negatives in the North Carolina Collection at the University of North Carolina, Chapel Hill.