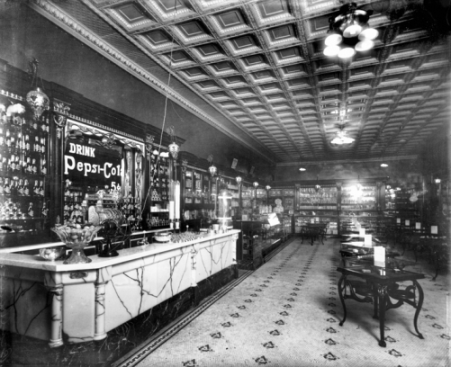 Pepsi-Cola, advertised as the "Taste Born in the Carolinas," is one of many carbonated soft drinks invented in the South between the Civil War and World War I, when the temperance movement, poverty, and the relatively high prices of coffee and tea conspired with the climate to create a regional market for inexpensive, nonalcoholic social beverages. Caleb Bradham (1867-1934) first concocted Pepsi-Cola as a fountain drink at a pharmacy at Pollock and Middle Streets in New Bern in 1893. Three years later he formally gave "Brad's Drink" a new name-Pepsin Cola. He began bottling and marketing Pepsi under its present name in 1898 and founded the Pepsi-Cola Company in 1903. By World War I Pepsi was sold in 24 states. During the war, Bradham invested heavily in sugar in order to ensure a reliable supply, and the glut of 1920 abruptly ended his prosperity and his ownership of the company. Pepsi-Cola changed hands repeatedly over the next decade, but bottlers who had large stocks of syrup kept some Pepsi drinkers satisfied without interruption.

Unable to get a high-volume discount from Coca-Cola, Loft's, a chain that sold fountain Coke in more than 100 candy stores, bought Pepsi-Cola (then headquartered in Richmond) in 1931 for $14,000. After its chemists had removed pepsin from the recipe and made other changes probably still in effect, the firm began to sell Pepsi at its fountains, then in bottles. In 1934 Loft's fired the first accurate shot in the "cola wars" when it introduced a 12-ounce Pepsi that sold for the same price as the 6.5-ounce Coke. Pepsi-Cola turned handsome profits ($2 million in one year) through a struggle for control that financier Walter Mack won in 1939.

Mack was new to the soft drink industry, but he seems to have realized quickly that Pepsi is hard to distinguish from other cola drinks. (The similarities may not be accidental; the Coke recipe was not guarded closely during the first few years of its existence.) One way to inspire brand loyalty to such products is to price them competitively, as Loft's did. Another is to drum imaginary or unimportant distinctions into consumers' heads. Under Mack, Pepsi-Cola (now based in New York) began to advertise aggressively, hiring skywriters, saturating the airwaves with its jingle "Pepsi-Cola hits the spot," and placing countless ads in national magazines.

During World War II, Pepsi-Cola circumvented some freezes and shortages by building a syrup factory in Mexico. Ignoring the lesson of Bradham's ruin, the company agreed to buy all the excess sugar produced by that country. The gamble succeeded, enabling Pepsi-Cola to meet the burgeoning demand for soft drinks at defense plants and military bases and lay the foundation for later growth. Wartime hardships and the postwar multiplication of supermarket chains, which preferred national brands, forced many small competitors out of business. Pepsi-Cola and Coca-Cola profited accordingly.

In 1965 PepsiCo, Inc., was founded by the merger of Pepsi-Cola and Frito-Lay Corporation. Herman Lay became chairman of the board of directors of the new company, and Donald M. Kendall became its president and chief executive officer. That year PepsiCo reported sales of $510 million and had 19,000 employees. Since the late 1960s, both PepsiCo and Coca-Cola-huge multinational corporations-have followed strategies based on diversification, new brands (36 between 1970 and 1988), and lavish advertising. Both changed the recipes of their flagship brands. In 1985 Coca-Cola unveiled New Coke, formulated to taste more like Pepsi, but bowed to public pressure and hastily restored old Coke under the name Coke Classic. Pepsi introduced huge national advertising campaigns and giveaways beginning in the 1980s under the theme "Pepsi: The Choice of a New Generation." In the late 1990s and early 2000s, PepsiCo offered a variety of new soft drink brands as well as the original Pepsi-Cola. These included vanilla-, cherry-, and lemon-flavored Pepsi, Diet Pepsi, Mug Root Beer, Mountain Dew, Lipton Iced Tea, Aquafina bottled water, and Sierra Mist.

William Poundstone, Big Secrets: The Uncensored Truth about All Sorts of Stuff You Are Never Supposed to Know (1983).