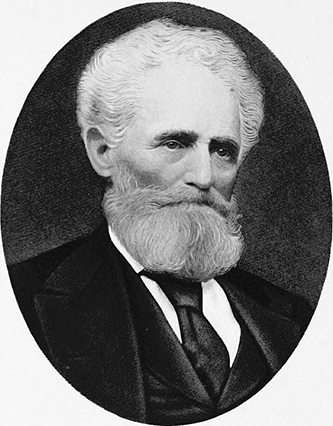 Nicholas Washington Woodfin, lawyer, legislator, and planter, was deeply interested in internal improvements, public education, scientific agriculture, and industrial development. Born in the Mills River section of that part of Buncombe County that later lay in Henderson County, he was the fourth of twelve children of John, a prosperous farmer, and Mary Grady Woodfin. Nicholas not only became a distinguished member of the Asheville bar and a state senator for five terms, but he also acquired extensive acreage in the French Broad River valley and the largest number of slaves—122—owned by anyone in Buncombe County in 1860. That year he valued his real estate and personal property at $165,000. In 1870, however, the total value of his property was given as only $36,000.

Although the formal education of the Woodfin children was limited to the local school, three of them became professional men. Nicholas's younger brother, John W., also entered the law but was killed during the Civil War; another younger brother, Henry Grady, became a physician. Nicholas continued his education under attorneys Michael Frances and David Lowry Swain and at age twenty-one was admitted to the North Carolina bar. Preferring to remain an advocate, he refused the offer of a judgeship when he was thirty-two.

In 1840 Woodfin married Eliza Grace McDowell, the daughter of Colonel Charles McDowell of Quaker Meadows in Burke County. They had three daughters: Anna, Lillie, and Mira. The Woodfin home on the street that was named for him became part of the YMCA building in Asheville. Attesting also to his prominence is a community near Asheville that bears his name and the presence of his portrait in the Buncombe County Courthouse.

Woodfin's service as state senator from the Buncombe and Henderson District began in 1844 and ended with the 1852 term. He served on the Committee on the Judiciary and was its chairman during his last three terms. Recognizing that turnpikes and railroads were the key to the development of his region, he strongly supported their construction. During Reconstruction he was one of the commissioners appointed to investigate fraud and corruption connected with the Western Division of the Western North Carolina Railroad Company. It was he who was sent to London to make a settlement with Milton S. Littlefield, the president of the company who had fled the country.

Woodfin's activities in support of public education received the highest praise from the first superintendent of common schools, Calvin H. Wiley. Further, he instructed without compensation a number of young men training to become lawyers.

Because the mountains were particularly suited to tobacco production and dairying, Woodfin advocated those means, as well as diversified industries, to increase the prosperity of the region. After the Civil War he started and for a time operated a cheese factory. He was a member of the Buncombe County Agricultural Society and once spoke to the American Agricultural Society at Ithaca, N.Y.

A Whig with strong Unionist sympathies, Woodfin opposed secession until President Abraham Lincoln called for troops to coerce the seceded states. He represented Buncombe County in the secession convention, and after the war began he served without remuneration, so it developed, as the agent of the state to superintend the North Carolina Salt Works that were located at salt mines in southwestern Virginia. At the end of the war he returned to his previously extensive law practice.

During his middle years Woodfin was confirmed in the Episcopal church and served as a vestryman. A handsome man with a pleasant personality, he has been described as a "conspicuous example of eminent citizenship."

Journals of the Senate and House of Commons of the General Assembly of the State of North Carolina (1944–52).

John Gilchrist McCormick, "Personnel of the Convention of 1861," James Sprunt Historical Monographs, no. 1 (1900).