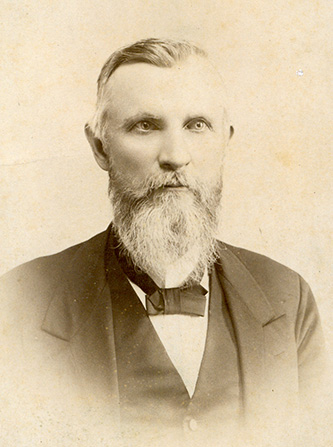 Marquis Lafayette Wood, Methodist clergyman, missionary, and college president, was born near Concord Camp Ground in Randolph County, the tenth of fourteen children of Jones Kendrick and Ruth Loftin Wood. After working on his father's farm until age twenty-one, he entered Union Institute Academy; in 1855 he was graduated from Normal College after the academy officially changed its name. Having grown up in the same section as President Braxton Craven and owing his opportunity for education to the financial assistance of the church, Wood had a special affinity for and lasting devotion to the Methodist institution later named Trinity College and Duke University. He was present at the organizational meeting of the college alumni association in 1858 and thereafter rarely missed a commencement celebration.

Wood was converted during a camp meeting in 1842, received into full fellowship at Salem Church in 1844, and licensed as an exhorter in 1852 and to preach in 1853. After joining the North Carolina Conference of the Methodist Episcopal Church, South, in 1855, he was ordained a deacon in 1857 and an elder in 1859. His lifelong emphasis of church-centered education and the relevancy of scripture was evident in his first appointments on the Wilkes (1856), Franklinsville (1857), and Surry circuits (1858–59). Carefully kept diaries and numerous sermons depict Wood as a disciplined, studious, ardent Methodist ever mindful of the duties and responsibilities of the itinerant preacher and presiding elder. He preached to enslaved people, distributed literature of the Methodist publishing concerns, founded Sabbath schools in every congregation where ten or more children were present, and established a reputation as a learned yet clearly understood and quotable preacher.

At a "China Missionary Meeting" during commencement week at Trinity in 1859, Bishop G. F. Pierce called for a volunteer from the North Carolina Conference to be its first missionary to China, and shortly afterwards Wood answered his appeal. Rapidly setting his affairs in order, he married Ellen E. Morphis (b. 1835), a member of the faculty of Greensboro Female College, on 19 Sept. 1859, traveled to Columbia, Tenn., to be ordained as elder on 16 October, and with his bride sailed for China from New York City on 17 December. Such momentous events could not be postponed for ordination at his own annual conference.

The seven-month voyage on the small sailing vessel, Seaman's Bride, was often grim despite the study of anatomy, geography, and church history and the companionship of another Methodist missionary couple from Georgia, Young J. Allen and his wife. Often going weeks without sighting land or even other vessels and after experiencing all manner of physical discomforts, it is little wonder that Wood sometimes recorded in his diary, "I feel dull physically, mentally, and spiritually today." The relief and excitement of arrival in Shanghai on 13 July 1860 soon gave way to uncertainties of another sort. Assignment of the young couples to Soochow and then Hang-chow was canceled because of the unsettled conditions due to the Tai-ping Rebellion, and then Civil War at home cut off all communication and support from their church. Weekly interdenominational services and social occasions and trips into the surrounding area when conditions permitted counterbalanced the dire circumstances, but eventually the Methodists had to double up in their residences to create rental property as well as seek secular employment for income. Wood, who assiduously studied Chinese and preached his first native-language sermon in December 1861, contributed to the support of the mission as a translator for cotton brokers and as editor of the newspaper North China Herald. He also served on the committee that compiled the Union Hymn Book for use in the native churches of the various missions.

Only a strong faith sustained Wood. At the close of 1864, "the saddest year of all my life," he wrote of the death of his wife in March after a severe illness; the forced separation of his children, Edwin then age three and a half and Charles age fourteen months, who were placed in the care of a missionary family in another city; the news of the death of his favorite and youngest brother, Virgil; the Civil War at home; and the growing financial crisis at the mission. Yet at the same time he recalled his covenant made in Salem Church over a decade earlier where he consecrated himself to God, "becoming willing to trust Him anywhere in the world—even in China." To Wood, God's acceptance of his life and sanctification of his soul made him "perfectly happy in his Savior's love" as he faced another uncertain year.

On 1 Feb. 1866 Wood and Allen received their first communication from the Home Mission Board, which stated that they would be supported financially. Nevertheless, personal affairs dictated Wood's return to the United States. On 5 December he and his children sailed on the Antelope bound for home via the Cape of Good Hope. On 20 Mar. 1867 they arrived in New York City, and by 12 April he visited his aged parents and renewed acquaintances in Randolph County. Rejoining his home conference Wood received appointments to the Mount Airey Station (1867–70), Iredell Circuit (1875–76), Rockingham Station (1888–91), and St. John Station (1893). He also served as presiding elder for the Salisbury (1871–74), Greensboro (1877–79), Charlotte (1880–83), Shelby (1885–87), and Rockingham (1892) districts.

In November 1882 Trinity College faced a crisis on the death of Braxton Craven, its leader for over four decades, and in June 1883 the board of trustees asked Wood, a member of that body for ten years and perhaps Craven's closest friend in the conference, to be president. He accepted in an emotional speech, but soon, after a careful analysis of the condition of the college, he was cautioning that "all great enterprises require time and patience and labor and suffering and money." Despite diligent work and innovative attention to college-church relations, including holding district rallies where the first money ever was raised for endowment, Wood's greatest burden and disappointment was that the Methodists simply did not adequately support the college. When the annual conference meeting in December 1884 accepted the proposal of three wealthy laymen, John W. Alspaugh, James A. Gray, and Julian S. Carr, to serve as a Committee of Management to oversee the affairs of the college, Wood tendered his resignation.

Despite an "impossible task" and unpleasant intrigue for his position by a faculty member, Wood professed "abiding interest" in Trinity. Remaining on the board of trustees, he submitted the controversial and momentous resolution in 1889 calling for the removal of the college to Raleigh, a resolution that culminated in the relocation of the institution in Durham and the identity of the school with the philanthropy of the Duke family.

Interested in church history, Wood carefully prepared a conference lecture on "Methodism: Its Rise, and Introduction into America; and into the Yadkin Valley, North Carolina." An active preacher he died in the parsonage at Gibson Station and was buried at Eastside Cemetery, Rockingham. In 1884 The University of North Carolina and Rutherford College awarded him D.D. degrees. He was a Royal Arch Mason.

Wylie, Alexander. Memorials of Protestant Missionaries to the Chinese: Giving a List of Their Publications, and Obituary Notices of the Deceased. With Copious Indexes. Shangae (Shanghai): American Presbyterian Mission Press. 1867. 260. http://books.google.com/books?id=jRQQAAAAIAAJ&pg=PA260#v=onepage&q&f=false (accessed November 21, 2013)