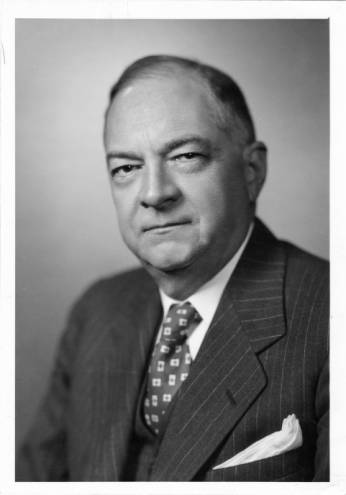 James Alexander Gray, business executive, civic leader, and philanthropist, was born in Salem, the son of James Alexander and Aurelia Bowman Gray. The youngest of four children who grew to maturity, he had a brother, Bowman, and two sisters, Mamie G. Galloway and Bess G. Plumly. Bowman (1874–1935) was president and later chairman of the board of the R. J. Reynolds Tobacco Company; in 1932 he built the home in Winston-Salem known as Graylyn, and the Bowman Gray School of Medicine was named for him. His sons, Bowman, Jr., and Gordon, later distinguished themselves in the business and civic affairs of the state and nation.

James Gray attended West End public school in Winston and in 1908 was graduated from The University of North Carolina, where he was football manager and known by his classmates as "Manager Gray." He returned to the university for the 1908 fall season as graduate football manager. Afterwards he began his business career as a clerk at the Wachovia National Bank. In 1911, he became assistant treasurer of its successor organization, the Wachovia Bank and Trust Company. He was made treasurer in 1915 and elected vice-president and a director in 1918; he served continuously as a director until his death. During this period Gray was president of the North Carolina Bankers Association (1918–19) and a member of the executive council of the American Bankers Association (1920–21).

As a young man Gray assumed positions of leadership in the community and state, serving on the board of directors of the YMCA, as a member of the City Hospital Commission (1914), and as chairman of the Forsyth County Highway Board (1915–16). From 1917 to 1920 he served in the North Carolina Senate for two terms. As chairman of its finance committee during both terms, he introduced the bill creating the Advisory Budget Commission and was cointroducer of the bill amending the state constitution to provide for a state income tax.

On 1 Jan. 1920 Gray joined the R.J. Reynolds Tobacco Company as a vice-president and a director. In 1934, he was elected president and served in that position for twelve years, longer than any other person except R. J. Reynolds himself. From 1946 to 1949 he was chairman of the executive committee, and from 1949 until his death he was chairman of the board of directors.

In August 1939 Gray, his brother's widow, Nathalie, and his nephews, Bowman, Jr., and Gordon, offered the $600,000 discretionary charitable bequest of his late brother to Wake Forest College for the establishment of a four-year medical school in Winston-Salem. The Bowman Gray School of Medicine opened in the fall of 1941. Partly as a result of this action, a decision was made in 1946 to move the remainder of Wake Forest College to Winston-Salem, which was accomplished in the fall of 1956.

Influenced by the fact that his brother had not lived to see the fruits of his benevolence, James Gray felt strongly that he should undertake charitable giving during his lifetime. Thus, on 1 Jan. 1947, he established an endowment fund then worth approximately $1,700,000 for the benefit of eleven North Carolina colleges and universities as follows: Wake Forest College (Bowman Gray School of Medicine), $900,000; The University of North Carolina at Chapel Hill (Chair of Bible), $250,000; Salem Academy and College, $150,000; Winston-Salem Teachers College (Chair of Bible), $100,000; Greensboro College, High Point College, Brevard College, and Louisburg College, $50,000 each; and Davidson College and Saint Mary's Junior College, $25,000 each. Included among other gifts made during his lifetime were a dormitory at the Methodist Children's Home, a gymnasium at Salem Academy and College, a building at the Salem Home for elderly women, a dormitory at the Memorial Industrial School, the land for the YWCA building, parks and playgrounds in black neighborhoods (all in Winston-Salem), an infirmary at Greensboro College, and a children's hospital in Alleghany County. He was also a generous contributor to many Methodist causes and churches, including the church in Chapel Hill that he attended as a student.

Despite his many accomplishments, Gray was a modest, unassuming man. At his death, he was still living in the house at 138 North Cherry Street where he was born. A lifelong member of Centenary Methodist Church, he rarely missed a Sunday service and served on the board of stewards for over thirty years. The following preamble to his will is noteworthy: "I desire to . . . give thanks for the goodness of God who has blessed me far beyond my merit; for the constant devotion of my wife; the steadfast loyalty of my family; the rich fellowship of my friends; . . . the strength for daily toil; the joy of living; the beauty of the world; the inexpressible reward of striving, even in a most imperfect way, to follow Christ; and the glorious certainty of life eternal and abundant—these comprise my real possessions."

Gray died from a heart attack in Winston-Salem at age sixty-three and was buried in Salem Cemetery. Inscribed on his headstone are these concluding words from the funeral sermon preached by Dr. Mark Depp: "God's church he loved; God's truth he cherished; God's will he sought; God's servant he was; with God he is."

James A. Gray family records (in possession of Thomas A. Gray, Winston-Salem).