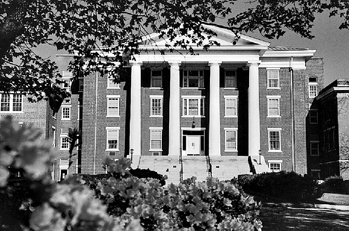 Louisburg College in Louisburg is recognized as the oldest chartered two-year, church-related coeducational college in the United States. The institution evolved from three earlier institutions. The Franklin Male Academy, which opened to students in 1805, was located on the east side of the Louisburg town commons, now part of the east side of the present college campus. In 1814 Louisburg Female Academy was chartered and was located on the west side of the town commons. By the 1850s, the school was a highly respected female seminary under the direction of Asher H. Ray and his wife, Jane Curtis Ray. The success and reputation of the Rays' seminary resulted in a movement to establish a female college in Louisburg. In January 1855, the state legislature authorized the transfer of property by the trustees of Louisburg Female Academy to the directors of Louisburg Female College Company. A four-story, 50-room brick Greek Revival building was constructed in 1857 to serve as the student dormitory, faculty living quarters, classrooms, library, dining hall, and administrative offices. Located on the west side of the current campus, "Old Main" is still in use as the administrative building of Louisburg College.

During the 1870s and 1880s, the college opened and closed a number of times. A period of relative stability and growth was experienced during the presidencies of Matthew S. Davis (1896-1906) and his daughter Mary Davis Allen (1906-17). At the beginning of the twentieth century, the institution became known as Louisburg College and became officially linked to the Methodist Church. Although Louisburg College offered a four-year course and awarded A.B. degrees, after affiliation with the Methodist Church the college was reorganized into an institution with a junior college rating (1914-15).

Louisburg College became coeducational in 1931, and in 1952 it received accreditation from the Southern Association of Colleges and Secondary Schools. In 1956, when the North Carolina Conference of the Methodist Church decided to authorize establishment of two new senior colleges, an active campaign by college alumni and Franklin County citizens influenced the decision of the conference to maintain Louisburg College as an accredited junior college. Louisburg College has the distinction of being the only institution in North Carolina still functioning as a private two-year college. It has extensive transfer agreements with many public and private universities, including the 16-campus University of North Carolina System, allowing qualified students to enter the four-year institutions as juniors.