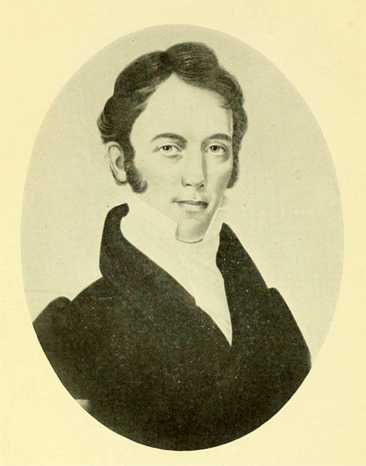 Louis Dicken Wilson, merchant, military officer, and public servant, was born on the family plantation south of Tar River in Edgecombe County, the son of William and Elizabeth Dicken Wilson. After receiving a modest education at the local academy, he went to the town of Washington in 1807 and worked in a countinghouse while apparently reading law. A few years later he returned to Tarboro and qualified as a notary public on 28 May 1812 and as a justice on 24 Feb. 1817.

In addition to representing Edgecombe County in the General Assembly (1814–19), Wilson collected the Tarboro taxes (1819–29) and served as a state senator (1820, 1824–32). On 30 Sept. 1827 he attended the Free Trade Convention at Philadelphia, and on 19 December he was elected brigadier general of the Fifth North Carolina Brigade, a rank that he appears to have held as late as 1846. He was one of the two delegates from Edgecombe County to the constitutional convention of 4 June-11 July 1835; later that year he was a delegate to the Democratic National Convention.

In 1829 Wilson first gave his support to the infant public school movement, even advocating the education of free blacks. On 4 Jan. 1831 he and Elder Joshua Lawrence were among the incorporators of the Hickory Grove Academy, and on 30 September he bought as his permanent home the handsome former residence of Congressman Thomas Blount, erected in 1810. In 1838 he was elected a member of the board of trustees of The University of North Carolina, and in 1844 the state senate placed him on the committee on education and the Literary Fund.

Returning to the senate in 1838, he represented Edgecombe County continuously until requesting a fateful leave of absence on 12 Dec. 1846 in order to support the patriotic honor of North Carolina by personally participating in the War with Mexico. He had served as speaker at the 1842–43 session. Wilson left Raleigh for the last time on 1 Jan. 1847 and returned to his native county, where on 5 January he was elected captain of Company A, First Edgecombe Volunteer Regiment, the first company to offer its services to Governor William A. Graham. The volunteers met the next day at Toisnot Depot (now the city of Wilson) "to partake of a barbecue dinner and arrange plans prior to their departure."

Captain Wilson's company arrived at Fort Johnston near Wilmington on 8 January for mustering into the U.S. Army and brief preparation before embarking from Smithville for Mexico in the schooner E. S. Powell on 22 February. Meanwhile he and several other officers had returned to Tarboro to attend a splendid dinner at Pender's Hotel on 9 January and the huge celebration on 18 January at which a beautiful silken banner provided by several patriotic ladies was received with an appropriate speech by Captain Wilson. It was not until 6 Mar. 1847 that the Edgecombe County companies A and E arrived at Brazos, from which they proceeded the next day to San Francisco on the Río Grande.

On 3 Mar. 1847 President James K. Polk offered Wilson the post of colonel of the Twelfth Regiment of U.S. Infantry, which Wilson accepted at Washington City on 9 April. It was expected that he and the 850 troops under his command would leave Vera Cruz and proceed towards Mexico City on 7 August as the guard with a train of supplies for General Winfield Scott's army, but Wilson was stricken six days earlier with the dreaded yellow fever and died. The military funeral and burial were held the next day, but his leaden casket was shipped subsequently to Edgecombe County and an appropriate oration was pronounced on 22 May 1850, on the occasion of the laying of the cornerstone of the monument erected to his memory. On 1 Nov. 1904 the casket from the neglected rural graveyard and the monument from the old Court House lawn were placed on the Tarboro Town Common.

Although Wilson never married and left no known descendants, he merits the remembrance and appreciation of posterity, not only because of his numerous public services but also because of his then-immense bequest of $40,000 to Edgecombe County for the future benefit of the public poor. About $12,000 was properly utilized, $10,000 lost by unsound investments, and $18,000 enjoyed by Reconstruction-period officials. It is more gratifying to remember that the town of Wilson was incorporated and named in his memory on 29 Jan. 1849, followed by Wilson County on 13 Feb. 1855. An oil portrait is owned by Mrs. Becky White Johnston, Charlottesville, Va.