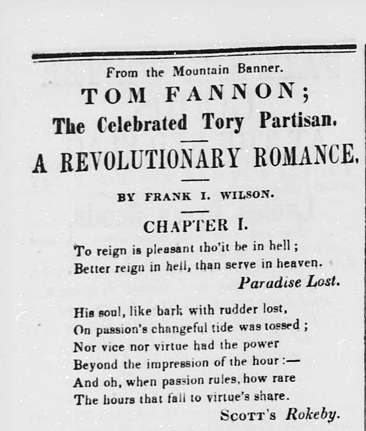 Franklin Inge (Frank.) Wilson, teacher, newspaperman, and writer, was a native of North Carolina, but nothing convincing has been found about his origin except that one secondary account says he was born in Caswell County. His writing suggests a classical education and a knowledge of English literature. An attorney, he was in 1848–49 also principal of the Rutherfordton Male Academy as well as county solicitor.

In 1848 he also became coeditor of the Mountain Banner, a newspaper in Rutherfordton. In October 1850, in partnership with David S. Reid, he acquired the paper from Thomas A. Hayden but continued as coeditor until 1851, when Reid became governor and Wilson became the sole owner. In May 1851 he wrote to Governor Reid that he was editing the Banner and "doing a fair business," having increased its circulation from 300 to 540 copies; his purpose was "to induce the Whigs to read" his Democratic paper. Near the end of the year Wilson thanked the governor for assistance in getting him established with the newspaper.

Wilson was the author of an eight-chapter original novella, published first in his Rutherfordton paper, of which no copy appears to have survived, but which was reprinted in the Carolina Watchman in Salisbury on 11, 18, 25 Mar. and 1, 8 Apr. 1852. "Tom Fannon; The Celebrated Tory Partisan. A Revolutionary Romance," set around and in Salisbury, is based on an imaginary episode in the life of David Fanning, notorious Tory renegade in North Carolina in the 1780s. In 1861 a limited edition of David Fanning's own narrative of his activities was published, and it reveals that Wilson's account was remarkably accurate. Wilson obviously drew on what came to be regarded as "oral history," and some of the countryside was so flawlessly described that it could be easily recognized in the twentieth century. The novella is an engaging story of romantic love and rivalry with a touch of murder, suspense, and horsemanship. The characterization is good, and it is remarkably well written.

In Salisbury the issue of the Carolina Watchman for 24 Mar. 1853 advertised Wilson's Mountain Banner for sale. On 31 March he proposed publishing the Republican Banner to be issued in Salisbury as a Democratic organ.

Wilson sold the Banner to John C. Cannon, and after retiring to Marion in the mountains for a while he settled in Raleigh. At first he appears merely to have been in the employ of William Woods Holden, editor and publisher of the North Carolina Standard. From 1854 to 1859, however, Wilson was associate editor. Among his contributions were reports on the action of the lower house of the General Assembly while Holden covered the senate. The convenience of travel by train pleased Wilson in 1856, when he reported that he had gone from Raleigh to Salisbury in eleven and a half hours whereas previously the trip had required three and a half days over muddy roads. In the same year Wilson presided over the meeting of men when the Wake County Democratic Club was organized.

In 1859 he went to Charleston, Va. (now in West Virginia), to cover the execution of John Brown and John A. Copeland, a free black from Raleigh, who had been involved in the raid on Harpers Ferry. This apparently was the first time that a North Carolina newspaper had sent a representative out of the state to prepare a special report for a nonpolitical story. Returning home to Raleigh from a trip to Asheville, Wilson wrote in the Standard of 7 Sept. 1859 that the purpose of his trip had been "to soften the asperities of sectional feelings, and to convince the Eastern people that the people of the West are neither savages nor ignoramuses; but on the contrary, that they are intelligent, high-minded, hospitable, and civilized."

From a Raleigh address on 26 Nov. 1860 Wilson issued a prospectus for the Ad Valorem Banner, a weekly newspaper that he proposed to establish in early January 1861. To be published in quarto size, his paper would devote about half of its space to poetry, tales, essays, biographies, and other departments for which he would call upon "some of the best writers of the age." The remainder of the organ would deal with politics, news, and other features suitable for "a good Family paper." The "political principles of truth, justice and equality" would prevail, he promised.

The prospectus described Wilson as "a Democrat—one of the Old Guard—and under present circumstances a Union man." He had fought for equal suffrage, which brought the Democractic party to power in the state, and he intended to support "another great popular right—Equal Taxation." Nor was he blind to national concerns. "If Mr. Lincoln or any one else violates the Constitution," he proclaimed, "I shall advocate his removal from power and the infliction of a punishment commensurate with his crime; but I am not in favor of rashly overthrowing the fairest governmental fabric in the world, and of blotting out the last great hope of freedom, on account of the villainy of any man or set of men."

Perhaps as further assurance of his intention to produce a lively paper, he noted: "As occasion requires I shall use a set of editorial casters, well supplied with the vinegar of sarcasm, the mustard of irony, the pepper of ridicule, the horse-radish of invective, and other seasonings to suit times and circumstances."

It has not been possible to determine how deeply involved Wilson was in labor activities, but he presided at a meeting of the Wake County Workingmen's Association in October 1859. At the courthouse in Raleigh on 6 Feb. 1860 he attended another meeting of the association and delivered an address that was published as a 22-page pamphlet. These are presumed to be the first labor meetings in the state.

On the eve of the Civil War Wilson frequently wrote in his newspaper that he was a Union man, but at the same time he anticipated trouble if presidential candidate Abraham Lincoln persisted in ignoring what were regarded as Southern rights. During the course of the war his writings demonstrated no overt disloyalty to the Confederacy, yet something about him aroused suspicions—perhaps his association with W. W. Holden, who had begun to advocate an end to the war. He was at least suspected of smuggling copies of Holden's newspaper as "peace propaganda" across the state line into Virginia. This suspicion, however, ought to have been canceled by the publication in September 1864 of a 28-page pamphlet, The Battle of Great Bethel, (Fought June 10, 1861), in which he commended North Carolina Troops in glowing terms for their critical role in winning this significant early encounter with the enemy.

In October 1864 Wilson published a 76-page paperback booklet, Sketches of Nassau to which is added the Devil's Ball-Alley; An Indian Tradition. Dedicated to Captain J. Julius Guthrie, Confederate States Navy, the first part of the book is an account of contemporary events in Nassau, in the Bahama Islands, frequently visited by North Carolina blockade-runners engaged in trade. Wilson sailed to Nassau (perhaps for his health, as he mentioned that he was a semi-invalid) aboard a blockade-runner. There he gathered information for this splendid journalistic report on the island, its people, religion, and government. Again he clearly demonstrated Southern ambition for independence.

The final portion of this publication is the author's version of an ancient Indian story. Set in the mountains where he lived briefly in 1854, it is a tale of rivalry between the Cherokee and the Catawba Indians with vivid descriptions of people and places. Told with sympathy and suspense, it may have originated in Wilson's contact with remnants of the Catawba nation in the vicinity of Rutherfordton and Salisbury where he had lived. This is a further example of his use of oral history.

The 1860 census for Wake County described Wilson as a 37-year-old printer and publisher; his wife, Jane, a native of Connecticut, was 34. She had taught in the Rutherfordton Female Academy when they lived in that town. Their children were Jefferson, 15, Ina, 12, David, 8, and Evai, 4. Living in his household were North Carolina–born J. N. Henson, 27, a printer, and Wilson Bliss, 27, a broom maker who was a native of Massachusetts. Wilson reported real estate valued at $2,500 and personal property at $1,000—respectable wealth for the time.

He died in Raleigh at age forty-three, the North Carolina Standard reported on 17 June 1865, "after a lingering illness." In the spring of 1859, when he delivered the commencement address at the Horner School in Oxford, he intimated that he had suffered at the hands of an unskilled doctor. No will has been found.

He was described by his contemporaries as "a ripe scholar and fine writer," and this judgment can be confirmed from his surviving writings. He made appropriate references to classical scholars and cited such writers as Shakespeare, Milton, and Byron, as well as Sir Walter Scott and other contemporary authors. He was commended as "an honest, direct, straightforward man. There was no guile or deceit in his character."