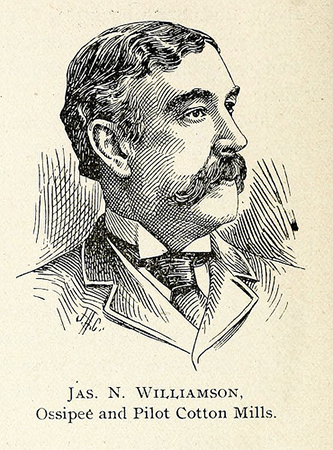 James Nathaniel Williamson, cotton manufacturer, was born at Poplar Grove, the family plantation in Caswell County, the youngest child of Thomas and Frances Pannill Banks Farish Williamson. Thomas Williamson was a wealthy planter and merchant who died when James was only six years old. In his will he left the management of his considerable property in his wife's capable hands. She was a descendant of prominent Virginia families; her maternal uncle, Linn Banks, was a member of the Virginia legislature for twenty-four years, eighteen of them as speaker of the house, and a member of Congress from 1838 until his death in 1842. This interest in public office did not descend to Bank's great-nephews James Nathaniel and his older brother, tobacco manufacturer Thomas Farish Williamson. In his will their father, Thomas Williamson, stressed the importance of a thorough education for all of his children, and his wife carried out his wishes. James attended the preparatory school of Dr. Alexander Wilson in Alamance County, where he was a good scholar, and from there entered Davidson College in 1860.

On 13 May 1861, two months after his nineteenth birthday, Williamson left college to enlist as a private in the Confederate forces in the first company raised in Caswell County, Colonel (later Major General) W. D. Pender's Third Regiment, North Carolina Volunteers. He was wounded at Chancellorsville, Gettysburg, and the Wilderness but always recovered in time to join his company in the next major battle. Promoted to captain of Company F, Thirty-eighth North Carolina Regiment, Williamson took part in the battle at Petersburg and was with his men at Appomattox when the war ended.

He returned to Caswell County to farm the plantation left him by his father and to assume his share of helping his mother run her plantation. Those were hard times indeed for a young man, family fortune gone, trying to restore formerly productive land that had perforce run down during the past four years. His father-in-law, pioneer cotton manufacturer Edwin M. Holt, strongly believed that his family should live and work together as a unit. In 1867 Williamson heeded Holt's wishes and moved to the Holt homeplace in Alamance County. He was made a partner in the firm of E. M. Holt's Sons, which ran the Alamance Cotton Mills, the first (1853) to weave dyed cotton yarn and colored plaid material in the South. Captain Jim, as he was now called, continued to oversee his plantation in Caswell County. 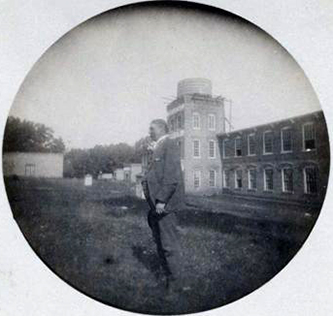 A lifelong Democrat, Captain Jim supported the party but refused any nomination to political office. He was reared in the Presbyterian faith and active in the church wherever he lived. Known for his generosity and kindly manner, he was a favorite with young people.