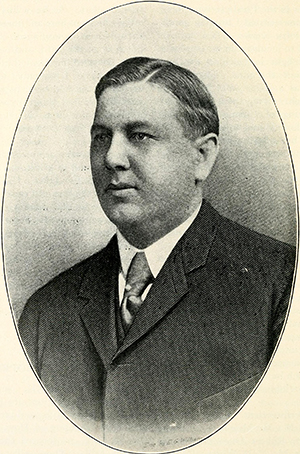 In 1894 he left the university and went to work at his father's Ossipee Cotton Mills in Alamance County. The elder Williamson had joined his father-in-law, E. M. Holt, in the cotton mill business in 1867 and later branched out for himself, building and running the Ossipee Mills and then the Pilot Cotton Mills in Raleigh with his older son, William Holt Williamson. With his grandfather, father, many Holt uncles and cousins, and his own older brother all engaged in the cotton mill business, young James N. naturally chose that field for his own vocation. He rapidly rose to the positions of secretary and treasurer and general manager of the Ossipee Mills. He added the offices of vice-president of Pilot Mills and president of the Hopedale Mills at Burlington. Williamson was not interested in holding political office but chose to serve the public by working as a member of North Carolina's Good Roads Commission. He also sat on the board of the American Trust Company of Charlotte (afterwards the North Carolina National Bank and later NationsBank).

On 9 Nov. 1898 Williamson married Mary Archer Saunders of Richmond, Va. Their children were James Saunders (m. first Ann Stuart Holcombe and after her death, Elizabeth S. Wilkinson), Mary Archer (m. first John Day Seely and after his death, Parker W. Morris), and Edwin Holt (m. Margaret Matilda Nelson). Williamson was reared in the Presbyterian faith, but after his marriage he joined his wife as a member of the Episcopal church, serving on the vestry of the church in Burlington. Around 1930 he and his family began to spend their winters at their home in De Land, Fla., and the rest of the year at their home in Biltmore. He died in Biltmore and was buried in the cemetery at Burlington.