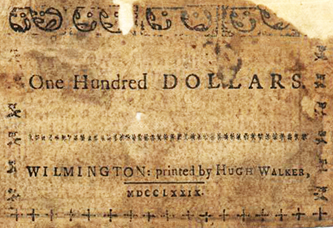 Hugh Walker, Revolutionary soldier and printer of state currency, is an elusive subject, but he went to Wilmington apparently from Virginia before the American Revolution. Printer Adam Boyd acquired Andrew Steuart's press there when it closed in 1767, and Boyd continued it until 1775. Walker possibly succeeded Boyd, as he was identified as the printer in Wilmington of North Carolina's 1779 issue of bills of credit.

There are no surviving Wilmington newspapers between 1775 and 1788, when one Bowen and Caleb Howard began publishing the Wilmington Centinel. Hugh Walker, however, enlisted in the North Carolina militia in the Wilmington District and served in Virginia. He also was among the taxables listed in New Hanover County in April 1780. The name does not appear in the census of North Carolina for 1790, but he may have returned to Virginia, for the census for Middlesex County in that state lists one of this name in a household of ten whites and twenty-six blacks. Walker was married first to Mary Thurston and afterwards to Mrs. Catherine (Montague) Morgan.

Roster of Soldiers from North Carolina in the American Revolution (1932).