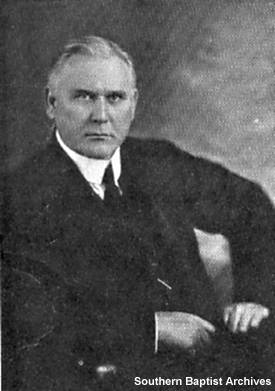 George Washington Truett, clergyman, was born on a farm near Hayesville, Clay County, the seventh child of Charles Levi and Mary Rebecca Kimsey Truett. His father, a native of Buncombe County, was of English and Scots-Irish ancestry; his mother, of Scots-Irish descent, was the daughter of James Kimsey and the niece of Elijah Kimsey, both well-known Baptist preachers in the North Carolina mountains. Charles Levi Truett's family lived in Cherokee County at the time the older children were born but later moved to Clay to take advantage of the better educational opportunities available there. Although his circumstances ranged between poverty and simple comfort, he always supplied his family with books and periodicals suitable for a religiously oriented household.

From 1875 to 1885 George Washington Truett attended Hicksville Academy (later called Hayesville Academy), operated by John O. Hicks, a highly regarded schoolmaster. By the time Truett was eighteen, he had completed all of the courses offered by the academy and wanted to go to college to study law. Needing money, he began teaching in a one-room public school on Crooked Creek in Towns County, Ga., just over the state line from his North Carolina home. In 1887 he founded and became principal of Hiawassee Academy in Towns County. The next year an impromptu speech before the Georgia Baptist Convention about his school brought him to public attention. He so stirred his hearers that they determined to support the school, and one even offered to pay his expenses if he would attend Mercer University. Many have believed that the clear diction and sharp pronunciation that characterized Truett's speaking then and afterwards may be attributed in part to the fact that at home he practiced pronouncing every word distinctly, forcing his lips to do their part, for the benefit of his deaf brother, who depended on lip reading.

In the summer of 1889 Truett followed his parents to Whitewright, Grayson County, Tex., where they had migrated early that year. That fall he entered Grayson Junior College in Whitewright, and the next year he was ordained to the ministry by the Whitewright Baptist Church. From 1890 to 1893 he was financial secretary of Baylor University, traveling for twenty-three months and raising $92,000 to free the university of debt. For the next four years he was a student at Baylor, receiving the A.B. degree in 1897. Baylor awarded him the D.D. degree only two years later and a few years after that elected him to the presidency, which he declined. The LL.D. degree was conferred by Alabama, Baylor, and Southern Methodist.

While a student at Baylor, Truett was pastor of East Waco Baptist Church. In 1897 he became pastor of First Baptist Church, Dallas, Tex., a position he held until his death forty-seven years later. During his pastorate membership increased from 715 to 7,804; a total of 19,531 new members were received, and total contributions exceeded $6 million.

It was in the period of World War I that Truett reached his peak as preacher, pastor, and world-renowned leader. From the first an outspoken supporter of the war effort as a struggle of democracy against autocracy, he held noonday religious services in the Palace Theater in downtown Dallas for the convenience of people at work. By appointment of President Woodrow Wilson he spent six months in Europe in 1918 preaching a message of "patriotism and religion" to the Allied armies and navies. On 16 May 1920 he delivered from the steps of the capitol in Washington a memorable address on religious liberty. In 1921 he began broadcasting services by radio, one of the first in the nation to do so.

From 1927 to 1930 Truett was president of the Southern Baptist Convention. During the Great Depression it was he who led the convention to determine to repay one hundred cents on the dollar on the debts of its agencies. In the summer of 1930 he went on a preaching tour in South America, and in 1934 he was the sole American speaker on the program of the Spurgeon Centenary in England. The successes achieved on these two occasions assured his election as president of the Baptist World Alliance at Berlin in 1934. From then until the end of his term in 1939, he preached and conferred all over the world.

Truett was a trustee of Baylor University; of South-western Baptist Theological Seminary, Fort Worth; and of Baylor Hospital, Dallas. For one week each summer for thirty-seven years he preached at the Cowboy Camp Meetings held in the Davis Mountain country of western Texas. He returned frequently to North Carolina, especially to Ridgecrest, and once told a Raleigh audience: "Every thought of North Carolina, my native land, warms my heart to the depths. The spirit of the people is the great thing about them." The Charlotte Observer called him "America's greatest preacher," and Josephus Daniels said in 1936 that Truett was "the greatest living North Carolinian." In 1937 the Baptist State Convention of North Carolina acquired the Truett home near Hayesville by deed in order to preserve it as a memorial. Dozens of religious, educational, and healing institutional buildings over the South and abroad bear his name.

Although Truett wrote little intended for publication, others have compiled and edited ten volumes of his sermons, two volumes of his addresses, and two volumes of his annual Christmas messages, which were originally personal letters to friends. His authorized biography (Powhatan W. James, George W. Truett—A Biography ) has appeared in six issues, five by the Macmillan Company, New York (1939–45), and the sixth by the Broadman Press, Nashville (1953).

However sophisticated his audience, Truett's basic orientation and figures of speech remained rural. The effect of his haunting voice, clear as a bell and under complete control, was enhanced by his striking appearance. Soon after moving to Dallas he went quail hunting with two friends, one of whom was fatally wounded by the accidental discharge of Truett's gun. Because he never used humor in the pulpit and maintained an air of quiet dignity that bordered on detachment, the legend arose that he never smiled after the accident. The truth is that by age twenty-three, years before the tragedy, "he already had the serious and solemn dignity that always marked his platform presence." In informal circles he had a "most infectious and frequent smile" and a keen sense of humor. Surprisingly, he never learned to drive an automobile, and his only hobby was collecting books.

On 28 June 1894 Truett married Josephine Jenkins, the daughter of Judge W. H. Jenkins, a resident of Waco and chairman of the Baylor trustees. The Truetts had three daughters: Jessie (Mrs. Powhatan W. James), Mary (Mrs. Thomas W. Gilliam), and Annie Sallee (Mrs. Robert L. Milliken). Truett was buried in the Grove Hill Cemetery, but some months later his body was moved to the more spacious Hillcrest Memorial Cemetery, both in Dallas.

I am trying to figure out how

I am trying to figure out how he is connected to our family. My grandfather s name is the same and they are from the same place. My family told me we are related

He was concerned that these

He was concerned that these men spent a great deal of their lives isolated from society and the availability of the church. Every year for thirty seven years, he took several weeks from his pulpit to travel with the cattle drives in the davis mountains of west texas.

Very nice article about my

Very nice article about my relative. Thank you