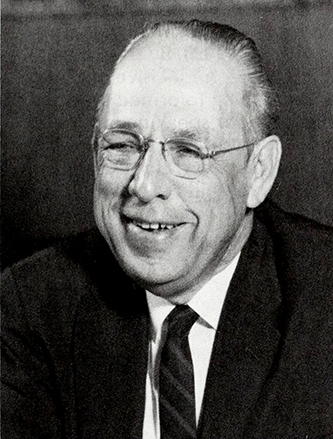 Harold Wayland Tribble, theologian and educator, was born in Charlottesville, Va., the third son and sixth child of Henry Wise and Estelle Carlton Rawlings Tribble. At the time of his birth, his father, a Baptist minister, was president of Rawlings Institute, a college at Charlottesville for women. In 1909 the family moved to Lake City, Fla., where Henry Wise Tribble became president of Columbia College (later absorbed by Stetson University). Young Harold received his early education in the primary and secondary schools operated by Rawlings Institute and Columbia College. After two years at Columbia College (1915–17) at the collegiate level, he entered Richmond College (later the University of Richmond), where he was awarded the A.B. degree in 1919. At Richmond he played varsity basketball and during his senior year was editor-in-chief of the weekly student newspaper, the Collegian. He also served in the Student Army Training Corps at Richmond and at Plattsburg, N.Y.

Meanwhile, Tribble had been appointed assistant professor of theology (1925) and then a full professor (1929) at Southern Baptist Theological Seminary. During the twenties and thirties he served as pastor of Baptist churches in Cropper, Christiansburg, New Castle, and Simpsonville, Ky. Throughout his career he was widely in demand on college campuses as a preacher for special occasions such as religious emphasis weeks and commencements. While teaching at the seminary he wrote three books—Our Doctrines (1929), From Adam to Moses (1934), and Salvation (1940)—and revised E. Y. Mullins's The Baptist Faith (1935). He was also the author of many articles published in theological journals.

Moving from teaching to educational administration, Tribble became president of Andover Newton Theological School, Newton Center, Mass., in 1947. A year before he accepted this position, an event had occurred in North Carolina that would later take him there for the culmination of his career as an educational administrator. In 1946 the Z. Smith Reynolds Foundation of Winston-Salem offered to give Wake Forest College $350,000 a year in perpetuity on condition that the college be moved from its location in Wake County to Winston-Salem and that an adequate plant be built to care for at least two thousand students. Wake Forest and the Baptist State Convention of North Carolina, its sponsoring body, accepted the offer, and a campaign to raise the needed funds was launched.

On 29 Apr. 1949, after several heart attacks, Thurman Delna Kitchin, president of Wake Forest College, resigned so a younger, more active leader could be sought. Already well known to the trustees, Tribble on 4 May 1950 was elected to succeed Kitchin with the clear understanding that he would vigorously pursue the campaign to move the institution to Winston-Salem. The Winston-Salem Journal welcomed the "eminent minister-educator-administrator" to North Carolina, declaring that "His presence and personality stimulated new confidence in the removal project." The Raleigh News and Observer noted after the opening of the fall semester the "mutual admiration atmosphere" between the students and faculty and their new president.

In his inaugural address Tribble declared that the development of the college into a university was "inescapably implicit in the removal and enlargement program." He foresaw Wake Forest as "including all the areas of learning that are essential in culture at its best, and some schools or departments devoted to scholarly specialization, and a graduate school of first rank." The Biblical Recorder quoted President Gordon Gray of The University of North Carolina as saying: "This is a case of a fortunate meeting of the college and the man. . . . Harold Tribble has, in abundance, integrity, vision, passion, and a sound concept of the role of education in this changing world."

The task of fund-raising went so well that groundbreaking exercises, with President Harry S Truman as the principal speaker, were held on 15 Oct. 1951. But Tribble's administration was not destined always to be peaceful and harmonious. Some alumni still opposed the move, and as the prospect grew nearer they refused to accept it. Many believed, albeit without foundation, that Tribble opposed the athletic program and intended to deemphasize it. Moreover, certain segments of the Baptist State Convention felt that the college was not following Baptist traditions. Tribble's aggressiveness and sometimes abrasive personality offended some of those with whom he worked, including several members of the board of trustees. On 16 Nov. 1955 the president of the board appointed a nine-man committee to study the "serious matters involving the College and its administration." After seven more months of bitter controversy both within and outside the board, the trustees defeated—20–13—a resolution to discharge Tribble as president.

Despite the turmoil, fund-raising and building continued, enabling the school to open on the new $19.5 million campus on 18 June 1956. But this did not end the president's troubles. The trustees, responding to student pressure and Tribble's recommendation, voted to allow dancing on the new campus, only to have the Baptist State Convention force them to rescind the action. Tribble's later proposal to modify the requirements for membership on the board of trustees, all of whom had to be North Carolina Baptists, by allowing up to sixteen of the thirty-six to be non-Baptists and non–North Carolinians failed by a narrow margin to gain the convention's approval. Although defeated at the meeting, Tribble received, as reported in Old Gold and Black, a "tumultuous reception from the student body . . . on his return from the Baptist State Convention in Wilmington." He thanked the assembled students, expressing confidence that the proposal to liberalize relations with the convention "would win in the future" because "what we are doing is for a better Wake Forest College and that is our destiny."

During Tribble's administration the total assets of the institution grew from $10,454,000 to $91,267,900 and the annual budget from $1,573,444 to $13,587,000. The library budget rose from $40,700 to $532,000. The student body, despite higher requirements for admission, grew from 1,750 to more than 3,000, and the proportionate increase in the faculty was larger. In 1950 only 43 percent of the faculty held a doctoral degree, whereas in 1967 the figure was 72 percent. Under his leadership, the student body had been racially integrated and the curriculum expanded to include, among many new features, graduate study in the arts and sciences. In January 1967 the trustees recognized the development that had occurred by changing the name of the institution to Wake Forest University. That June Tribble retired after the stormiest yet most productive period in the school's history.

He received the honorary degrees of D.D., Stetson University (1930), and LL.D., Union University (1939), Wake Forest College (1948), University of Richmond (1949), Duke University (1952), and The University of North Carolina (1952). On 10 June 1925 he married Nelle Louise Futch (1898–1984), of Lake City, Fla., a 1925 graduate of the Women's Missionary Union Training School, Louisville, Ky. They had three children: Harold Wayland, Jr., of Long Island, N.Y., a clergyman; Betty May (Mrs. Richard C. Barnett), of Winston-Salem, an educator; and Barbara Ann (Mrs. Harvey R. Holding), of Atlanta, Ga., an artist. A Rotarian and a Mason, Tribble was also a member of Phi Beta Kappa, Omicron Delta Kappa, Kappa Sigma, Tau Kappa Alpha, Wake Forest Baptist Church, and the Old Town Club. Golf was his hobby. His official Wake Forest portrait, which was hung in the classroom building named for him, was painted by Belgian artist Alfred Jonniaux. After retiring he lived in Blowing Rock, Port St. Lucie, Fla., and the Moravian Home in Winston-Salem. A memorial service was held at Wake Forest University on 15 June 1986.