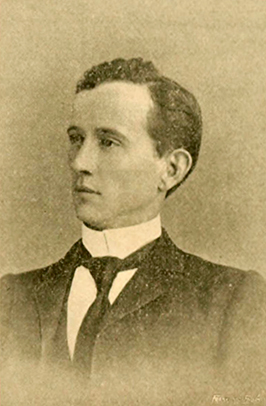 Clinton White Toms, teacher, school superintendent, businessman, and philanthropist, was born in Hertford, Perquimans County, the son of Zachariah and Susan Baker Toms. In 1889 he was graduated from The University of North Carolina and in the fall began teaching at the Plymouth High School at Plymouth, Washington County. He left in 1892 for Durham to teach in the newly opened Morehead School (also called the Durham Graded School until the opening of the new Durham Graded School building in 1894). Toms was soon made principal of the school and a trustee of the Durham public schools, which at that time retained a distinctly private character, relying heavily on private contributions and tuition. In June 1894 he was elected superintendent of the Durham public schools.

In the late 1890s Toms gained considerable notice around the state as a progressive educator. He introduced the first course of manual training in a white school in North Carolina and brought in a teacher from the Pratt Institute in New York to teach it. In 1896 he spoke to the State Teachers Assembly at Asheville on manual training. He also introduced such "novel features" as current events and North Carolina history to the curriculum of the graded school and succeeded in acquiring Peabody funds to support the new programs.

Less well known were his efforts to improve educational opportunities for blacks in Durham. In 1896 Toms opened a new graded school building for blacks and installed the same manual training program he had begun in the white school, as well as the standard academic curriculum. The year before he had obtained Peabody funds for that purpose, and in September 1896 he convinced Washington Duke to contribute money for the purchase of new desks for the school.

It was in these first years in Durham that Toms became associated with the Duke family. Washington Duke had been involved for some time in local school affairs, and so Toms naturally had many occasions to deal with him. Toms solicited contributions from Washington Duke to serve a variety of needs: new desks and materials and a night school for working people in Durham. The night school was taught by regular graded school faculty, but, unlike the day school, no tuition was charged. Toms also consulted Duke on political matters that might affect the schools.

Toms became associated with Benjamin Newton Duke, the son of Washington Duke and the brother of James Buchanan Duke, through his work as a trustee of the Oxford Orphans Asylum at Oxford, Granville County. He and Benjamin Duke both served as state-appointed trustees for the Masonic order throughout the 1890s, and the two made several trips together to Oxford in 1896 and 1897. During this time Benjamin Duke became better acquainted with Toms's abilities.

In February 1897 Toms was elected to the chair of pedagogy at The University of North Carolina. But he did not have much chance to make an impression there, for on 1 Sept. 1897 he received a note from Ben Duke requesting a meeting "to talk important business matters." The next day Duke offered to make Toms the manager of the Durham plant of the American Tobacco Company. Toms readily accepted the position and began work in October. He had clearly mastered the technical aspects of tobacco manufacturing within a year and a half, though little is known of his business activities in Durham or later in New York. With the formal dissolution of the American Tobacco Company in 1911, Toms moved to New York City as executive vice-president of the Liggett and Meyers Company (also operated by the Duke family). He became president of the company in 1928 and held that position until his death.

Despite his residency in New York, Toms remained active in North Carolina affairs. Appointed a trustee of Trinity College (later Duke University) in 1901, he continued to serve until business pressures and poor health forced him to resign in 1932. Actually, Toms acted more as an agent for the Duke family than simply as a trustee of the college. When presidents John C. Kilgo or William P. Few wished to approach the Dukes for a donation, most often they contacted Toms first for his opinion and then arranged an appointment through him with Benjamin Duke. Toms also interceded with the Dukes for others regarding a variety of requests.

A philanthropist in his own right, Toms began by helping individuals who needed financial aid for their schooling. Later he established scholarship funds at The University of North Carolina and Duke University. He also contributed to a variety of causes in Durham and in his hometown, Hertford.

Toms married Mary Newby of Hertford in 1891. Though living in New York for many years, he was a lifelong member of the Duke Memorial Methodist Episcopal Church in Durham. He also helped found the Durham Public Library in 1896. He died in New York and was buried in Durham.

Biennial Report of the Superintendent of Public Instruction (1898).