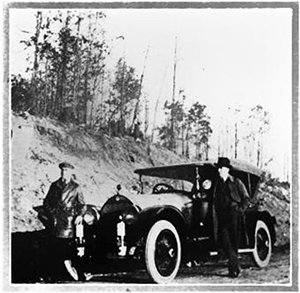 Nello Leguy Teer, construction contractor, was born in rural Orange County, the son of George Washington and Nannie Elizabeth Thompson Teer. His family moved to Durham in 1889, and there the elder Teer, in partnership with A. A. Holder, owned and operated a brickyard. In 1907 the partners became road construction contractors and built the highway between Chapel Hill and Durham.

Nello Teer's formal education was limited to the third grade in the Durham public schools. At an early age he began working in his father's brickyard, where, about 1905, he was involved in an accident that resulted in the loss of his right hand. Having helped on road construction jobs, Teer took over the equipment and goodwill of his father's partnership in 1909 and began to dream, work, and plan for his own business in the construction industry. Among his early projects he graded the sites for several Durham showplace residences—those of Benjamin N. Duke, J. Ed Stagg, and Clinton W. Toms. He also hauled limestone for construction at The University of North Carolina, built culverts, set out shrubbery, and did small grading jobs.

Teer organized his own grading construction company, the Nello L. Teer Company, in 1901 with headquarters in Durham; it was still operating continuously under that name well into the 1990s. Working at first with equipment, mainly mules, temporarily rented and later purchased from his father, Teer developed his business into a worldwide operation involving many millions in capital and annual expenses.

The company's first big contract was the grading of the Hanes Athletic Field at Trinity College in Durham about 1910. Teer then contracted with the Duke family to "revise and improve the road bed alignment and trestle structure" of the Durham and Southern Railway, owned by the Dukes. Subsequently he built approaches to bridges in Durham County and was awarded contracts for highway construction in adjacent Orange, Granville, and Person counties and later in Rockingham County. With the expansion of North Carolina's highway system under Governor Cameron Morrison and his commissioner, Frank Page, in 1921, the Teer firm was one of the leading contractors, at one time having 147 highway miles under construction simultaneously. The company built roads all over the state and eventually constructed more than 12,000 miles of roads in the United States and abroad.

Alert to promote highway interests, Teer was host in 1924 to the historic Pan American Highway Commission at a barbecue in Yanceyville at which more than 7,000 were present, many of them from foreign countries. With the creation of Duke University in the same year, the Teer Company was chosen for much of the grading of the new campus, including Duke stadium. In the same period it did the excavating and grading for Kenan Stadium at The University of North Carolina and the million-dollar Washington Duke Hotel, Durham's tallest building at the time.

In 1926 Teer realized that working with mules (he once owned 400) was unsatisfactory, and he became one of the first Southern contractors completely to mechanize his operations. This process continued; before Teer retired from active duty in 1952, most travel by officials and employees was in their own airplanes.

During and following World War II the Teer Company held contracts for many mammoth jobs including reservoirs, power plants, and missile sites in Kentucky, Virginia, Tennessee, and Florida; tunnels were built for railroads, rivers were diverted through mountains of earth and rock, quarry operations on the eastern seaboard were begun and expanded, and asphalt plants were put into operation. The company received early contracts for work in many foreign countries, notably the Moroccan Air Base in Africa; uncounted air bases and cantonments were constructed in record time. It built 180 miles of the highly acclaimed Blue Ridge Parkway, a job beset with many problems caused by weather and terrain. Turnpikes became one of Teer's major interests, a natural extension of the road-building experiences in North Carolina. He did large sections of the West Virginia, the Pennsylvania, Maine, and Massachusetts turnpikes. He built the U.S. Marine base at Cherry Point and six outlying auxiliary fields, Camp Butner, the Beaufort Marine Air Base, and the air station at Edenton.

Projects in Iceland, Guatemala, Nicaragua, and Panama and the ultimate establishment of a subsidiary in Central America suggest the extent of the company's operations. Teer was always noted for the use of innovative equipment and was hailed by road builders everywhere for his leadership in his field. This resulted in his being elected to a term as president of the American Road Builders Association, of which he was a member for more than forty years.

By 1952, when Nello Teer retired as president, he had built the company into a million-dollar-a-year business. Remaining chairman of the board, he was succeeded by his sons: Nello L. Teer, Jr., became president and Dillard Teer vice-president and secretary-treasurer.

In the early years of his business Teer built a headquarters complex on ninety-two acres four miles north of Durham. There he had maintenance shops, stables for the prize show horses he owned, and pastures for his large herd of Guernsey cows. In 1950 he acquired controlling interest in the Durham and Southern Railway, operating from Durham to Dunn, and he served as director and executive vice-president until his death. He consistently demonstrated humanitarian concern for those who worked for him, used the best obtainable auditors to keep his records, insisted on the very best treatment for all of his equipment, whether mules or machinery, and spent all of his time working at his jobs with a dedication and tenacity that were contagious. He was an active member of the Duke Memorial United Methodist Church and of the Democratic party but never ran for public office.

Teer was married on 16 Sept. 1909 in Durham to Gertrude Adcock, and they had six children: Nello L., Jr., Robert Dillard, Mary Elizabeth (Mrs. Isaac Emerson Harris, Jr.), Margaret Gaynelle (Mrs. William P. Farthing, Jr.), Nellene (died in infancy), and Marion Page (died in early childhood). He died in Watts Hospital, Durham, from injuries in an automobile accident and was interred in the family mausoleum in the New Maplewood Cemetery.