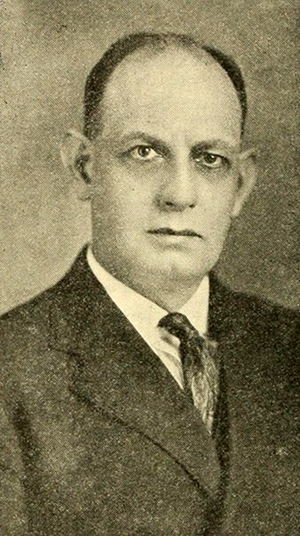 Frank Page, banker, industrialist, railroad builder, and father of North Carolina's modern highway system, was born at Cary of French and English ancestry. His father was Allison Francis Page, a pioneer in the development of railroads, banking, and industry in the Sandhills section of central North Carolina. His mother was Catherine Raboteau Page. Upon completion of his preparatory education at Davis Military School, young Page entered The University of North Carolina for two years of study. He then joined his father and brothers in their far-flung business operations in Aberdeen.

On 17 June 1896 he married Ella Barringer Martin of Chapel Hill. They had three children: Allison Martin, who served with distinction in World War I before being fatally wounded at Belleau Wood; Clara Martin Page Harrison, whose husband, a prominent High Point physician, died of a strange malady apparently contracted while serving in the South Pacific area in World War II; and Frank Martin.

During World War I, Frank Page served in the U.S. Army Corps of Engineers with the rank of major in Europe. When he returned home, Governor Thomas W. Bickett prevailed upon him to undertake the chairmanship of the newly formed North Carolina Highway Commission, a post he held for ten years with distinction. In launching his state's Good Roads program, he managed the effort during its initial decade with skill and with never a hint of scandal.

Page served as president of the American Road Builders Association and of the American Association of State Highway Officials. He was chairman of the National Highway Safety Council by appointment of President Herbert Hoover. As one of five U.S. delegates selected by Calvin Coolidge, he represented his country at the Pan-American Road Congress in South America. He was a member of the State Public Works Advisory Board and the Raleigh Rotary Club. In 1923, The University of North Carolina awarded him the honorary degree of LL.D.

After retiring from the North Carolina Highway Commission chairmanship, Page joined the Wachovia Bank and Trust Company at Raleigh as vice-president; he remained in that position until his death.

A Methodist by affiliation, he was buried in the family plot in Old Bethesda Cemetery near Aberdeen. A bronze plaque commemorating his leadership in North Carolina's outstanding road building program is at the entrance to the Highway Building in Raleigh.