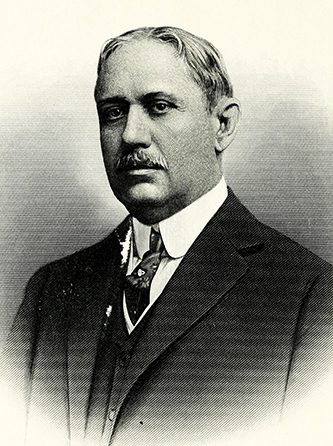 James Edward Stagg, businessman, was born in Company Shops, a village on the North Carolina Railroad that became Burlington. His father, Francis Asbury Stagg, was for many years secretary-treasurer of that railroad. Sarah Anne Durham Stagg, his mother, was the sister of Dr. Bartlett Durham, for whom the town of Durham was named. Young Stagg attended an academy in Burlington and Guilford College.

After leaving college he became a telegraph operator in High Point. There he was discovered by Colonel Alexander B. Andrews, a railroad president of Raleigh, who employed him as his private secretary. Twelve years later he joined a partnership to quarry granite at Greystone in Vance County. In 1893 he returned to secretarial work as the executive secretary of Benjamin N. Duke. When Duke built the Cape Fear and Northern Railway in 1898 to haul freight, he turned the management of it over to Stagg, naming him vice-president and general manager. Later the road was reorganized as the Durham and Southern Railway Company, with a capitalization of a million dollars. By 1906 it was extended until it reached approximately sixty miles from Durham to the Seaboard Air Line at Apex and the Atlantic Coast Line at Dunn. Under Stagg's management, the road proved to be a profitable investment as well as important to the development of that section of the state.

Stagg's success in business led to his election to directorships of cotton mills in Durham and Morganton and to the board of the Fidelity Bank in Durham. In 1907 he was appointed to the board of trustees of Trinity College, and from then until his death he remained a trustee and a member of the board's executive committee. From its inception he was a trustee of Watts Hospital in Durham, and for many years he was a steward and trustee of the Duke Memorial Methodist Church.

On 15 Dec. 1897 Stagg married his employer's niece, Mary Washington Lyon, the daughter of Robert and Mary Duke Lyon and the granddaughter of Washington Duke. They had three children: Sarah Elizabeth, James Edward, and Mary Washington. A genial but unostentatious man, Stagg was known for his generosity. He died at his home, Greystone, in Durham after a two-year illness, survived by his widow, his three children, and a brother, W. L. Stagg. He was buried in Maplewood Cemetery, Durham.