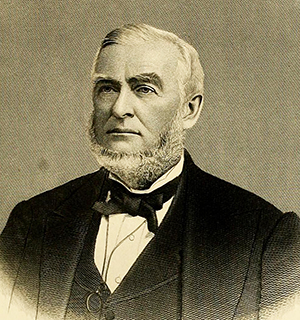 William Nathan Harrell Smith, congressman and judge, was the son of Dr. William Lay and Ann Harrell Smith of Murfreesboro. Dr. Smith died in the first year of his son's life, but Mrs. Smith proved to be "a mother of more than ordinary intellect, great fondness for reading, [and] uncommon mental aptitude." After elementary schooling at Hertford Academy in Murfreesboro, Smith, with the support of his father's relatives in New England, attended preparatory schools at Kingston, R.I., and Colchester, Conn. In 1830 he enrolled at Yale College; becoming a convert to Congregationalism, he considered the study of theology until persuaded by an uncle to take up law instead. Elected to Phi Beta Kappa, Smith was graduated from Yale in 1834, studied law there, and in 1836 was admitted to the bar in North Carolina. He lived briefly in Texas but had returned to his hometown by the time of his marriage to Mary Olivia Wise of Murfreesboro in January 1839. They became the parents of three sons: James Murdoch (died at age eleven), William W., and Edward.

Smith's initial political campaign was for the North Carolina House of Commons in 1840, when he was elected as a Whig. He served in the state senate in 1848 and was elected solicitor for Hertford County in the following year, a post he retained until 1857. With a reputation as an able and effective attorney, he was the Whig candidate for Congress in 1857; though he lost the race, he reduced the Democratic majority in his district. Following another term in the House of Commons, he won election to the U.S. House of Representatives in 1859. During his term in Washington Smith, in spite of his freshman status, won a balloting for Speaker of the House after a protracted conflict. The House clerk, a Republican, noting that Smith's majority was one vote, approached two Pennsylvania Republicans who had failed to cast their ballots and explained the significance of their position. The two men, E. Joy Morris and Winter Davis, went to Smith with a proposal that they would vote for him if he would pledge his support for a protectionist Ways and Means Committee. A protectionist himself, Smith responded that he would make no pledges and should have the speakership unfettered or not at all. The two men then had their votes recorded against Smith, and he lost the contest.

Failing in efforts to avert secession, Smith sought and won election in July 1861 to the Confederate Congress, where he served throughout the Civil War. He was at home in Murfreesboro when the town was occupied by Federal cavalry in July 1863 but found refuge in the countryside until the enemy troops withdrew a few days later. Returning to the House of Commons in 1865, Smith supported liberal legislation for freedmen and was active in behalf of Andrew Johnson's policy of Reconstruction. He was a delegate to the National Union Convention in 1866 and a leader in organizing the Conservative party in opposition to the Radicals.

After serving as a delegate to the Democratic National Convention in 1868, Smith left politics and opened a law practice in Norfolk, Va. From there he moved to Raleigh in 1872. As counsel for Governor William Woods Holden in the impeachment trial of 1871, he argued impressively for the governor's acquittal. In 1878 he was named chief justice of the state supreme court, a post he retained until his death eleven years later. Thoroughly competent and morally above reproach, a prudent jurist, and an effective speaker, though less than brilliant, Smith has been said to have carried with him through life a strong Puritan influence acquired from his New England education. He was an active Presbyterian.