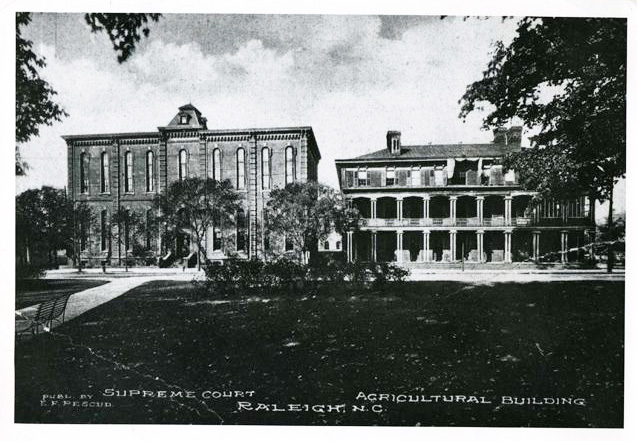 Thomas Ruffin, Jr., lawyer, North Carolina Supreme Court justice, and Confederate officer, was born in Hillsborough, the fourth son of Chief Justice Thomas and Anne Kirkland Ruffin. He was the grandson of Sterling Ruffin, who had been a member of the Virginia House of Burgesses. Young Ruffin attended the academy of Samuel Smith in Rockingham County and was graduated from The University of North Carolina in 1844. He studied law for a year under his father and his brother William before moving to Morganton, where he completed preparation for the bar.

Receiving a superior court license in 1846, Ruffin settled in Yanceyville to begin his practice but in 1848 moved to Wentworth to become the partner of John H. Dillard. In 1850–51 he represented Rockingham County as a Democrat in the North Carolina House of Commons. Three years later, in 1854, he was appointed solicitor of the district, where he served until 1860.

On 20 Apr. 1861, at the beginning of the Civil War, Ruffin enlisted as a private in the Twenty-seventh Regiment but was promoted to captain of the Alamance Company of the Thirteenth Regiment on 8 May. He resigned his commission in October 1861, when urged by Governor Henry T. Clark to fill a vacant superior court judgeship. Nevertheless, he served on the court only until March 1862, when he was appointed lieutenant colonel of his regiment; later in the year he was promoted to full colonel as regimental commander. Ruffin led the Thirteenth Regiment in the Battles of Second Manassas, Sharpsburg, and South Mountain. In the last battle, in September 1862, he was severely wounded, forcing him to resign his command six months later. He soon was appointed presiding judge of General E. Kirby Smith's corps, making him one of only three North Carolinians to serve on a Confederate military court.

Ruffin remained in that post until the end of the war, when he returned to his law practice in Graham. In January 1868 he moved to Greensboro to enter into partnership with Judge John H. Dillard and John Gilmer. While there he helped to organize the first Episcopal church in Guilford County. When Ruffin's health deteriorated, he had to abandon his practice. In December 1870 he moved to Hillsborough and opened an insurance agency. With improving health he again practiced law and in 1874 ran as an independent for the judgeship in the Seventh District against the Democrat, John Kerr. In a hotly fought contest, in which Judge Kerr accused Ruffin of being a traitor to the Democratic party, Ruffin lost the election by a little over four hundred votes.

In August 1875 Ruffin entered into partnership with John W. Graham, which, with the exception of two years (1881–83) when he served on the North Carolina Supreme Court, lasted until his death. During this period Ruffin acquired a reputation as one of the state's best lawyers. In 1884 he headed the state's delegation to the Democratic National Convention. His greatest contribution to North Carolina, however, was in helping—without charge—to prepare the contract for the sale of the Western North Carolina Railroad. For this service he and George Davis were called by Governor Thomas Jarvis, "the ablest, most powerful, and most unselfish men in the state."

Ruffin married Mary Cain of Hillsborough in 1858, and they were the parents of three sons and a daughter. He was buried in the St. Matthews Episcopal churchyard, Hillsborough.