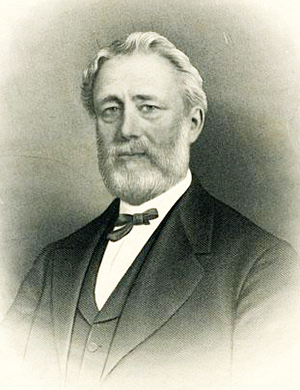 William Blount Rodman, lawyer and jurist, was born in Washington, Beaufort County, the son of William Wanton and Polly Anne Blount Rodman. His first known ancestor was John Rodman, an Irish Quaker who died in Barbados in 1686 and whose son John, a physician, moved first to Rhode Island and then to New York City by 1698. Rodman's father, the son of John and Marcia Pell Rodman of Pelham Manor in Westchester County, N.Y., moved to North Carolina about 1810 and on 6 June 1811 married the daughter of Mary Harvey and John Gray Blount of Washington. To them were born two girls and one boy, William Blount. Orphaned at age eight, Rodman together with his sisters were reared by his maternal grandfather and his aunt, Patsey Baker Blount. Rodman was a precocious child who loved to read and study. At age seven he could scan and translate Latin. He entered The University of North Carolina at age fifteen and was graduated first in his class at nineteen, having gained reading proficiency in Latin, Greek, French, and German. Rodman developed the habit of reading omnivorously and assimilating all that he read.

Before the Civil War he was devoted mainly to the practice of law. After studying under William Gaston and being admitted to the bar in 1838, he established a lucrative practice specializing in land law in Beaufort, Pitt, Martin, and Hyde counties. In 1854 Rodman was appointed to a three-man commission to revise the North Carolina Code; this work resulted in the revision of 1855. In his pleadings he was an eloquent speaker who depended more on reason than passion to carry his argument. Because Rodman was a Democrat and his home county voted Whig, he made few ventures into politics. In 1842 he ran for the legislature and was defeated, and in 1860 he was a Breckinridge elector. When Abraham Lincoln was elected president, Rodman advocated secession.

Although Rodman served the Confederacy well, the Civil War caused him great financial loss. On 21 Oct. 1861 he organized Company C, Fortieth Regiment, North Carolina Artillery, known through 1862 as "Rodman's Battery," and was commissioned a captain. Because his guns had not been mounted, his battery fought as infantry at the Battle of New Bern in March 1862. On 13 March he was promoted to major of quartermaster and assigned to Lawrence O'B. Branch's Brigade. Then on 20 Dec. 1862 President Jefferson Davis appointed him presiding judge of a military court with a rank of colonel and sent him to General Edmund Kirby Smith's corps in Virginia. When Rodman learned that General Robert E. Lee would surrender at Appomattox, he walked from Pamplin's Station, Va., to Greensboro to surrender with General Joseph E. Johnston. When the war began, Rodman had expected that Washington, his home, would fall to Union forces, so he bought a plantation near Greensboro as a haven for his family. As anticipated, his plantation just across the river from Washington was pillaged and destroyed, and over one hundred slaves were carried off and scattered. Union forces seized as abandoned property all of his furniture, household goods, stock, and farm implements and destroyed many of the plantation buildings. But Rodman returned home and managed to regain his fortune. At his death he was a leading landholder in eastern North Carolina. 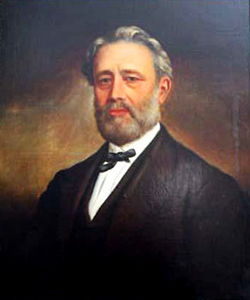 Rodman is most noted for his activities during Reconstruction. He believed that because Congress and the GOP would control Reconstruction, native whites should join the Republicans in drafting a new state constitution in order to restrain their excesses. Although other political leaders in Beaufort would not follow him, he joined the Republican party and was elected a delegate to the constitutional convention of 1868. As chairman of the judiciary committee Rodman found his committee so badly divided that he had to submit the major points on the judiciary to the convention for its decision. He did not like the article as finally drafted because it provided for the popular election of judges. But the provisions in the constitution limiting county taxes and establishing a ratio between poll and property taxes were drafted by him. His conservative views distinguished him in the convention. Without actively seeking the office, Rodman was elected associate justice of the state supreme court in 1868 and served for ten years. His decisions demonstrated scholarship and erudition in the law. From 1868 to 1873 he and two other state commissioners drafted codes of civil procedure and criminal procedure and a penal code. Only the code of civil procedure, adapted from the New York code, was approved by the legislature.

He became indirectly involved with George W. Swepson but denied that this relationship affected his supreme court decisions. In August 1869 Rodman went to the Nicholas Hotel in New York City, as was his habit before the war, and met Swepson, who offered his guarantee for the margin for Rodman to purchase $100,000 of North Carolina bonds. Instead of rising, as Rodman expected, the bonds fell sharply in value and were sold at a loss.

Of medium height with a handsome face and dark hair, Rodman was noted for his modesty, courtesy, friendliness, reasonableness, indulgence of his family, and reserved nature. He died a few days after suffering a serious fall and was buried in Oakdale Cemetery, Washington.