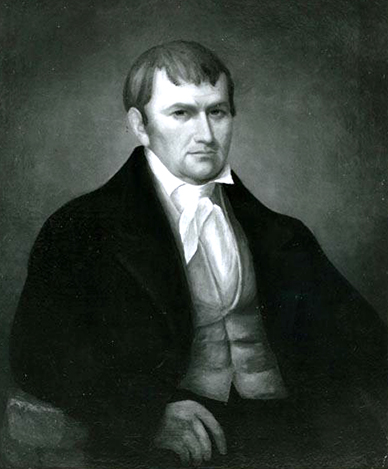 James Robertson, pioneer, surveyor, soldier, Indian agent, political leader, and founder of Nashville, Tenn., was the son of John and Mary Gower Robertson. Born in Brunswick County, Va., he moved with his family to then Johnston County (now part of Wake County), N.C., in 1750 and spent his youth on a 320-acre farm, located on the south side of the Neuse River, that his father had purchased from Nathaniel Kimbrough. Although he obtained only limited formal schooling, he appears to have been at least acquainted with current political thought. Robertson was married in Wake County on 28 Oct. 1768 to Charlotte Reeves, the daughter of George and Mary Reeves; the couple had eleven children, nine of whom grew to adulthood.

While accompanying Daniel Boone on his third journey across the Blue Ridge Mountains in 1769, Robertson discovered the fertile region along the Watauga River. In 1771, after the Battle of Alamance and the defeat of the Regulators with whom he had a great deal of sympathy, Robertson led a group of sixteen families from the outskirts of present-day Raleigh across the mountains to the Watauga River Valley to settle. They were joined in route by Daniel Boone and his brother, Squire, from the Yadkin Valley, along with others from the Sandy Creek Baptist Church section of Orange (now Randolph) County, all of whom were leaving North Carolina to escape the tyranny of the Royal government. The settlement soon saw, however, the need for some sort of government; consequently, under the leadership of Robertson and John Sevier of Virginia, they drew up a government modeled after that of a typical Virginia county. The resulting Watauga Association formed a court of five men to undertake the business of government; both Robertson and Sevier were among the original members. This government was the first one free and independent of a foreign crown in North America, independent in the sense that it was organized without reference to outside authority.

During these years Robertson was very active, and not only with matters relating to the government of Watauga, although most had to do with Indian affairs. He was appointed as one of the first agents for Watauga in negotiating with the Indians on the terms of the lease for the land on which the settlement was prospering. In 1774 he participated in Lord Dunmore's War at the Battle of Point Pleasant, and in 1775 he played a vital role as negotiator in Richard Henderson's purchase of Kentucky lands from the Indians. Concurrently he held the rank of captain in defense of Watauga's settlements against the attacks of the Cherokee. Robertson was well acquainted with the Cherokee, as he lived among them for part of 1777, and was instructed by the North Carolina Assembly in 1778 to live with them in the fulfillment of his task as agent for the state, but he soon resigned this post. Meanwhile, in 1776 he had signed the petition of the Wataugans for incorporation into North Carolina.

Early in 1779 Robertson led an exploratory party of nine men overland across the Cumberland Mountains from Watauga and contemplated future settlement at French Lick, a trading post on the Cumberland River, on land purchased by the Transylvania Company. On 1 Jan. 1780 he returned with a small group of settlers and they founded what is now the city of Nashville, Tenn. In collaboration with Judge Richard Henderson, founder of the Transylvania Company, Robertson and the rest of this small settlement drew up the Cumberland Compact, signed on 1 May 1780, which set up a government for the entire western North Carolina territorial district that was patterned after the Watauga Association. Robertson was elected chairman of the twelve-man Committee of the Cumberland Association, and he exhibited a firm and wise leadership during the early, critical years of the settlement. His own lack of education fostered his interest in providing educational facilities for the settlement. When the North Carolina Assembly chartered Davidson Academy (later the University of Nashville) in 1785, Robertson became a trustee. In the same year he represented his county in the North Carolina Assembly. When difficulties in the western settlements led the frontiersmen to believe that the states were indifferent to their interests, Robertson, with others, played an active though obscure part in the Spanish Conspiracy from 1786 to 1789. He sat again in the North Carolina Assembly in 1787. During the same year he led the Coldwater expedition against the Indians.

At the organization of the Tennessee country into the territory of the United States south of the River Ohio (commonly known as the Southwest Territory) in 1790, President George Washington appointed William Blount territorial governor. Blount, on 19 Dec. 1790, commissioned Robertson justice of the peace for Davidson County as well as lieutenant colonel commandant of the Davidson County militia. Early the next year Washington appointed him one of the brigadier generals, a post he resigned after ordering the militia on the Nickajack expedition against the Indians. Only three years earlier, Robertson had aided Blount in negotiating the Holston treaty with the Cherokee.

Robertson remained active in politics. In 1796 he represented Davidson County in the constitutional convention of Tennessee, and in 1798 he entered the Tennessee Senate in place of Thomas Hardeman, who had resigned. During that year Governor John Sevier appointed him to represent Tennessee at the first Treaty of Tellico between the United States and the Cherokee. In 1807 he acted with Return J. Meigs in negotiating yet another treaty with the Cherokee. During his later years Robertson served as Indian agent to the Chickasaw, residing for some time at Chickasaw Bluffs, site of present-day Memphis, and there he died and was buried. His remains were removed in 1825 and reinterred in the old city cemetery in Nashville.