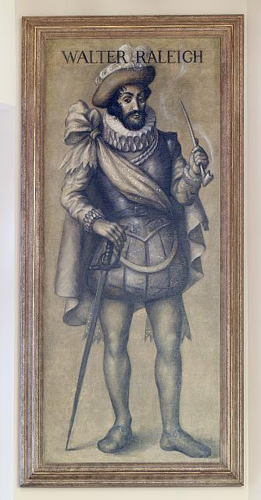 Sir Walter Raleigh (or Ralegh), courtier, sponsor of colonial enterprises, poet, and historian, was born at Fardel of a Devon, England, family, poor but with good connections. His father was Walter Ralegh; his mother, Katharine Champerowne, was previously the wife of Otto Gilbert, father of Humphrey Gilbert. Young Raleigh was taken to France by Devon mercenaries in Huguenot service and probably was there from 1568 to 1571. He returned to Oriel College, Lyons Inn, the Middle Temple, for rapid education from 1572 to 1576. Katherine Ashley, a relative, was close to Queen Elizabeth and is credited with edging both Gilbert and later his half brother Raleigh into the royal Court. Somehow Raleigh accumulated a little capital.

In 1578 Gilbert got a grant to explore and occupy lands not previously taken over by Europeans, meaning in fact eastern North America. Raleigh was given command of the Falcon, a former royal ship owned by the Hawkins firm of Plymouth. The expedition set out in November for North America by way of the Caribbean, but most of the ships turned back. Falcon went farthest, perhaps to the Cape Verdes, acted as a pirate, and crawled back leaking.

Gilbert next planned extensive colonies in Norumbega (New England) and Raleigh partnered him. Meanwhile, Raleigh was rising at Court, winning the queen's attention, getting handsome gifts, and also serving for a time as a soldier in Ireland, from which he wrote imposing letters for solving Irish problems. By 1582 he bought a new ship at Southampton, named it the Bark Ralegh, and prepared to go to reconnoiter the Gilbert objective. But Gilbert did not get away in that year, nor until 1583, by which time the queen forbade Raleigh to leave her to accompany him. Moreover, his ship returned very soon—allegedly because of inadequate stores on board. Gilbert claimed Newfoundland for England in August, but was himself drowned at sea after having to give up his exploring enterprise. As soon as Gilbert's associates ended their projects in 1584, Raleigh obtained from the queen a seven-year renewal of Gilbert's patent, which gave him a free hand to explore and colonize between Florida and Cape Breton.

A reconnaissance expedition under Philip Amadas and Arthur Barlowe brought news in September 1584 of the Carolina Outer Banks and Roanoke Island as well as two Indians, Manteo and Wanchese, to support hopes of successful colonization. Raleigh, influenced by Richard Hakluyt, wished to involve the queen and Parliament. He failed in both, though the queen allowed the name Virginia to be given to the newly discovered land, while members of Parliament (of whom Raleigh was one) rallied around the enterprise. Raleigh had a seal made as lord and governor of Virginia. He was not committed to long-term colonization, however. His expedition under Sir Richard Grenville (again he was not allowed to join it) was to leave Ralph Lane to try out the place as a base against Spain as war was looming, to make a survey of its resources (which Thomas Harriot and John White were to carry out), and to explore the hinterland.

The colony was less elaborate than planned because some ships were diverted to Newfoundland on a naval expedition. In July and August a settlement was made. Raleigh got good reports from Grenville in October 1585. The colony did much of what was expected of it, but supplies did not arrive—Raleigh's ship reached the Outer Banks and then Grenville's squadron with more supplies and men, but they were too late. Now the plan was for Raleigh to stand back so as to encourage and give some money to an independent group under White in order to settle a small community on Chesapeake Bay, a deep-water harbor. White's colonists duly made their way to America in 1587 but were left by the seamen at Roanoke Island, not Chesapeake Bay. Finding Grenville's small party gone and their own stores small, they sent John White back to Raleigh for aid. Why White did not return at once is not clear, but Raleigh and Grenville prepared a new squadron in 1588 to turn the bay into a base against Spain. But the ships were embodied in the royal navy awaiting the Spanish Armada, while Raleigh was busily engaged in defensive preparations; White's two supply pinnaces set out late and were overwhelmed by pirates off the Azores.

White returned totally disillusioned to take his place as a settler in Raleigh's other colony, that in counties Waterford and Cork in Ireland, built up successfully by his agents since 1586. Raleigh as captain of the guard was responsible for the queen's safety and played an active role against the Armada. After that he neglected North America. His patent remained good if the 1587 colony could be assumed to be alive, while White's brief visit to Roanoke Island in 1590 showed that some of its members had gone to Croatoan Island with friendly Indians. He doubtless hoped that when war had died down he could revive his concern with settlement in North America and renew contact with the settlers.

Raleigh had a distinguished position at Court, but his pride and capacity for quarreling, together with the death of powerful friends, the earl of Leicester and Sir Francis Walsingham, left him vulnerable, especially as the young earl of Essex was rising in favor. His secret marriage to Elizabeth Throckmorton, one of the queen's ladies in waiting, was disclosed in the summer of 1592, and his lies led to Raleigh's imprisonment in the Tower of London for a time, and to his disgrace, so that he retired to Sherborne to plan a comeback. Since 1587 he had been interested in the prospects of Guiana. A civilized, gold-rich people were supposed to live near the Orinoco River.

Raleigh hoped to enter the river with the assistance of local Indians and prospect for a base for an English colony as well as possible gold. With four ships he spent from February to September 1595 in his only American venture. He immobilized the Spanish at Trinidad, penetrated the delta of the Orinoco, and ascended the river, making friends with Arawak Indians as he went.

Exploring parties found indications of gold in various areas, while he himself ascended the Caroni Gorge but found no trace of El Dorado, the alleged ruler of the "empire," though Raleigh went home believing that there was gold accessible and that England might invade and colonize an area that would threaten Spanish Peru. At home he found little credence, though he published a tract on Guiana in glowing colors and continued to send exploring parties to the area. He did not, as he intended, visit Virginia on his way home. He was allowed to play a significant part in the attack on Cadiz in 1596 and won back some influence at Court.

He gradually resumed an interest in Virginia. Hakluyt was making propaganda for him in his The Principal Navigations (1598–1600), and perhaps 1599 saw the first of the small expeditions he sent to trade along the coast and he got news of the "Lost Colonists." In 1602 Samuel Mace explored the coast south of Cape Hatteras for him without success. In 1603 Bartholomew Gilbert lost his life off the Eastern Shore on another voyage. It seems likely that Mace in 1603 penetrated Chesapeake Bay, seized several Indians, and got some news of white men residing to the south of the bay, but this is not yet proved. Moreover, he took over sponsorship of a venture to the New England coast in 1602 under Bartholomew Gosnold that had aimed to set up a trading post on Elizabeth Island, and he authorized an expedition under Martin Pring to trade in Cape Cod Bay in 1603. As governor of Jersey (1600–1603), he had a post of some responsibility, but he failed to make friendly contact with the heir apparent, James VI of Scotland, who had been warned about his treacherous and arrogant character. When James succeeded to the throne in March 1603, Raleigh, unwisely, advocated stepping up war with Spain, which James was determined to end. He was accused, ironically, of plotting to depose James in favor of Spanish interests; in July he was imprisoned in the Tower of London. If news did arrive in September that the Lost Colony was still in existence, he could do nothing about it. His rights to North America and his offices were taken away, and the plot frame-up culminated in a show trial at Winchester in December at which he was sentenced to die as a traitor.

Raleigh was reprieved but not pardoned and remained prisoner in the Tower, where in 1605 he was joined by the eighth earl of Northumberland, an old friend in whose service Harriot now was. He kept contact with Virginia affairs, managed to maintain some trade with Guiana, and ingratiated himself with the queen and, as he grew up, the young Prince Henry. Since James would not release him, Raleigh worked at a history of the world and on chemical experiments. By 1614 a new secretary of state, Sir Ralph Winwood, induced James to release Raleigh to go gold hunting in Guiana, as he was short of money. Released in 1616, Raleigh found many willing to back his venture, he having become something of a legendary figure. No less than fourteen ships left the Irish coast in August 1617, under strict orders not to interfere with the Spanish. After arrival near the mouth of the Orinoco, Raleigh was too ill to go farther, but Lawrence Keymis was certain that he knew the location of a gold mine. A Spanish garrison was found at San Thome, and there was fighting in which Raleigh's eldest son, Walter, was killed. No gold mine was located and in March 1618 the parties returned, with nothing to show. The sentence, deferred since 1603, was revived on account of the breach with Spain, which threatened James's policies. Raleigh was beheaded on 29 October, making an eloquent speech from the scaffold and after his death becoming a popular hero as a patriot who stood up against Spain. For a time his wife kept his head in a velvet bag, but his body was interred in St. Margaret's Church, Westminster, London.

Raleigh had great gifts as a writer and poet and considerable statesmenlike insights, including his belief that England should gain an overseas dominion. His confidence in the prospects of Virginia and Guiana were held firmly to the last. He was arrogant and, though he could play the courtier, was regarded as cynical and unorthodox in religion. He was greedy for office, power, and money and never got enough to meet his desires. But his tragic career, its heights and depths, fascinated contemporaries and his successors. He was intellectually and in action a genuine pioneer.

and Sir Walter Raleigh and the British Empire (1975).