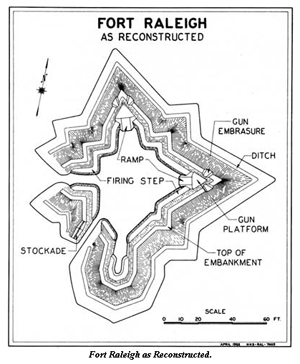 Ralph Lane (ca. 1528-October 1603), a professional soldier, served as governor of the first colony attempted by the English in America. At that time, the region that encompassed Sir Walter Raleigh’s land patent was called Virginia in honor of Queen Elizabeth I, the Virgin Queen. The first colony was organized as a military venture from which the Spanish, colonial rival of the English, could be harassed and to serve as a base for the exploration of the new land. In the end, the first colony was abandoned and the survivors returned back to England. It failed due to the settlements’ poor location and the colonists’ undue suffering; nevertheless, Lane’s colony provided the English with valuable knowledge and experience for future endeavors.

Lane, born to Sir Ralph Lane and Maud Parr Lane of Northhampton, attended Oxford University in 1554 and served in the English Parliament in late 1550s and early 1560s. He evidently never married. By 1563 Lane was serving in Queen Elizabeth I’s court, marking the beginning of a career of service to queen and country. Lane participated in a force that suppressed a rebellion in Scotland in 1569 where he gained accolades for his military skill. By the early 1570s, Lane had involved himself in maritime affairs which included a queen’s commission to seize ships in 1571. By the late 1570s and early 1580s, he was developing plans and offering his services in helping England struggle with Spain. In 1583, Lane received a commission to go to Ireland and direct the construction of forts.

In 1585 the queen recalled Lane from Ireland and he was given command of the colony that Sir Walter Raleigh was organizing to sail to Virginia (Roanoke Island). Raleigh evidently personally invited Lane to command the land expedition. The company was organized as a military expedition with soldiers and support personnel but also included artist John White and scientist Thomas Harriot. In April 1585, seven ships with about 600 men under the overall command of Sir Richard Grenville left England. After a storm scattered the fleet and reduced it to five ships, the company regrouped. They arrived at the Outer Banks by June. By August, the colony had come ashore and built a fort following an invitation from the Indians. Grenville’s fleet left at the end of August after being unable to secure a good harbor.

Lane’s colony of 107 men lasted for only eight months. Lane’s men explored the countryside with the intent of finding a better site for settlement. The colony suffered because of the lack of supplies and Lane’s lack of skill in dealing with the Indians. Eventually, Lane decided to abandon the colony. The conditions for success were not favorable due to the colony’s small size and the ravages of storms. On June 18 or 19, 1586, a fleet led by Sir Francis Drake left Roanoke carrying the first English colonists back home.

Lane was never involved in another colonization expedition but remained active in service to his county. He provided the foreword to Thomas Harriot’s Briefe and True Report of the New Found Land of Virginia (1588) and his account of the colony appeared in Richard Hakluyt’s Principal Navigations (1589). Lane was back in Ireland in 1592 serving as “muster master general” and “clerk of the check of the garrison” and remained in that country for the rest of his life. By 1601 Lane’s physical weakness had made him unfit as muster master. Lane died in Dublin, Ireland, in October 1603 and was buried at St. Patrick’s Church on the 28th of that month.

Quinn, David B., and Alison M. Quinn. 1982. The First colonists documents on the planting of the first English settlements in North America, 1584-1590. Raleigh: North Carolina Dept. of Cultural Resources, Division of Archives and History.