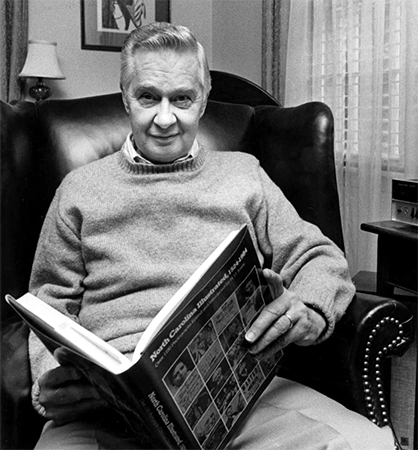 William S. Powell was a historian, author, teacher, and librarian known for his extensive work on the history of North Carolina. He was born April 28, 1919 in a house built by his great-grandfather along the Neuse River between Smithfield and Goldsboro. When Powell was a year old, the family moved to Statesville where his father was employed by the State Highway and Public Works Commission and his mother worked as a school teacher. Powell's interest in history developed early through stories told by his grandmother, who had lived through the Civil War. After finishing high school in Statesville, Powell attended Mitchell College for two years before transferring to the University of North Carolina at Chapel Hill, where he earned a bachelor's degree in 1940.

After college, Powell returned home to Statesville where he worked briefly on a local newspaper and began contributing historical sketches to The State magazine. These articles for The State marked the beginning of more than 60 years worth of contributions to North Carolina's historical literature, in which he produced well over one hundred books and articles and would come to be known as the "dean of North Carolina historians."

Powell joined the Army at the outbreak of World War II. He was stationed at Fort Knox in Kentucky and served overseas in the Philippines and Japan. After the war, he worked again as a newspaper reporter for a couple of years before returning to the University of North Carolina, where he earned a master's in library science in 1947. His first job as a librarian was at Yale University, where he worked as an assistant in the Rare Book Room. Claiming that he "couldn't take the Connecticut winter," he soon returned home to North Carolina and found a job in Raleigh as a researcher in the North Carolina Division of Archives and History. One of his duties was writing text for new highway historical markers. It was at the Archives that he met Virginia Penn Waldrop, who he would marry in 1952. Virginia Powell has played a vital role in Powell's work, serving as his valued research assistant. 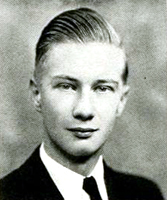 Powell was a creative and indefatigable collector during his time as Curator of the North Carolina Collection. Reaching beyond traditional books and periodicals, he sought out materials that would become essential sources in the writing of North Carolina history. To give just two examples, he acquired from WRAL a complete set of original typescripts of Jesse Helms's television editorials, documents that have been used by many students and historians to trace the development of the political views of the future Senator; and he tracked down rare issues of The Crusader, the newsletter published by Civil Rights activist and North Carolina native Robert F. Williams, some of which were published in Cuba and China after Williams's self-imposed exile from the United States.

In 1972, Powell left the North Carolina Collection to join the faculty of the history department at UNC-Chapel Hill as a Professor of North Carolina History, taking over the position recently vacated by the retirement of Hugh Talmadge Lefler. Powell's appointment was a matter of some controversy due to his lack of a doctoral degree. The dissenting faculty members were ultimately swayed by his extensive record of scholarly publication. Powell remained on the faculty until 1986, when he retired to devote more time to his own research and writing. He estimated that he taught more than 6,000 students during his time on the faculty and said, at his retirement, "The one thing I've always tried to do is to rub my enthusiasm for North Carolina off on my students, to make them proud to be North Carolinians and to try to help them understand why North Carolina is the way it is today -- the good and the bad."

As a historian, Powell was interested in exploring 17th- and 18th-century North Carolina. He received a Guggenheim fellowship in 1956 that enabled him to travel to England to conduct research on the members of the Lost Colony. Many of his earliest publications were related to Colonial North Carolina and the early history of books and libraries in the colony. 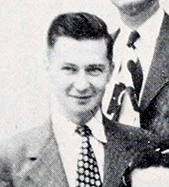 After he joined the staff of the North Carolina Collection in the 1950s, Powell's scholarly output expanded to include bibliographies and reference works. His annotated guide to North Carolina fiction, published in 1957, was evidence of his growing interest in all aspects of the state's history and culture. Powell edited a biographical dictionary called North Carolina Lives: The Tar Heel Who's Who, published in 1962, laying the groundwork for the much more comprehensive Dictionary of North Carolina Biography to come later.

In 1966, Powell published the first edition of one of his best-known works, the North Carolina Gazetteer. Described by historian H. G. Jones as one of those books that makes us ask, "How did we ever get along without it?", the Gazetteer is an exhaustive listing of place names in North Carolina, providing details on each including their histories and the origins of their names. It is the result of an incredible effort on Powell's part and the work of hundreds of local volunteers around the state, including contacts at historical societies and libraries in each of North Carolina's one hundred counties. The Gazetteer remains a popular resource and was reissued in 2010 in a new edition.

Following his comprehensive work on the places of North Carolina, Powell began working on the people. Over thirty years in the making, the Dictionary of North Carolina Biography was published in six volumes by UNC Press between 1979 and 1996. The more than 3,500 biographical sketches were written by more than a thousand different historians, authors, and librarians around the state, with many composed by Powell himself. Perhaps even more impressive than the size and breadth of the "DNCB" is the fact that it was entirely a volunteer effort, evidence of Powell's ability to find and inspire others interested in documenting and sharing North Carolina's history. When the DNCB was presented to Governor Jim Hunt in a ceremony at the state Capitol, Hunt summed up Powell's career, saying "Think how much less this state would be if we didn't have him."

Powell completed yet another essential reference work in 2006, when he published the Encyclopedia of North Carolina. Like the DNCB, it was a volunteer effort, relying on hundreds of different people to contribute entries, all of which were assigned and edited by Powell. Inspired by the Encyclopedia of Southern Culture, Powell made an effort to include both serious and lighthearted entries in the volume. Alongside expected entries, like those on the shipbuilding industry in North Carolina, or the Civil War battles set in the state, the Encyclopedia also includes entries on Tarboro's refrigerated outdoor "cool pool," a short history of penmanship in the state, and a description of the "semimythical wampus creature."

Powell, working with his army of volunteers, has provided North Carolina with a library of historical literature that would be the envy of any state. His devotion to his work did not wane with age, as he continued to collect, travel, and speak about North Caroliniana well into his eighties. His legacy will be measured not just by the amount and quality of work he produced, but by the many students he inspired through his years of teaching, and by the countless citizens who have appreciated and gained from his life's work of documenting and celebrating the people, places, and history of North Carolina.