Viewpoint was a series of more than 3,000 TV and radio editorials broadcast to much of North Carolina from 21 Nov. 1960 to 11 Nov. 1976. The series was originated by Jesse Helms, then an executive vice president of Capitol Broadcasting Corporation and news director for its WRAL TV and radio stations. Carried on WRAL-TV as well as the state's Tobacco Radio Network (later the North Carolina News Network), Viewpoint reached much of Piedmont and eastern North Carolina and, during its heyday, offered Helms a powerful platform for espousing his views on political and social issues. But the influence of the program and its host proved far more significant and long lasting. Helms skillfully used the power of the media to elevate himself and his views to statewide prominence, and, when he declared in 1970 that he would change his party affiliation from Democrat to Republican, it helped catalyze a shift that already had begun in eastern North Carolina. Many in Helms's audience followed suit, dramatically altering the state's political geography. Two years later, Helms would leave Viewpoint and use his fame to help launch his successful campaign for a seat in the U.S. Senate. 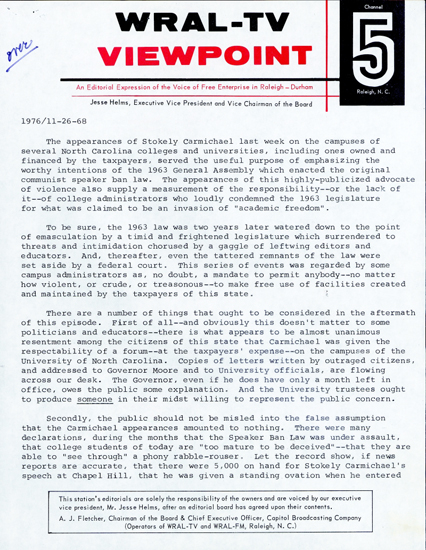 Helms, the son of a Monroe police and fire chief, attended Wingate and Wake Forest Colleges before beginning a lengthy career in the print and broadcast media. After holding editorial positions at the Raleigh News and Observer and Raleigh Times, he served in the navy during World War II. Soon after the war, Helms was hired as a news anchor at WRAL-AM radio. It was there that he first honed his use of mass media for political purposes. While covering the 1950 U.S. Senate race between Willis Smith and Frank Porter Graham, Helms produced and paid for radio ads that promoted Smith's candidacy. A year after Smith defeated Graham in a heated campaign marked by race-baiting and accusations that Graham was a communist sympathizer, Helms joined Smith in Washington, D.C., as a staff assistant. After Smith's death in 1953, Helms returned to Raleigh and became executive director of the North Carolina Bankers Association. There, he used the association's trade magazine, the Tarheel Banker, as an outlet for sharply written editorials on such issues as free enterprise, school desegregation, and community mores. He went on to serve two terms as a Raleigh city councilman before returning to WRAL-TV in 1960 to run its news operation.

Helms's five-minute weeknight Viewpoint editorials were the natural culmination of these experiences, and he harnessed the growing power of broadcast media with remarkable savvy. He covered a wide range of topics, frequently linking national and international issues with more local issues. Among his frequent targets were what he saw as overtly liberal or immoral aspects of American culture, including the excesses of big government, a "left-wing" bias in national TV network programming, the abuse of academic freedom, the evils of communism, a lax criminal justice system, the inadequate compensation of police and fire personnel, and a wasteful and unnecessary welfare system. He touted an agenda that supported the free enterprise system, the death penalty, prayer in public schools, and a strong national defense. He strongly opposed abortion, "subversive" civil rights activities, the Equal Rights Amendment, and the "sex, drugs, and rock 'n' roll" of the radical counterculture.

Another of Helms's favorite targets was the perceived liberalism of the University of North Carolina at Chapel Hill, which represented for him much of what ailed 1960s America. Although he was not shy in voicing his disdain for the university, Helms is wrongly credited with the famous remark that there was no need to build a zoo in North Carolina when the state could just "put a fence around Chapel Hill." In fact, that statement was made by editorialist Chub Seawell, who also argued that the university had no right to use academic freedom to help "god-denying liars" espouse their version of the truth.

Helms's final Viewpoint editorial gave no indication of his permanent departure, but, several days later, A. J. Fletcher, chairman of the board and chief executive officer of the Capitol Broadcasting Corporation, announced on the air that Helms intended to run for a seat in the U.S. Senate. That last Viewpoint editorial, number 2,762, which detailed his plan to take a leave of absence in order to seek the Republican nomination in North Carolina, ended Helms's work at WRAL. Although his 1972 election as the state's first Republican U.S. senator in the twentieth century was hardly the opening chapter in his influential and controversial political career, it did mark the beginning of its most significant phase.

WRAL suspended broadcasts of Viewpoint in February 1972 but resumed them on 8 Feb. 1973 with a new editorialist, William P. Cheshire, who continued to write and present the segments through 11 Nov. 1976. Without Helms as the driving force behind the series and with the increased popularity of FM radio, Viewpoint lost its prominence. WRAL eventually replaced it with fewer regular editorial segments by a wider range of commentators.