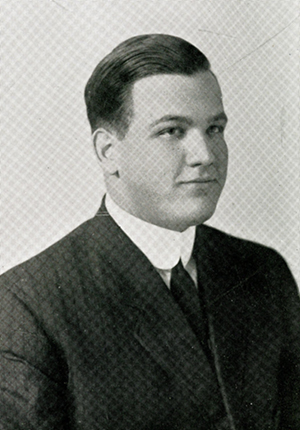 Following his graduation from the seminary, Poteat was a traveling secretary for the student volunteer movement in New York (1916–17). In August 1917 he left for China as a Southern Baptist missionary. Until 1926 he served in Kaifeng, Honan, China, where he preached; built, with a Belgian architect and a Chinese contractor, a large compound consisting of a church, school, and residences; and, in his words, "Worried through a siege, ran into street corner beheadings and hunted ducks and wild swan near the city walls. Escaped in 1926 in zero weather in a freight car with a shivering but cheerful family when the revolution hit our city." Poteat's warnings of the potential danger to the work with the rise of the Nationalist movement and the Bolshevist influence were not taken seriously by the officers of the Foreign Mission Board. He and the board had differences in several areas; for example, the board felt that Poteat was too fascinated with studying the Chinese language when he should be pursuing other activities and it opposed his ecumenical efforts. After fleeing from Kaifeng, however, Poteat continued his work under the auspices of the board as professor of philosophy and ethics at the University of Shanghai until 1929.

In September 1929, following a trip home by way of Siberia and Europe, Poteat moved to Raleigh to assume the pastorate of Pullen Memorial Baptist Church. His brilliant sermons attracted large congregations of non-members as well as members of the church. In 1937 he was called to the Euclid Avenue Baptist Church in Cleveland, Ohio, where he remained until his selection as president of Colgate-Rochester Divinity School in Rochester, N.Y. Poteat moved to Rochester early in 1944 and served until 1948. In the spring of that year he suffered what he referred to as a combination of a coronary and "intestinal gremlins"; because of his health, he was advised to relinquish his administrative duties. His successor at Pullen Memorial having resigned, Poteat was again called by that church and returned to Raleigh in the late fall of 1948. His second term of service ended when he collapsed from a coronary occlusion on his way to perform a wedding at the church; death followed soon after his arrival at the hospital.

Poteat was noted for his versatility. A man of many talents, he was a musician of note: he was an organist, had a superior tenor voice, and wrote words and music to several hymns and anthems. Among those published were "Eternal God Whose Searching Eye Doth Scan," which was used at the opening session of the World Council of Churches meeting in Amsterdam in 1948; "In the End of the Sabbath" (1938); "Jesus Our Joy of Living Hearts" (1950); and "Indifference" (1942). His books include The Reverend John Doe D.D. (1934); Thunder Over Sinai (1936); The Social Manifesto of Jesus (1937); Centurion, a dramatic poem (1938); These Shared His Passions (1938); These Shared His Cross (1939); These Shared His Power (1941); Four Freedoms and God (1943); Over the Sea the Sky, a book of poetry (1945); Last Reprieve ? (1945); Parables Crisis (1950); God Makes the Difference (1951); and Mandate to Humanity (1953). He contributed to Harper's, Saturday Review of Literature, Christian Century, and numerous other periodicals. He also wrote the exposition of Psalms 42–89 for the Interpreters' Bible.

He was an athlete of unusual ability. While in China he was star pitcher on the All-American baseball team. He once defeated political columnist Walter Lippman in a tennis match, and he served as trainer for a challenger for the world wrestling championship in 1916.

An Independent in politics, Poteat was active in the pacifist movement and was a founder and longtime president of Protestants and Other Americans United for Separation of Church and State. He served as a trustee (vice-chairman of the board, 1949) of Shaw University and received gubernatorial appointments to the North Carolina Commission on Displaced Persons, the Board of Charities and Public Welfare, and the Commission of Five to Study State Hospitals. He supported various liberal causes and worked for the rights of blacks, conscientious objectors, and others in minority positions. Poteat was the first clergyman to be invited to address the American Association for the Advancement of Science (1946).

He married Wilma Hardman of Commerce, Ga., on 27 June 1918. They had four children: William Hardman, Harriett Alden, who predeceased her father, Elizabeth McNeill, and Haley Gordon.

In an editorial of 19 December 1955, the day of Poteat's funeral, the Raleigh News and Observer observed: "it is hard to associate with death one who in his goodness and his wit, his courage and his charm was as gay a saint as ever walked our streets." Burial at Montlawn, Raleigh, followed funeral services at Pullen Memorial. There is a portrait of Poteat in the chapel of Pullen Memorial Baptist Church.