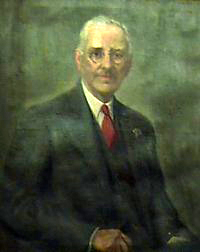 Edwin McNeill Poteat, clergyman and educator, was born near Yanceyville in Caswell County, the youngest of three children of James and Julia A. McNeill Poteat. His siblings were William Louis, president of Wake Forest College (1905–27), and Ida, a teacher at Meredith College. James Poteat was a substantial planter.

Edwin McNeill Poteat received a B.A. degree from Wake Forest College in 1881 and the D.D. in 1894. He was graduated from Southern Baptist Theological Seminary, Louisville, Ky., in 1885, after his ordination to the Baptist ministry the previous year. His first pastorate was the Baptist church at Chapel Hill, from which he resigned in 1886 to become for a few months assistant professor of ancient languages at Wake Forest. From 1886 to 1888 he was a graduate student in psychology and philosophy at Johns Hopkins University. While in Baltimore, he served as acting pastor of Lee Street Baptist Church. He spent the summer of 1888 in graduate study under Otto Pfleiderer at the University of Berlin, Germany.

Beginning in 1888 Poteat was for a decade pastor of Calvary Church, New Haven, Conn., and a special student at Yale University. In 1898 he became pastor of Memorial Baptist Church in Philadelphia, Pa., serving until 1903, when he accepted the presidency of Furman University, Greenville, S.C. Poteat received the LL.D. degree from the University of South Carolina, Columbia, in 1906 and from Baylor University, Waco, Tex., in 1907. Among his contributions to Furman was the enlargement of facilities for teaching the sciences and emphasis on combining the teaching of Christianity and the sciences. Finding administrative duties "continually growing more irksome," he resigned in 1918 to become platform representative of the Laymen's Missionary Movement and the Interchurch World Movement. Poteat had become widely known as a speaker. The editor of the Baptist Courier (1 July 1937) declared that "At the Baptist World Alliance in Philadelphia, 1911, Dr. Poteat proved to be . . . the most popular speaker in the program, and was the only one, we believe, who was implored from all parts of the audience to continue after he had closed."

From 1919 to 1921 Poteat was departmental executive secretary of the General Board of Promotion of the Northern Baptist Convention. In 1921, while visiting his two eldest sons who were missionaries in China, the University of Shanghai invited him to become professor of philosophy and ethics. Poteat held the post for six years. After his return to the United States in 1927, he was interim pastor of the First Baptist Church, Richmond, Va. Two years later he became pastor of Second Baptist Church in Atlanta, Ga. From 1931 to 1934 he taught ethics and comparative religion at Mercer University in Macon, Ga. In 1934 he returned to Furman as professor of ethics and remained on the faculty until his death.

At various times in his career Poteat was a member of the board of managers of the American Baptist Missionary Union and a member of the Baptist Publication Society. He was recording secretary of the American Baptist Education Society, trustee of the Southern Baptist Theological Seminary, life member of the American Bible Society, and president of the Southern Baptist Educational Association. He was a Democrat. His published works include The Religion of the Lord's Prayer (1914), A Campaign Handbook for Christian Education (1918), The Withered Fig Tree: Studies in Stewardship (1921), and The Scandal of the Cross: Studies in the Death of Jesus (1928).

He died in Durham and was buried in the Furman University plot in Springwood Cemetery, Greenville, S.C.