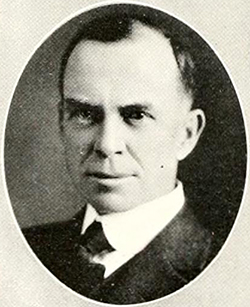 Charles Chilton Pearson, teacher, administrator, and scholar, was born in Richmond County, Va. He received the M.A. degree from Richmond College in 1904, completed one year of graduate study at Columbia University, and received a Ph.D. from Yale. After teaching at Yale and at Washington and Lee, he joined the faculty of Wake Forest College in 1916. In 1917 he was made professor of social sciences and chairman of the department, positions he held until his retirement in 1952. He was a Harrison Research Fellow at the University of Pennsylvania (1925–26) and visiting professor of history for many summers at Trinity College and the University of Virginia.

A noted teacher, Pearson conducted classes in history, government, economics, and sociology. He demanded diligent work, rigorous analysis, and precise thinking, but his courses were always popular. He encouraged scholarly research and to that end devoted much effort, time, and money towards improving the college library in his own and other disciplines. A longtime chairman of the faculty committees on the library and graduate study, Pearson inspired many students to pursue graduate work, especially in history, at Wake Forest and elsewhere. His former students include historians and educators in many other fields, along with administrators, writers, lawyers, physicians, and people in various walks of life. Among his students who were also members of the Political Science Club were Irving Carlyle, W. J. Cash, Christopher Crittenden, and Forest C. Clonts.

Although chairman of one of the largest departments on campus, Pearson found time for many quasi-administrative activities in the area of student life. He established the college bookstore and sundry shop and ran it for several years. He was the first chairman of the fraternity council, a successful debate coach, and sponsor of the influential Political Science Club. Interested in athletics throughout his life, he introduced golf to Wake Forest, organized the area's first golf course, and saw the game become a major intercollegiate sport.

An inveterate scholar, Pearson always gathered research materials—especially on the history of Virginia—during summer trips and other travel. His publications included articles in the Wake Forest College Bulletin and the South Atlantic Quarterly, thirty-two sketches in the Dictionary of American Biography, and a 1932 report to the Virginia General Assembly. He was the author of a hand-book on patriotism for the National Security League during World War I; The Readjuster Movement in Virginia (1917); and, posthumously, Liquor and Anti-Liquor in Virginia, 1619–1919 (1967).

Pearson was a Baptist, a Mason, a member of Phi Beta Kappa, and a charter member of the Historical Society of North Carolina. As a young man he traveled in Europe and the American West and spent some time on a Texas ranch. A campus character, he was known by the nick-name "Skinny" because of his physical appearance and his idiosyncrasies remain legend in the folklore of Wake Forest. In 1933 he married Sarah Cullom, the daughter of religion professor W. R. Cullom, and they had one daughter, Virginia Chilton. Pearson retired as head of the Department of Social Sciences in 1952 and continued his research and activities on campus until his death in the town of Wake Forest.