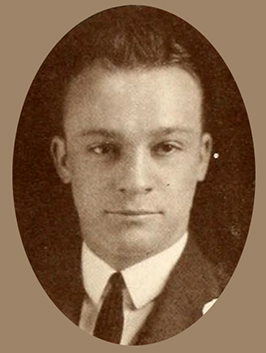 Wilbur Joseph Cash, journalist and author, was born in Gaffney, S.C., of Ulster Scot and German ancestry, the oldest of three boys and one girl. His father, John William Cash, managed the company store of Limestone Mills; his mother, Nannie Lutitia Hamrick, had taught music in the public schools. First named Joseph Wilbur, Cash reversed the order of his names and commonly used only the initials. Schoolmates called him "Sleepy," and to newspaper friends he was "Jack." He attended the public schools of Gaffney until 1912, when his father moved to nearby Boiling Springs, N.C., to enter partnership in a general store with Wilbur's maternal grandfather, an upcountry Republican and first mayor of the town. Cash entered Boiling Springs High School (later Gardner-Webb College), a Baptist academy, where in April 1917 he gave the commencement address. During summers he worked on his grandfather's nearby farm.

During 1917–18, Cash worked at odd jobs in shipyards and cantonments from Maryland to Florida, mainly at Camp Wadsworth near Spartanburg, S.C., where his father organized a fleet of cars to transport soldiers. In 1918–19, at his father's urging, he attended Wofford College, but he disliked what seemed to him the narrow provincialism of the Methodist school (his reaction was in part a rebellion against a strict Baptist upbringing). In 1919 he went to Valparaiso University in northern Indiana, but dropped out at Christmastime. Early in 1920 he acceded to his father's wishes and entered Wake Forest College, despite misgivings about another "preacher college."

The college was supported by North Carolina Baptists but headed by Dr. William Louis Poteat, a biologist whose acceptance of Darwinian evolution made him the target of fundamentalist attacks. At Wake Forest, Cash awakened to new ideas, affected a bohemian style, and became a campus iconoclast. He read H. L. Mencken and copied his style in the student paper, the Old Gold and Black, which he served as associate editor in his senior year. He delighted in baiting the state Baptist organ, the Biblical Recorder, on such diverse issues as evolution and social dancing. During summers he helped out at a hosiery mill, of which his father had become superintendent. Graduated with an A.B. in 1922, he spent one year in the Wake Forest Law School but decided against legal practice; he taught English at Georgetown College in Kentucky for two years and at the Hendersonville School for Boys for one year and then decided to take up journalism.

Having worked as a student journalist and, in the summer of 1923, as reporter for the Charlotte Observer, he first took a job with the Chicago Post but soon returned to North Carolina as reporter for the Charlotte News. In the summer of 1927, threatened with a nervous collapse, he left for a bicycle tour through England, France, Italy, Switzerland, Germany, and Belgium. He returned to Boiling Springs for a stint as editor of the semiweekly Cleveland Press in nearby Shelby. During the campaign of 1928 his editorials attacked anti-Catholic prejudice against Al Smith. In 1929 he retired to Boiling Springs with the notion of making his way as a free-lance writer. His first magazine pieces appeared in Mencken's American Mercury the same year: "Jehovah of the Tar Heels," a blast at Senator Furnifold M. Simmons, in July, and in October, "The Mind of the South," an idea that had incubated in his mind since, as an undergraduate, he had heard Professor C. C. Pearson discourse on "the Mind of Virginia" and "The Mind of North Carolina."

The second article caught the eye of Blanche Knopf, wife of New York publisher Alfred A. Knopf, who invited Cash to submit a plan or manuscript for a book. In March 1930, with the encouragement of Chapel Hill sociologist Howard W. Odum, Cash sent Mrs. Knopf the sketch of a book to be called The Mind of the South. Soon afterward, however, a physical collapse forced him to enter a Charlotte hospital for several months, after which doctors ordered him to quit writing and study and to get exercise in outdoor activity. For two years he did little serious writing, but in 1932 he went to work on the book in a back room of the Boiling Springs post office, where his aunt was postmistress. In that unheated room he continued to free-lance for various outlets and worked on his book with the agonized persistence of a perfectionist. He threw away more pages than he kept but persevered in the face of poor health, poverty, and monumental writing blocks.

In 1937, Cash's father's hosiery mill ran afoul of the business recession. John Cash got a job as a traveling shoe salesman, and W. J. returned to the Charlotte News as a full-time editorialist. He got the assignment to cover foreign affairs, a form of editorial "Afghanistanism" to keep him away from strictures on right thinking and the local powers. He had more latitude on the book page, where few but the local intelligentsia noticed his weekly column. In time snatched from his newspaper work, Cash brought his book to completion in July 1940. In February 1941, Knopf published The Mind of the South.

Cash and his fiancée, Mrs. Mary Ross Northrup, had agreed to postpone marriage until he finished the book. On Chrismas Day 1940 they were married by a justice of the peace in York, S.C. On 30 May 1941, with a Guggenheim Fellowship in hand, the Cashes left for Mexico City, where he planned to write the fictional saga of a southern industrial community. It was his cherished ambition to write a novel, and over the years he had made false starts on several. Along the way he stopped to give the commencement address at the University of Texas—his new fame had brought the invitation. In Mexico City, however, the combination of fatigue, altitude, and climate made him ill. On 30 June he suddenly became obsessed with delusions that Nazi agents were plotting to murder him in revenge for his editorials. The following day he fled alone and took a room at the Hotel Reforma, where he was found dead that night, hanged by his necktie from the bathroom door.

The cause of his death cannot be resolved with certainty. Evidence of Nazi agents is nonexistent, and an autopsy failed to reveal a brain tumor, reports of which were invented to spare mourners additional pain. Cash had a long personal history of neuroses, depression, fears of impotence, and endocrine disorders, but his biographer Joseph L. Morrison decided that these had at most a secondary importance. The most likely explanation was a suicidal fit resulting from an "acute brain syndrome," an affliction caused by unknown toxins in the system. Cash's remains were cremated, brought back by his widow for a funeral service at Shelby's First Baptist Church, and later interred in a vault in Sunset Cemetery.

Cash's reputation rests on his magnum opus, a brilliant masterpiece that transcended the limitations of his own and the historian's craft. The product of exhaustive reading, perceptive observation, and creative insight, The Mind of the South is by common consent a classic work of history and social criticism. Two major themes dominate the book: the uniformity of the southern mind and its continuity. Class conflict in Cash's view, was limited by the "proto-Dorian bond" by which the common white (like the Doric knight of Sparta) was elevated to the dominant class through the "vastly ego-warming and ego-expanding distinction between the white man and the black." While there were in truth many Souths, the "man at the center" was the back country yeoman farmer of the Old South and his descendants, the people from whom Cash himself sprang. The book challenged both the shopworn cavalier myth of the Old South and the legend of a progressive and modernized South. The region was like "a tree with many age rings, with its limbs and trunk bent and twisted by all the winds of the years, but with its tap root still in the Old South."

Cash explored many tenacious paradoxes—the juxtaposition of class unity and class exploitation, individualism and the "savage ideal" of conformity, fundamentalist morality and the "hell-of-a-fellow complex"—and the complicated interrelationship of these with race, romanticism, rhetoric, leisure, the cult of womanhood (the "lily-pure maid of Astolat"), the rape complex, violence, paternalism, demagoguery, and suspicion of outsiders.

The changing South of 1940 was the South still, at its best "Proud, brave, honorable by its lights, courteous, personally generous, loyal, swift to act, often too swift." But its special vices remained: "Violence, intolerance, aversion and suspicion toward new ideas, an incapacity for analysis . . . an exaggerated individualism and too narrow concept of social responsibility, attachment to fictions and false values, above all a too great attachment to racial values and a tendency to justify cruelty and injustice in the name of those values." The book ended on a note of pessimism. Soon the South would "have to prove its capacity for adjustment far beyond what has been true in the past." The "tragedy of the South as it stood in 1940" was the lack of "articulation between the new intellectual leaders and the body of the South."

The book was well received by reviewers, the only adverse notices being written by two of the Nashville Agrarian group whom Cash had severely criticized. Certain reservations, however, have been expressed in retrospect, most notably by C. Vann Woodward. The treatment of Reconstruction was untouched by the nascent revisionism of the time. The book was a study of "temperament" rather than "mind" and neglected southern intellectuals. It paid little attention to the mind of the black South or to many of the white dissenters—antislavery advocates, Unionists, Republicans, Readjusters, Populists, the peace advocates of World War I. And it was rooted in the Appalachian foothills with which Cash was most familiar, giving "an unbiased history of the South from the hillbilly point of view." Still, it would be difficult to challenge Joseph L. Morrison's judgment of The Mind of the South : "During this second half of the twentieth century, it has been accepted by virtually everyone that studies of the South—and by extension, of the Negro revolution—must begin where Cash left off."