North Carolina's mild climate and varied landscape have helped make golf an extremely popular and profitable sport in North Carolina. Early forms of golf were played in colonial North Carolina, but the modern game dates from the 1890s. It was during that decade that a number of golf courses were constructed in the state, including the Asheville Country Club, Fayetteville's Highland Country Club, and the Hot Springs Country Club in Madison County. There is little doubt, however, that the most important golf course construction in the state took place in the Sandhills community of Pinehurst, where, beginning in 1895, James Walker Tufts, a retired Massachusetts businessman, created one of America's premier golfing resorts. Pinehurst's famous Number Two course is the best-known course in the state and is regarded as one of the world's finest. It and several other North Carolina courses were designed by Donald J. Ross, a native Scotsman who settled in Pinehurst around 1898. 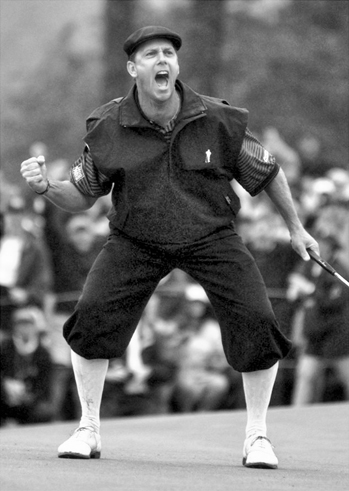 Golf courses outside of Pinehurst that have received national acclaim include the Grandfather Mountain Golf Club in Linville, the Quail Hollow course in Charlotte, Tanglewood Golf Park in Clemmons, and Forest Oaks Country Club in Greensboro. Golf initially was an upper-class pastime, but this began to change after World War II, when leisure time and recreational opportunities expanded. President Dwight D. Eisenhower's highly publicized golf outings gave the sport a boost in the 1950s, as did the charisma of dynamic champion and Wake Forest graduate Arnold Palmer. The sport has become wildly popular with a broad cross section of the sporting public.

North Carolina has hosted many professional and amateur tournaments. The Greater Greensboro Open was first held in 1938, making it one of the oldest tournaments on the Professional Golfers Association (PGA) tour. Over the years Pinehurst, Charlotte, Durham, Asheville, Raleigh, Winston-Salem, and Wilmington have all hosted PGA tournaments. The North and South Amateur has been held at Pinehurst since 1900. Golf was one of the first sports in which women competed seriously, and women's tournaments have been held in the state since the turn of the century. Raleigh, High Point, Greensboro, and other cities have all hosted tournaments of the Ladies' Professional Golfers Association tour.

Perhaps the most successful North Carolinian on the PGA tour has been Fayetteville native Raymond Floyd. His 62 professional victories include the 1986 U.S. Open, the 1976 Masters, and the 1969 and 1982 PGA titles. Badin's Johnny Palmer, Charlotte's Clayton Heafner, and Durham's Stewart "Skip" Alexander enjoyed success on the PGA tour in the 1940s and 1950s. More recent standouts include Chip Beck (Fayetteville), Joe Inman (Greensboro), and Scott Hoch (Raleigh). Charlotte native Charlie Sifford overcame years of racial prejudice to become the first African American to win on the PGA tour. Tarboro's Harvie Ward, High Point's Dale Morey, and Morganton's Billy Joe Patton were outstanding amateurs in the 1950s. Chapel Hill's Estelle Lawson Page was a standout amateur player in the 1930s and 1940s. Greensboro's Marge Burns succeeded her as North Carolina's top female amateur, and High Point's Kathy Johnston was a standout at UNC before becoming a professional in the early 1990s.

Most North Carolina colleges and many high schools have golf teams. Wake Forest University has been extremely successful in men's college golf. Besides being Arnold Palmer's alma mater, the school, under coach Jesse Haddock, won the 1974, 1975, and 1986 National Collegiate Athletic Association (NCAA) titles. Haddock's program included such notable future PGAstandouts as Curtis Strange and Lanny Wadkins. Duke University's Art Wall and Mike Souchak in the 1950s and the University of North Carolina's Davis Love III in the 1990s all have had considerable success on the PGA tour.

Beginning in the early 1990s, North Carolina underwent a golfing boom that pushed the number of courses in the state to well over the 400 mark. Many residential developments and resorts have been built around golf courses, and the sport has become a major source of tourist income.

Richard S. Tufts, The Scottish Invasion, Being a Brief Review of American Golf in Relation to Pinehurst and the Sixty-second National Amateur (1962).

On the other side of the

On the other side of the spectrum with the least popular events among Squirt.org members were handball at just seven percent watching, followed by badminton at 10 percent, then table tennis, golf and modern pentathlon.

Do you have any information on a match at Highland Country Club, Fayetteville, NC including Arnold Palmer and Hobart Manley, Jr.?

Do you have any information on a match at Highland Country Club, Fayetteville, NC including Arnold Palmer and Hobart Manley, Jr.?

Thanks for visiting NCpedia and sharing this question. NCpedia does have an article on Arnold Palmer, but no information about a match in North Carolina with both Palmer and Hobart Manley.

You may want to contact the country club to ask about their tournament history. They may be able to answer that quickly!

Also -- here are the results of an internet search for Palmer and Manley: https://www.google.com/webhp?sourceid=chrome-instant&ion=1&espv=2&ie=UTF.... You might find something useful there as well.