Hiram Voss Paul, poet, author, editor, and journalist, was born in New Bern of Scotch-Irish ancestry. His forefathers, the McCotters and the Pauls, were among the first settlers of Albemarle County in 1663. 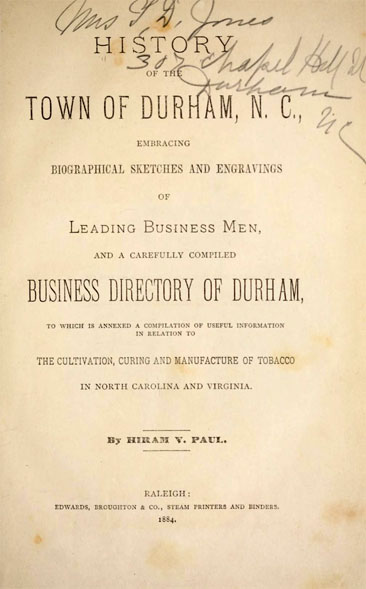 The son of a Baptist pastor in New Bern, the Reverend Hiram Voss Paul, he attended New Bern Academy and Lenoir Institute. His mother died in 1864 and his father in 1865. Although his father had intended for him to be a minister and had already made provisions with Braxton Craven for him to enter Trinity College, his guardian took little interest in his education and revoked the Craven contract. Paul was instead apprenticed to John Spellman, a printer and the editor and proprietor of the New Berne Commercial. He did, however, start studying theology with the Reverend Edward M. Forbes, D.D., rector of Christ Church, New Bern, in 1869. The same year, a volume of his poems was published in New Bern.

In 1871 Paul went to visit his uncle in New York City and stayed for three years. While there, he worked for the business firms of Lang, Little, and Hillman and Moses Dow and established a journal, entitled Evolutionist, that was devoted to the Evangelical Temperance Alliance. His journal offices were destroyed by fire in the latter part of 1872. During this period, one of his poems, "Alone," fell into the hands of Mrs. Sarah Josepha Hale, who had it published in Waverly Magazine. Soon his poems, sketches, and stories were appearing in what his biographer, the Reverend James Dike, called "some of the best magazines and journals." At this time, he also resumed his theological studies with the Reverend Charles F. Deems.

After traveling much from 1872 to 1877, Paul returned to North Carolina and pursued a career as a journalist. During the next few years, he was editor of the Daily Evening Dispatch in Raleigh, the Evening Post, probably also in Raleigh, and the North Carolina Prohibitionist. The mission of the Dispatch was the vindication of the interests of North Carolina against foreign railroad syndicates and the paper was an inveterate opponent of the sale of the state's interest in the Western North Carolina Railroad. The paper's owners, although originally against the sale, changed their minds, putting them at odds with Paul, and they did not renew his contract. He then turned to editing the Evening Post with Major William Hearne. The Post was a Democratic paper devoted largely to promoting the candidacies of Daniel G. Fowle and Julian S. Carr for governor and lieutenant governor respectively.

In the early 1880s Paul founded the Durham Workman, a newspaper that served as an organ for the Knights of Labor. Generally considered Durham's first historian, Paul was the author of History of the Town of Durham: Embracing Biographical Sketches and Engravings of the Leading Business Men of Durham, published in 1884 by Edwards and Broughton Company. The book included a business directory of Durham plus an appendix of information on the cultivation, curing, and manufacturing of tobacco in North Carolina. J. Dike wrote a biography of Paul for the volume.

Later years found Paul still living in Durham and working for a Mrs. B. Davis, a dealer in clothing, shoes, and dry goods at 117 West Main Street. In September 1899 Paul, who was facing great personal and financial hardship, wrote a letter to Washington Duke asking him to arrange for Paul's daughter, Anne, to enter a musical conservatory. He told Duke, in the letter dated 12 September, that the sicknesses and deaths of his wife, son, and brother had left him so in debt that he had had to stop his daughter's musical training. Though he gave his assurance that he would pay her tuition as soon as he was out of debt, Duke refused Paul the favor. Obviously upset, Paul told Duke that he was "leaving him with his conscience and his God."

Hiram Voss Paul, History of the Town of Durham: Embracing Biographical Sketches and Engravings of the Leading Business Men of Durham (1884).

Paul, Hiram Voss, b. 1848; Dike, James, b. 1848. History of the town of Durham, N. C., embracing biographical sketches and engravings of leading business men, and a carefully compiled business directory of Durham, to which is annexed a compilation of useful information in relation to the cultivation, curing and manufacture of tobacco in North Carolina and Virginia, by Hiram V. Paul. Raleigh, Edwards, Broughton & co., printers. 1884. https://archive.org/stream/historyoftownofd00paul#page/n16/mode/1up (accessed March 8, 2013).