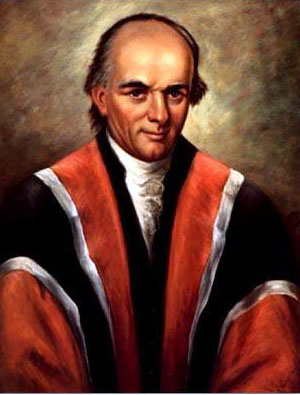 Alfred Moore, lawyer, rice planter, Revolutionary soldier, legislator, attorney general, superior court judge, and associate justice of the U.S. Supreme Court, was born in New Hanover County, the son of Anne Grange and Maurice Moore, a superior court judge. Descended from one of the most distinguished families of the Lower Cape Fear, he was the grandson of Colonel Maurice Moore, principal leader in the migration of the aristocratic Goose Creek planters of the Charles Town area to the Cape Fear in the mid-1720s and founder of Brunswick town in 1726. Alfred was the grandnephew of "King Roger" Moore, lordly proprietor of Orton plantation and the largest slaveholder (with 250 slaves) in colonial North Carolina. His father was one of the colony's ablest judges and a forceful spokesman for colonists' rights against the oppressive British measures of the 1760s. Maurice Moore's spirited challenge to the constitutionality of the Stamp Act and intemperate conduct in preventing its enforcement led to his removal as judge by Governor William Tryon; he was vindicated, however, when the home government in London ordered his reinstatement in 1768. He held the position when the celebrated letter, bearing the signature of "Atticus" and directed to Governor Tryon as he was leaving North Carolina in 1771 to become governor of New York, was penned and attributed to Moore.

Having been educated himself in New England, the judge sent Alfred to Boston for schooling at the early age of nine (probably because of Moore's recent remarriage following the death of Alfred's mother). After several years of study, Alfred returned home before the Revolution, read law in his father's office, and was admitted to the bar in April 1775. Soon afterwards he married Susanne Elizabeth Eagles of Brunswick County, and they had several children.

On 1 Sept. 1775 he was made a captain in the First North Carolina Continental Regiment, commanded by his uncle, James Moore. Alfred saw military action first against the Scottish Highlanders at Moore's Creek Bridge in February 1776 and later against the British forces in the June 1776 defense of Charles Town. He resigned from the army on 8 Mar. 1777, after the death of Judge Moore (ironically, Maurice and James Moore died in the same house on the same day, 15 Jan. 1777), to care for his father's family. Returning to his plantation, Buchoi, in Brunswick County, he resumed the practice of law and engaged in rice planting. While no longer a regular soldier, he became active as a colonel of militia and was very effective in harassing the British forces under Major James Craig, who captured Wilmington in January 1781 as a supply base for Lord Cornwallis's army to the west. Craig retaliated by sending a detachment to Buchoi, where it plundered Moore's house, burned the outbuilding, and carried off the stock and slaves. Craig's attempts to kill or capture Moore failed, and his offer to restore Moore's property and give him amnesty if he would return to the plantation and forego any further military action was spurned by Moore. Although the war left his plantation in disarray and his personal fortune considerably diminished, the immediate postwar period brought rather rapid recovery; by 1790 he owned forty-eight slaves. 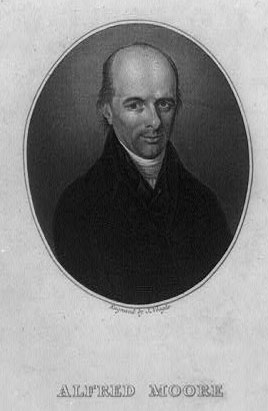 In 1782 Moore began his lengthy career as a public servant, first as state senator from Brunswick County. Later in the year, following the resignation of James Iredell, the General Assembly appointed him attorney general of North Carolina. Moore served with distinction for the next eight years. Displeased over the Court Act of 1790, which created the office of solicitor general with the same power and pay as the attorney general, and believing he could not satisfactorily conduct the state's legal work without injuring his private business or his health, Moore resigned as attorney general on 9 Jan. 1791 and retired to Buchoi.

His retirement was short-lived, for in 1792 Moore represented Brunswick County, as a Federalist, in the Assembly and in 1795 he engaged Timothy Bloodworth, a Republican from New Hanover County, in a lively contest for election to the U.S. Senate; Moore lost by one vote. In 1798 the Assembly elected him judge of the superior court. In October 1799, after the death of James Iredell, George Washington's appointee to the U.S. Supreme Court from North Carolina, President John Adams, in recognition of Moore's legal eminence (which only William R. Davie shared before the state's bar), appointed him to replace Iredell. Iredell and Moore were the only North Carolinians ever to serve on the nation's highest bench. Although Moore remained on the Court for five years, he delivered an opinion in only one case, Bas v. Tingy (4 Dallas 37, 1800), in which he stated that a "limited, partial" war existed with France, a position supported by the other judges.

Recognition of Moore's mature judgment was also evidenced by his appointment to various delegations or commissions over the years. In 1786 he was appointed by the governor as a delegate to the Annapolis convention, called to determine whether the Articles of Confederation needed to be amended; however, he, along with the other North Carolinians, did not attend. Later, in 1798, President Adams designated him as one of three commissioners to make a treaty with the Cherokee; Moore withdrew from the negotiations before the treaty was signed on 2 October. Ever a public-spirited citizen, he tended to support any worthy cause, such as the formation of the state university—he was one of the original trustees (1789–1807) and contributed sizably to its support.

Always of frail physique, Moore was forced by increasing ill health to retire from the Supreme Court in 1804, thus ending his long and fruitful career. He died and was buried with full military honors at Belfont, the plantation of his son-in-law, Major Hugh Waddell, in Bladen County. Later his remains were moved to the churchyard of St. Philips at Brunswick town. Perhaps Samuel A. Ashe summed up the role of Moore best: "Taking him all in all, he was one of the most masterful men who have adorned the annals of North Carolina."

Davis, Junius. Alfred Moore and James Iredell, revolutionary patriots, and associate justices of the Supreme Court of the United States. An address delivered in presenting their portraits to the Supreme Court of North Carolina on behalf of the North Carolina Society of the Sons of the Revolution. [Raleigh : The Society]. 1899. https://archive.org/details/alfredmoorejames00davi (accessed May 8, 2013).