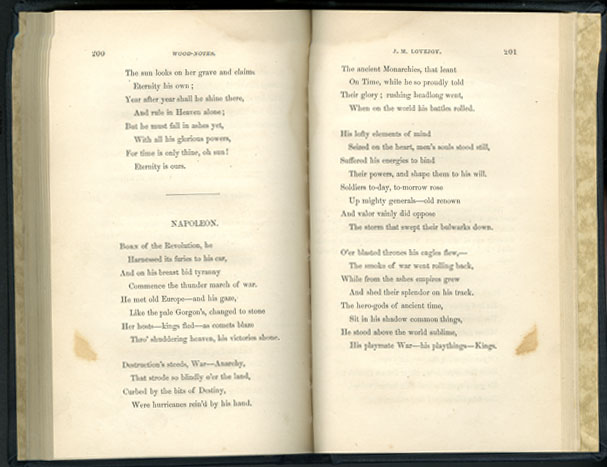 Jefferson Marshall [Madison?] Lovejoy, educator, was born in Sharon, Vt., the youngest son of the Reverend Daniel and Elizabeth Pattee Lovejoy. His older brothers were Elijah Parrish and Owen. Jefferson Lovejoy studied at Middlebury College for three years (1832–35). When he journeyed south to take charge of the Pittsborough Academy in 1838, he was described as "a first-rate mathematician and linguist." He reserved his enthusiasm for Greek and Latin.

In January 1842 Lovejoy "opened a classical and English school, on Burke Square" (later the site of the Executive Mansion) in Raleigh, known as the Raleigh Male Academy or simply the Lovejoy Academy, where he lived on the second floor of a Spartan two-story house with classrooms on the ground level. His technique was to hear "lessons out of a book with corrections of wrong answers," and he punished recalcitrant students by striking the palms of their hands with a short stick. "Old Jeff" knew his textbooks so well that he rarely used them during recitations. In spite of his sternness, his students never knew him to be unfair and were proud to call themselves "Lovejoy Boys."

In 1848 he was nominated for a professorship in Latin at The University of North Carolina but was not offered the position. He wrote poems from time to time, and Mary Bayard Clarke's Wood-Notes (1854) includes his twenty-five-page reminiscence, "A Day on the Hills," and two shorter selections. His uncollected verses are scattered throughout the issues of the Raleigh North Carolina Standard, notable among them "The Fair" (28 Oct. 1854), an eighty-line panegyric on the glories of North Carolina.

In 1861 Lovejoy became a loyal Secessionist and in April wrote his son George S., then at West Point, to come home. He added military instruction to the curriculum of his school and joined the local Home Guard. Two of his sons were killed in the war.

On 22 June 1877 Lovejoy was stricken with apoplexy. His funeral at Christ Church, Raleigh, was "largely attended, and all classes of our citizens," wrote a newspaper editor, "were represented in the line of march to the cemetery. His boys, as he always called them, the pupils of his school formed a line of procession to themselves, and at the conclusion of the burial service performed the honors of covering up the remains."