Theophilus Hunter Hill, poet and librarian, was born near Raleigh at Spring Hill plantation in the home of his maternal grandfather, Theophilus Hunter, Jr. His great-grandfather was the Reverend William Hill, a chaplain in the American 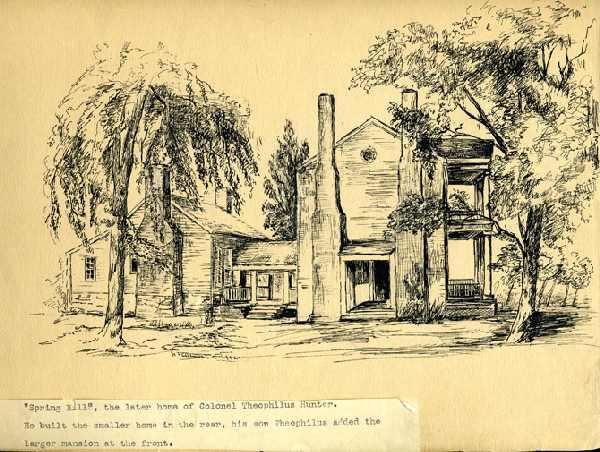 Revolution; his grandfather, also William Hill, was North Carolina's secretary of state for more than forty years; and his father, Dr. William G. Hill, was an eminent physician. His maternal great-grandfather was Theophilus Hunter, pioneer Wake County settler. Hill's mother, Adelaide, was the daughter of Theophilus Hunter, Jr. Young Hill received his early training from an aunt, Eliza Hill, who later conducted a private school in Raleigh. He then attended the Raleigh Male Academy while it was under the direction of J. M. Lovejoy. In 1852 he entered The University of North Carolina but because of family financial reverses was obliged to complete his studies at home.

In 1853 Hill became editor of a Raleigh newspaper, The Spirit of the Age. At the time he was encouraged by Judge Daniel Fowle, who later became governor, to take up the study of law. Having read law under Fowle, Hill was licensed in 1858, but because he did not care for the law he never opened a practice, preferring instead a literary life. In Raleigh in 1861 his first volume of poems, Hesper and Other Poems, became the first book published under the copyright laws of the Confederate States. His second volume, Poems, was published in New York in 1869, and his final volume, Passion Flower, was published in Raleigh in 1883. Other poems appeared in newspapers and periodicals.

From 1871 to 1873 Hill served as state librarian until he became editor of The Century, published in South Carolina although he remained in Raleigh. He also represented several book concerns and insurance companies. Hill was a lifelong Democrat and kept fully informed on political issues, but he never ran for public office.

His first wife, whom he married on 22 Jan. 1861, was Laura Phillips of Northampton County; she died in 1878. Their children were Theophilus Hunter, Frank E., and Rosa. In September 1879 he married Mattie Yancey of Warren County, and they had one child, Tempe. She painted a portrait of her father for the State Library. Hill died of a fever in Raleigh at age sixty-four. He was buried in Oakwood Cemetery.