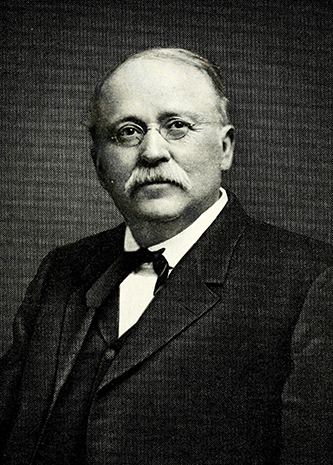 Jacob Alson Long, attorney and Ku Klux Klan leader, was born at the old Long home place near Graham, the son of Jacob and Jane Stuart Stockard Long. His grandfather, John Stockard, served in the War of 1812 and represented Orange County in the General Assembly almost continuously from 1826 to 1846. Young Long attended Alexander Wilson's school near Graham and an academy at Hyco, Va., but left school in 1864 to join the Army of Northern Virginia; he served as a gunner until General Robert E. Lee's surrender at Appomattox. After the war he spent four years on the family farm and in school before studying law in Hillsborough under William K. Ruffin, son of Chief Justice Thomas Ruffin.

Licensed to practice in 1870, Long established himself as an attorney in Graham for two years. Afterwards he was a railroad conductor for a year and taught school for another year before moving to Yanceyville, where he practiced law for a decade. For three years he was an attorney in Durham but then returned to Graham, where he remained for the rest of his life. For a time he was in partnership with his son, J. Elmer Long, who was lieutenant governor from 1925 to 1929.

In 1868, when the Ku Klux Klan was introduced into Alamance County from Guilford County, Long was named chief of Camp Number One. He soon organized ten camps to which the leading citizens of Alamance and Caswell counties belonged. Their stated objective was to keep law and order; reportedly, Long's only order as chief was to get armed blacks off the streets of Graham. Eventually, federal authorities learned about the Klan's activities through James E. Boyd, a former member. As a result, Long left Graham and went to Arkansas. After six months, however, he returned and resumed his law practice. Within a short time, he was arrested and charged with being an accessory to the murder of Wyatt Outlaw, a black, who had been hanged near the courthouse in Graham on 26 Feb. 1870. While appearing as attorney in another case, Long was required to post a daily bond of ten thousand dollars. When told that he would be exonerated of all charges if he would reveal the names of others involved with the Klan, he refused. On 20 Dec. 1871, while under arrest but free on bond, Long married Esta Teague. Two days later all charges against him were dismissed.

In 1886 Long was nominated by the Democratic party for solicitor of the Fifth District, but he was defeated by the Republican candidate. In 1893 he was his party's candidate for the General Assembly and was elected, serving a single term.