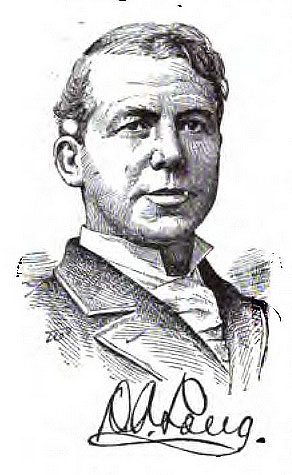 Daniel Albright Long, clergyman and educator, was born in Graham, the son of Jacob and Jane Stuart Stockard Long. He had a sister, Bettie, and five brothers: John, William Samuel, Jacob A., George W., and Benjamin F. After attending Graham Institute, Long, then sixteen, began teaching school in Alamance County but interrupted his career to serve in the Confederate army. After the war, he attended The University of North Carolina from 1866 until 1868 and was ordained a minister in the North Carolina and Virginia Conference of the Christian church, South, in 1867. For several years he both served churches and taught school in Rockingham County, Va., while continuing his studies at Yale University, the University of Virginia, and the University of Pennsylvania.

In 1874 Long returned to his native Graham and purchased the Graham Institute property from his brother, William Samuel Long. On 3 Mar. 1875 the Graham High School was incorporated with Daniel Albright Long as principal; in 1881, by another charter, the name of the institution was changed to Graham Normal College, with Long as president. One of its students was the English-born David F. Jones, who expressed a desire to become a Christian minister and enter the foreign mission field. It was largely due to Long's efforts on his behalf that Jones and his wife sailed for Japan in 1887, becoming the first missionaries in the Orient dispatched by the American Christian church. In 1883 Long accepted the presidency of Antioch College, an institution founded by the northern Christian church at Yellow Springs, Ohio. Reportedly, he was the only Confederate veteran ever elected to the presidency of a college above the Mason-Dixon Line. He turned the operation of Graham College over to his brother, William Samuel Long, and moved to Ohio. Antioch had opened with insufficient funds and suffered financial privations throughout its existence. The president labored valiantly but was unable to raise the necessary funds from the Christian church to place the college on a sound financial basis. He resigned in 1899, and the school eventually became the property of the Unitarian church; it is still in operation today.

From 1877 to 1887 Long served as a trustee of The University of North Carolina, which awarded him an honorary M.A. degree in 1882 and an honorary D.D. degree in 1887. In the latter year he received an LL.D. degree from Union Christian College, and in 1893 he was made a fellow of Columbia University. From 1886 to 1894 Long served as president of the U.S. Christian Conference, which was the governing body of the Christian church in the North and the West. During his tenure, he was influential in effecting a reconciliation between the conference and the southern Christian church, which had severed relations in the 1850s as a result of a disagreement over the slavery issue. This led to the formation of one denomination in 1922 known as the Christian church. (Due to mergers, this church became the Congregational Christian church and, later, the United Church of Christ.)

In 1890 Antioch College began publishing Spirit and Life: A Christian Magazine. Long edited the second volume of the paper, after which its publication was suspended. He also edited the Yellow Springs Review. In 1893 he became president of the reorganized Christian Publishing Association, at Dayton, Ohio, and served for eight years.

Long was pastor of the Hillsboro Street Christian Church in Raleigh, N.C., before accepting the presidency of Union Christian College, at Merom, Ind., in 1911. After serving in this capacity for a number of years, he returned to North Carolina and assisted in the operation of Franklinton Christian College. This institution constituted the initial effort of the Christian church to educate the blacks in the state, and it was maintained largely through the support of Long and other clergymen. Long held numerous other minor offices in his denomination until advanced age forced his retirement. He was the author of Legal History of Antioch College (1890) and Jefferson Davis: An Address Delivered at Concord, N.C., June 3, 1921 (1923). One of his sermons was published in Gospel Sermons of Christian Ministers (1890), edited by Asa W. Coan.

Long's first wife was Ava R. Waters, who died in 1874. His second wife, and the mother of his five children, was Carrie Eugenia Bell. After her death in 1893, he married Mrs. A. B. Beech (Sadie S.), who died in 1907. His fourth wife was Mrs. Robert Easley (Lula Price), who survived him. His children were Margaret (Mrs. D. K. Wolfe), Carrie (Mrs. Charles H. Belvin), Lillian (Mrs. George Albert Kernodle), Joseph C., and Daniel Albright, Jr.

Long was a Mason, a member of the Sons of the American Revolution, and a recipient of the Southern Cross of Honor. He died in Graham and was buried in Linwood Cemetery. Numerous photographs, taken at various times during his life, appear in various issues of the Christian Sun.

Laws and Resolutions of the State of North Carolina Passed by the General Assembly at Its Session of 1881.