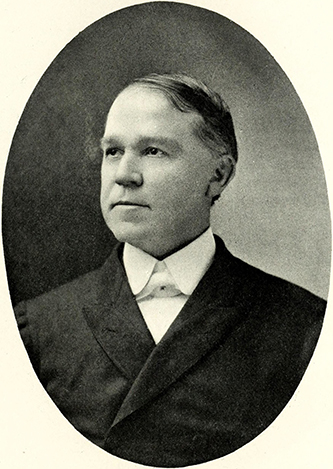 William Samuel Long, clergyman and educator, was born in Graham, the son of Jacob and Jane Stuart Stockard Long and the great-grandson of Conrad Long, who immigrated to America from Germany. He had a sister, Bettie, and five brothers: John, Jacob A., George W., Benjamin F., and Daniel Albright. William Samuel Long was ordained into the ministry of the southern Christian church shortly before the Civil War. From 1861 to 1865, he engaged in ministerial work and taught school in Halifax County, Va.

Returning to Graham in 1865, Long purchased the property of the old Graham Institute and opened a school. In 1874 his brother, Daniel Albright Long, bought the property from him and incorporated the school as Graham High School in 1875 and then as Graham Normal College in 1881. The school had a large enrollment; one student was Julius Foust, who later became president of the State Normal and Industrial School (now the University of North Carolina at Greensboro). The faculty was enlarged to include, besides the two Long brothers, C. W. Smedes, J. L. Scott, J. L. Foster, William Wesley Staley, John Urquhart Newman, Henry Jerome Stockard, Silas A. Holleman, and Mrs. James A. Graham. Stockard later became president of Peace Female Institute in Raleigh, Staley became president of Elon College, and both Newman and Holleman served for many years on Elon's faculty. In 1883 William Samuel Long took complete charge of the college when his brother Daniel went to Ohio to become president of Antioch College.

In 1887 the General Convention of the Christian church, South, leased Graham Normal College and Long accepted the denomination's challenging offer to build a new college for the church and become its first president. After considerable negotiations, a site along the railroad a few miles west of Burlington and Graham was selected and work began on Elon College, so named because it was located in an oak grove and Elon is the Hebrew word for oaks. Due to the indefatigable efforts of the president and his family, for Long often did the carpentry himself and used his own property to raise necessary funds, the college opened on 2 Sept. 1890. Just at this time the buildings of the college in Graham burned and the church abandoned its plans to operate the former college as a high school, but Elon College continued to grow and thrive. Long was a firm believer in coeducation, a policy of the college throughout its existence.

At the end of the academic year 1894, Long resigned the presidency of Elon to become superintendent of schools for Alamance County, serving until 1904. Remaining active in the affairs of his church, he was elected in 1879 to its higher office: president of the Southern Christian Convention. In addition, he held many minor offices in the denomination. In 1887 he was influential in the founding of a church, named Long's Chapel, several miles north of Haw River. From 1898 through 1905 Long served on a Southern Christian Convention committee that raised the money for and constructed the Christian Orphanage at Elon College, and for several years he served as a trustee of the orphanage.

Long married first Elizabeth Faucette, and the couple had four children: Elizabeth Jane, William Samuel, Jr., Edgar, and Benjamin F. After Elizabeth's death in 1902, he married Mary Virginia Gaskins Ames. There were no children of the second marriage. During his later years, Long often served as a visiting minister and church official. He died as the result of an automobile accident and was buried in Linwood Cemetery, Graham. In 1966 the William S. Long Student Center at Elon College was erected in his honor; in the lobby is an excellent portrait of the college's first president.

Minutes of the Faculty Meetings of Elon College .

Milo True Morrill, History of the Christian Denomination in America (1912).

Proceedings of the Southern Christian Convention, published in The Christian Annual (1890–1926).

"The Presidents of Elon." Office of the President. Elon University. http://www.elon.edu/e-web/administration/president/presidents_of_elon.xhtml (accessed September 18, 2013).