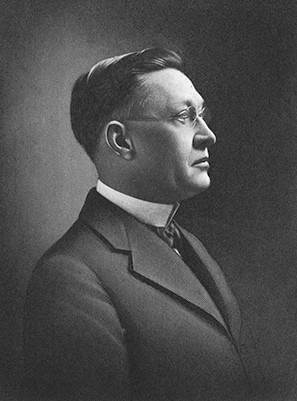 Julius Isaac Foust, teacher, school superintendent, and college president, was born in Graham, the son of Thomas Carby and Mary Robbins Foust. As a boy he worked on his father's farm and attended Graham Academy and later Graham Normal School (now Elon College). From 1885 to 1887 he was a student at The University of North Carolina after which he taught at Caldwell Institute in Orange County. He returned to the university in 1888 and received a Ph.B. degree in 1890. The following year he was principal of the Graded School for White Children in Goldsboro. He then was appointed superintendent of schools in Wilson, where he married Sallie Price and later had two children, Henry P. Foust and Mary Foust Armstrong; for the latter a residence hall is named at The University of North Carolina at Greensboro. From 1894 to 1902 he was superintendent of schools in Goldsboro and conducted teacher institutes.

In 1902, Foust went to the State Normal and Industrial School for Girls (now The University of North Carolina at Greensboro) as principal of the practice school and head of the department of pedagogy, a position vacated by P. P. Claxton. The following year he was made dean of the faculty, and upon the sudden death of Charles Duncan McIver he became acting president. In 1907, he was appointed president.

When Foust began his presidency, it was as head of a small normal school of 461 students. With improvements in curriculum and faculty it was accredited by the Southern Association of Schools and Colleges, and in 1919 its name was changed to North Carolina College for Women. Although teacher education was always important, the school placed heavy emphasis on the liberal arts. In 1931, when it became the Woman's College of the University of North Carolina, Foust was named a vice-president of the university and head of the Woman's College. Phi Beta Kappa recognized the standards of the college by establishing a chapter there in 1934, the year Foust retired. At that time there were 1,800 students.

Foust was noted for his ability to win financial support for the college. In 1906, the value of the physical plant was estimated to be $490,000; in 1930, it was appraised at $6,709,087. Over thirty buildings were erected during that period. To obtain additional property that came up for sale when the legislature was not in session, Foust persuaded the Alumnae Association to sign a $60,000 mortgage when there was less than $400 in the treasury. Subsequently the legislature purchased the property for the Curry Building. 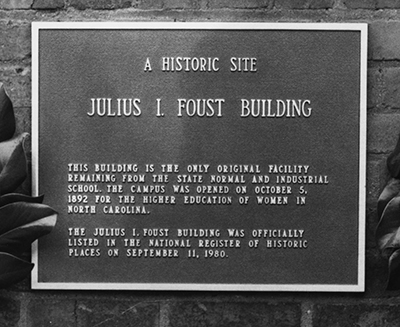 At a time when there was much controversy about the teaching of Darwinism, Foust supported academic freedom. In 1925 Dr. Albert Keister was accused of making an atheistic statement in a discussion following an extension class in Charlotte. Letters of protest came from church groups, parent-teacher organizations, alumnae, and other citizens. In his replies Foust defended the right of the individual to his own religious beliefs, and Keister remained at the college.

In 1932, after the death of his first wife, Foust married Clora McNeill of North Wilkesboro. He died in Lakeland, Fla., where he spent his winters after retirement, and was buried in Green Hill Cemetery, Greensboro.