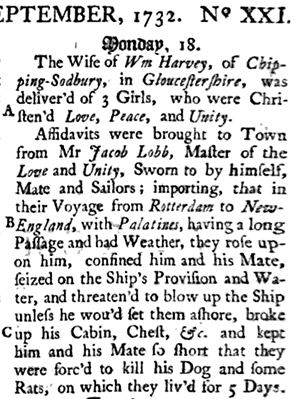 Jacob Lobb, English naval officer active in the Lower Cape Fear region during the Stamp Act crisis, may have been from Devon or Cornwall in south-western England, the home of several families of this name. (One William Lobbe in 1473 held Buckland Abbey.) In September 1732 it was reported that as master of the Love and Unity, engaged in a long and stormy passage transporting Palatines from Rotterdam to New England, Jacob Lobb and the mate of his ship were seized and confined without food for five days by some of the passengers who insisted on being put ashore immediately. On 9 Jan. 1748 Lobb became a lieutenant, and in 1748 he served on the Pansy, presumably a tender in the Mediterranean rather than a regular naval vessel. In 1756 he was sixth lieutenant of the Invincible and the next year was first lieutenant of the Royal George.

Promoted to the rank of commander on 23 Dec. 1757, in 1759 he was master and commander of the Swan sloop which sailed out of Sheerness, Kent, in January 1763. Before the end of the year, however, as a captain he was commander of the sloop Viper stationed off the coast of North Carolina "for the protection of our Trade." Among his concerns was the threat of pirates along the isolated Outer Banks, so one of his first acts was to prepare a pen-and-ink drawing of a good harbor along the coast from which passing ships might be observed. It was sent to the Lords of Admiralty, but the original is now in the Library of Congress. On the drawing Lobb wrote: "A Plan of the Harbour of Cape lookout Surveyed by His Majesty's Sloop Viper Captain Lobb in Sepr 1764 this Harbour is the best on the Coast of North Carolina being Landlock'd and sheltered from all Winds, and the going in attended with on [no?] difficulty in the Day or Night having no bar it Flows 7 hours full and change and the tide was observed to rise 5 feet and when the wind blows hard from the Eastward it will rise 7 feet. That Strangers may know this Harbour there is a Flag-staff erected by Captain Lobb about 50 feet high on a Sorel Hill near Davis's House and on Landlock Point a Port Which small Vessells may Moor too, they bear NE b[y] E from each other—Cape lookout is in the Lattd 34°-40" Variation 2°-40" East."

Lobb obviously lost no time in becoming familiar with his new station and reporting to his superiors at home. The Assembly of North Carolina recognized his usefulness to the colony shortly after his arrival, when it named him one of the commissioners of pilotage of the Cape Fear River. When William Tryon arrived with his family at the mouth of the Cape Fear River in North Carolina in October 1764 to assume his duties as lieutenant governor, he boarded the Viper 's barge for the trip upriver from Brunswick to Wilmington. Accompanied by Lobb, he was greeted by a seventeen-gun salute.

Lobb purchased a house in the town of Brunswick and his wife, Phillis, and their children apparently lived there. In June 1766 the house was acquired by Governor Tryon, and since Lobb's wife was privately examined concerning its sale and relinquished her dower right, it undoubtedly had been bought with her money.

An unfortunate incident occurred near the end of March 1765 between two members of Lobb's crew. Alexander Simpson, apparently a midshipman, challenged Lieutenant Thomas Whitehurst to a duel, reportedly over the affections of a woman. Each with a pair of pistols met in the woods not far from St. Philip's Church where shots were heard. On investigation, it was found that both men were struggling on the ground and Simpson was beating Whitehurst on the head with the butt of his pistol. Whitehurst's thigh already had been broken by a pistol shot. He lingered for six days and on 22 March, the day before his death, drew up his will by which he left some land in Stafford, England, to his sister and £50 to "William Grenfell Lobb," the youngest son of Captain Lobb. Simpson fled to Smith Island where he was concealed for a time by friends, but he later returned to Brunswick and was tried and convicted of manslaughter.

The most significant role Lobb played in North Carolina had its origin in the Stamp Act, passed by Parliament in March 1765 and scheduled to become effective on 1 November. The validity of this act to tax the colonies without their representation—a substantial contributor to the unifying of the colonies and the coming of the American Revolution—was widely discussed in all of the colonies. In North Carolina it was anticipated that stamped paper, which was to be used in printing certain documents, would arrive in Brunswick where Captain Lobb and the Viper were stationed. The people of the region forced the stamp agent to resign and prepared to resist the collection of the new tax. When the Diligence arrived on 28 November with stamped paper, men of the Lower Cape Fear refused to let it be taken ashore.

In mid-January two ships, the Dobbs from Philadelphia and the Patience from St. Christopher, arrived in the Cape Fear River without the required stamped clearance papers from their previous ports. Lobb seized both of these ships as well as the Ruby, which arrived a few days later. In retaliation, the merchants and residents of the town of Wilmington, a source of supplies a few miles up the river, refused to sell anything to sailors from the Viper sent there for supplies. An armed party of local men set out in search of Lobb and approached Governor Tryon, who had succeeded the late governor in that post. Tryon refused to say whether Lobb was in the governor's protective custody, but it soon was learned that the captain was aboard his ship.

Following a confrontation with them, Lobb wisely agreed that they were justified in seeking the release of the seized ships since there had been no stamped paper available when they sailed for North Carolina. Commenting on this action, the Virginia Gazette reported the remarks of Robin Jones, Jr., a North Carolina attorney: "Reason does not require the performance of impossibilities." Furthermore, Lobb permitted the seized ships to depart with their old papers even though stamped paper had arrived in North Carolina aboard the Diligence on 28 November. None of the stamped paper was ever landed in North Carolina and the small quantity that had arrived was returned to England after the repeal of the act in mid-March.

Correspondence between Lobb and Admiralty officials in London reveals that he remained on station in North Carolina for a time but also was elsewhere along the Atlantic coast as far as Halifax, Nova Scotia, where facilities existed for the repair of ships. On one occasion, after a hurricane along the North Carolina coast, he went to Halifax for this reason. In 1772 he was commander of the twenty-four-gun Fowey, which at various times served in North Carolina and Virginia waters; under a different commander it removed Lord Dunmore, the last royal governor of Virginia.

Lobb was the father of at least two sons. One, William Granville Lobb, became a lieutenant in the Royal Navy in 1777 and a captain in 1795. The May 1773 issue of the Gentleman's Magazine, published in London, reported the death of Captain Jacob Lobb "of his Majesty's sloop King Fisher, North Carolina." Mrs. Lobb in 1784 was living in Kentish Town, London.