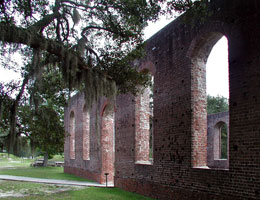 St. Philip's Church in Brunswick Town, which survives today as a ruin, was begun in 1754 and consecrated in 1768. It was the largest church in North Carolina at the time and among the finest in colonial America. Built of brick, the church was more than 76 feet long and 53 feet wide. Its walls, which still stand, were nearly 3 feet thick, and surviving portions stand more than 24 feet high. They once supported an arched wooden ceiling and a belfry above the roof. A large arched window and two smaller, rectangular chancel windows open the east wall. A massive arched door opened the west wall, and similar doors opened each of the side walls, along with pairs of arched windows.

Funding for construction of the church was provided by a 1745 act of the Assembly designed to encourage people to settle in Brunswick Town, which was then losing economic ground to the rival port of Wilmington. Construction was repeatedly interrupted, slowed by the tax burden of the war against the French and by the destruction of the roof by lightning in 1760. Governor Arthur Dobbs was buried within the church walls in 1765; his remains have not been located. St. Philip's Parish had been created out of St. James Parish in 1741 by an act of the General Assembly. The remains of St. Philip's Church are preserved as part of Brunswick Town State Historic Site. St. Philip's Church in Southport (erected in 1843) was ushered into the diocese as "Old St. Philips" in 1850 in memory of the original St. Philip's Church at Brunswick.