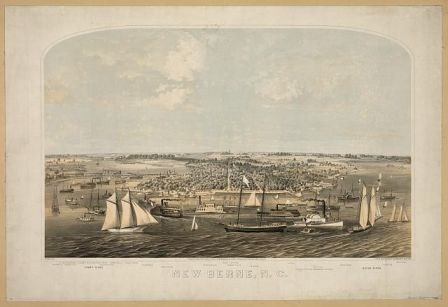 Emigrants from Bern, Switzerland, and the German Palatinate, led by a minor Swiss nobleman, Baron Christoph von Graffenried, are credited with establishing New Bern (North Carolina's second-oldest town) as well as being among the earliest settlers of Craven and Jones Counties. The Swiss were paupers whom the city government of Bern looked upon as undesirables and wished to remove from the area. The German Palatines, who were larger in number, were primarily residents from the Palatinate area located along the Rhine River. They had suffered from repeated wars, particularly the then-ongoing War of the Spanish Succession (1701-14), and an exceptionally harsh winter in 1708 that induced thousands to flee their homeland for better lives elsewhere. Many Palatines were lured by advertisements distributed by agents from Carolina and Pennsylvania who hoped to attract settlers to their still sparsely settled colonies. Others were influenced by the writings of a German pastor extolling the glories of the New World, which hinted that Queen Anne of England might grant passage to America to Palatines.

Queen Anne did in fact see her country as the protector of European Protestantism and looked favorably upon the idea of providing aid to the impoverished German emigrants, many, though not all, of whom were Protestants. Her intent coincided with the need of the Proprietors of Carolina and Pennsylvania for settlers. By 1709, as suffering increased in Germany, 1,000 refugees a week began making their way up the Rhine River and over to England. Within a short time, London was crowded with homeless refugees who lived in tents along the banks of the Thames River. Colonization was seen as one solution to the problem. 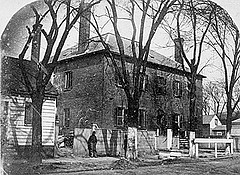 The idea of a settlement in Carolina was conceived by Georg Ritter and Company of Bern, which saw an American colony as as an opportunity to profit from mining ventures in the New World and financial grants from the Bernese and English governments for transporting the settlers to Carolina. The company purchased 10,000 acres between the Neuse and Cape Fear Rivers from the Carolina Proprietors, who offered the land at a low price. Graffenried himself purchased 5,000 acres and was given a title of nobility in the colony under the feudal system designated by the Fundamental Constitutions of Carolina. He also assumed direction of the entire project.

In January 1710 the Palatines sailed from Gravesend under John Lawson, surveyor general of Carolina, while Graffenried himself remained in England to await the Swiss. They endured an overly long voyage of 13 weeks, during which more than half of them died from close confinement, meager provisions, spoiled meat, and other hardships. Off the coast of Virginia, one of the ships, filled with supplies, was plundered by a French privateer. These misfortunes were followed by a fever epidemic when the Palatines reached land.

The survivors proceeded to the Chowan River, where they purchased supplies from planter Thomas Pollock, and then traveled through the sounds to the Neuse River. Lawson settled them at the fork of the Neuse and the Trent River. During the summer, almost all fell ill, and many sold their clothes to English settlers in the area in return for food.

When Graffenried arrived with the Swiss, he acted swiftly to relieve the situation. Adequate supplies were unavailable locally as a result of instability created by the Cary Rebellion, so he sent to Virginia and Pennsylvania for provisions. In order to avoid friction with the Indians, Graffenried paid them for the same lands that he had already purchased from the Carolina Proprietors. He then began to develop the settlement which he called Neuse Bern, or Bern on the Neuse. This was later corrupted by the English into the present name, New Bern. Lots of 250 acres, located primarily along the Trent River, were assigned to families, while artisans, including carpenters, blacksmiths, and shoemakers, were to reside in town. Graffenried designed the town in the shape of a cross, with the intention of placing a church in the center. After a shaky beginning, the settlement began to prosper; the combined total of Swiss and German settlers was approximately 400.

On 22 Sept. 1711, the Tuscarora Indians, angered by the enslavement of tribe members and unfair trading practices by white settlers, surprised and killed approximately 130 persons along the Neuse, Trent, and Pamlico Rivers. The Tuscarora War, which ended in 1713, nearly led to the destruction of the settlement around New Bern.

Graffenried fell deeply into debt and was unable to obtain provisions for his settlement. He returned to England in 1713, hoping to borrow funds. Unsuccessful, he gave up his colony as a failure. The Palatines lost their lands to Pollock, who assumed ownership as Graffenried's chief creditor. In 1749 they were granted equivalent lands, which were spread out over an extensive area, thereby effectively dispersing Graffenried's original settlers.

The small number of settlers remaining, after losses due to disease, war, and the hardships of the ocean voyage, intermarried with residents of other nationalities, and the Swiss-German community blended into the population at large. Their family names, however-including Metz (Metts), Kernegee (Kornegay), Eibach (Ipock), Mueller (Miller), and Kuntz (Koonce)-are still prominent in eastern North Carolina.