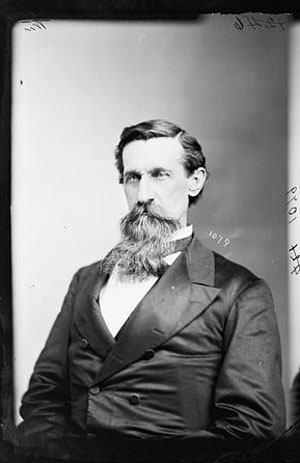 James Madison Brown Leach, lawyer, congressman, and advocate of education and internal improvements, was born at the family home, Lansdowne, in Randolph County, the son of William and Nancy Brown Leach. (He eventually dropped Brown as his third given name.) He attended the Caldwell Institute in Greensboro and entered the U.S. Military Academy in 1836 but resigned in 1838. Returning home, he studied law under his brother, Julian Elder.

Leach supported community efforts to establish a larger school to replace Brown's School House, built by his uncle John Brown. In 1839 he served on the committee that drew up a constitution for it, and he became secretary of the local educational society. Leach became a trustee of the new Union Institute AcademYork, Brantleyy and delivered the address at the laying of the cornerstone of the building. He also spoke on education throughout the region to attract support for the school. In time, the institute became a normal school and still later Trinity College. The college was moved to Durham, and in 1924 Trinity became Duke University.

Leach was admitted to the bar in 1842 and established a practice in Lexington, where he remained for the rest of his life. His renown as a defense lawyer, particularly in murder cases, spread far and wide. Of his seventy-one murder cases, it is said that he lost only one—the first. Stories about his victories and unusual methods on behalf of his clients were widely related both during his lifetime and afterwards. The Greensborough Patriot included reports on the quickness of his rapierlike repartee to hecklers on the hustings. He was much in demand as a political speaker and as a maker of policies. In 1974 master raconteur Senator Sam Ervin, Jr., broadcast one of the stories about Leach over the radio.

Early in his career, Leach had important connections in the nation's capital; his oldest brother, Martin W. Leach, was the son-in-law of Senator Willie P. Mangum, for some years president of the Senate. The younger Leach made local arrangements for the senator to speak in North Carolina.

As a Whig, Leach served from 1848 until 1857 in the North Carolina House of Commons where he advocated the causes of education and internal improvements, the outstanding legislation being the Railroad Act of 1849. In 1856 he was a Fillmore elector for his district. Two years later he was unanimously nominated by his party to run in a Democratic district for the U.S. House of Representatives against the incumbent and was elected by a large majority. In Congress from 1859 to 1861, he opposed secession and both spoke and voted against it.

Leach happened to be in the mountains speaking against secession when he heard of Abraham Lincoln's call on North Carolina for troops. Returning home immediately, he raised a company of more than a hundred men to fight for the South. He was elected captain of the company, but on its organization he became lieutenant colonel of the Twenty-first Regiment, North Carolina Troops. He fought at the Battle of Manassas and elsewhere until he resigned on 23 Dec. 1861 (perhaps because of his age) and returned home. In 1864–65 he was a member of the Confederate Congress and introduced a joint resolution approving the appointment of General Robert E. Lee as general-in-chief and recommending that he be vested with the power to treat for peace. From 1865 to 1868, Leach served in the state senate and was chairman of the committee that reported the rejection of the Fourteenth Amendment to the U.S. Constitution.

As a Conservative Leach served in the Forty-second and the Forty-third Congress (1871–75) but declined to seek a third term. He was presidential elector for the state-at-large in 1876 on the Tilden-Hendricks ticket and in 1880 on the Hancock ticket, both times being president of the electoral college. During these campaigns he spoke in most of the counties of North Carolina as well as in at least ten in South Carolina, contributing to the return of the Conservatives to power in that state. Leach served a final term in the General Assembly when he was senator from Davidson County in 1879–80. This time he was chairman of the committee of the special session called in 1880 to consider the sale of the state-owned Western North Carolina Railroad to a New York syndicate.

Leach served in the state militia where he became a major general. He came to be routinely referred to as General Leach, and he never lost an election. In 1846 he married Elizabeth Lewis Montgomery, daughter of the pastor of the Presbyterian church in Lexington; they became the parents of three daughters and four sons, but all except James Madison, Jr., died young. This son joined his father in the practice of law. Leach died in Lexington and was buried in the Hopewell Church cemetery near the old family homestead.

Jessie Owen Shaw, Johnsons and Their Kin of Randolph (1955).