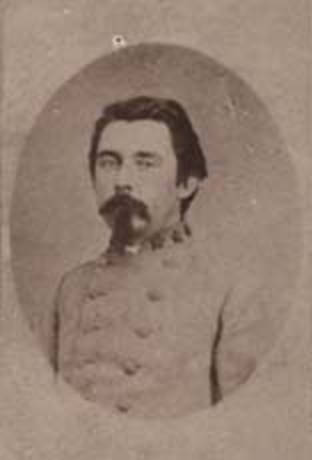 Thomas Stephen Kenan, lawyer, Confederate colonel, attorney general, and clerk of the North Carolina Supreme Court, was born in Kenansville, the son of Owen Rand and Sarah Rebecca Graham Kenan. He attended Grove Academy and the Central Military Institute at Selma, Ala., before spending a year at Wake Forest College. Afterwards he enrolled in The University of North Carolina as a sophomore and was graduated in 1857. There followed two more years of study at Judge Richmond Pearson's private law school in Yadkin County. In 1860, Kenan opened an office for the practice of law in Kenansville. In 1859 Thomas and his brother, James, organized a local militia company which they called the Duplin Rifles.

Three days after the attack on Fort Sumter, which marked the beginning of hostilities in the Civil War, the entire personnel of the Duplin Rifles volunteered for active service for the customary six-month period. The unit was designated Company C, Twelfth North Carolina Regiment, with Thomas Kenan as captain. Sent to the Norfolk, Va., area, the company saw little action as it was not equipped to respond to the long-range shelling inflicted in the region by Federal forces.

At the end of the six-month enlistment period, Company C was mustered out and the men returned home. Just before Christmas, 1861, the company was reorganized, but some of the men dropped out to assist in forming additional units. The Kenan brothers, however, remained with the company which was then designated as Company A, Forty-third Regiment, and so continued throughout the war. In May 1862 the regiment reported to Camp Mangum near Raleigh for additional training, but while there Thomas Kenan received word that he had been made colonel of the Thirty-eighth Regiment then being formed at Goldsboro. He declined the promotion, but soon was made colonel of his own regiment, the Forty-third. James became captain of the company in one of the rare instances in which two brothers served together as commissioned officers, one under the other.

For a time the regiment was stationed around Wilmington but was sent back to the Richmond, Va., area for service during a proposed advance by General Robert E. Lee into Maryland in September 1862. Some of Kenan's men were employed around Suffolk to prevent Federal movements in the rear of Lee's force. The enemy had occupied much of coastal North Carolina early in the war and moved up the rivers to Washington and Plymouth. In December, New Bern was threatened. The Forty-third was ordered to the Goldsboro area in a futile attempt to save a vital railroad bridge between there and New Bern. Although the bridge was destroyed, it was quickly rebuilt after Federal forces withdrew. Kenan and his men remained in the vicinity of Kinston to prevent further inland movements.

Kenan's regiment and the others in its brigade soon began the movement that was to be the most dramatic and tragic of the war, the taking of the Army of Northern Virginia into enemy territory in Pennsylvania in June 1863. His men were now seasoned soldiers, trained and equipped at the height of their military attainments, confident that war should be carried into the enemy's territory. At Brandy Station, a fierce engagement between opposing cavalry forces resulted in a Confederate victory. Kenan's regiment shared the spoils of at least one Federal cavalry storage area for some much needed supplies.

Movements were by now reasonably clear to everyone: General Lee was on his way to Gettysburg and the supplies that might well be obtained by a successful operation there. By way of Hagerstown and Chambersburg, Kenan's regiment reached the Carlisle Barracks, which it and the others occupied while making final preparations for the Gettysburg campaign, which began on 1 July 1863.

In the afternoon the Forty-third Regiment was a part of the force that carried the lines to Seminary Ridge and occupied that position, the Federals having retreated before the Confederate onslaught. Both sides suffered heavy losses, however. During 2 July infantry action under Kenan's command was minor, while the opposing artillery waged a heavy bombardment that became the talk of veterans for many years to come. General Lee's actual presence in full view of the fighting men was an encouraging bit of strategy.

At daybreak on Friday, 3 July, Kenan's regiment was chosen to lead the attack on Culp's Hill, passage to which was cluttered by fallen trees, boulders, and difficult terrain. The charge failed, and Colonel Kenan, wounded severely by a bullet in the leg, was sent to the rear for transfer to the hospital wagon train. He was among the many who were captured by the Federal forces crowding around the retreating Confederates, and on 6 July he was admitted to the army hospital at Frederick, Md. A month later he was transferred to the larger hospital at Baltimore where two more weeks of recuperation enabled him to move on crutches. He was then sent to Sandusky, Ohio, for commitment to the great Federal prison on Johnson's Island.

While these events were ending the war for Kenan, the South's great stronghold at Vicksburg, Miss., fell, in what many Southerners considered the turning point of the war, rather than the events at Gettysburg. But of more personal concern to Kenan was the raid carried out by the enemy from New Bern in which his family's sword factory at Kenansville was destroyed. When and how much he knew of this, of course, is unknown, but he was wounded at nearly the same time as the raid on Kenansville.

Both Thomas and James were at Johnson's Island enduring the boredom of inactivity and suffering through the cold of two winters. They joined other Confederate prisoners in attempting to tunnel a passage under the walls; however, after many weeks of labor and concealment of the rubble, their scheme was discovered and frustrated. The colonel somehow managed to secure a copy of Blackstone's Commentaries and was able to spend some of his time profitably in review and study.

In February 1865 Kenan was a member of a committee of prisoners who sought permission to establish a form of self-government within the prison. Their suggestion was favorably received, but the approaching end of the war prevented its implementation. Late in March the Kenan brothers were among about three hundred men paroled and sent to the vicinity of Richmond although not permitted to rejoin their former commands. They briefly toyed with the idea of participating in the Trans-Mississippi movement for a sort of Confederate government-in-exile, but the surrender of Lee at Appomattox and General Joseph E. Johnston at Durham nullified their plans. 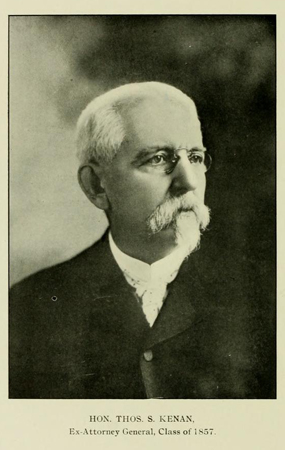 From Virginia Kenan made his way to Greensboro. On his arrival, the railroad to Salisbury was so badly damaged that trains were not running. He walked to Salisbury and took a train to Charlotte, where he found a kindly hotel keeper who provided accommodations. On 12 May he was officially paroled, and five days later he was back in Kenansville ready to resume a position of leadership in the community. Without loss of time he became a candidate for the General Assembly, was elected, and served in the sessions of 1865–66 and 1866–67. He then was a candidate for Congress in 1868, but by that time the political leadership of the state had changed and he was defeated.

In 1868 Kenan married Sallie Dortch, daughter of Dr. Lewis Dortch of Edgecombe County, and the following year they moved to Wilson. His law practice there flourished and in 1872 he was elected mayor and inaugurated a progressive administration. In 1876 he supported the gubernatorial candidacy of Zebulon B. Vance in a campaign that returned the Democratic party to power and elevated Kenan to the office of attorney general. He was reelected for a second four-year term. During this time he also served as reporter for the North Carolina Supreme Court.

Kenan rendered further service as a member of the board of trustees of The University of North Carolina, as president of the university's alumni association, and as a member of the executive committee of the Confederate Memorial Association. He also supported a movement that resulted in a Soldiers' Home in Raleigh. As the century drew to a close, plans were under way for a five-volume history of the military units furnished by North Carolina to the Civil War. To this work Kenan contributed a history of his regiment, of his brother's company, and of his experiences as a prisoner on Johnson's Island. The College of Medicine of the University of Virginia adopted a plan to have on its board of trustees members from the surrounding states, and for this Kenan was chosen from North Carolina. The North Carolina Bar Association also elected him its president for a term.

With no children of their own, the Kenans played host to many people and functions for eastern North Carolina. One of the most elegant such occasions was in connection with the marriage of Thomas's niece, Mary Lily Kenan, to railroad magnate, Henry M. Flagler, in 1901. Kenan's health gradually declined before he died at his home in Raleigh. He was buried in that city's Oakwood Cemetery.

Charles Frohman, "The Civil War Years," in A History of Sandusky and Erie County (n.d.).

Biographical History of North Carolina from Colonial Times to the ..., Volume 3, by Samuel A'Court Ashe, in GoogleBooks